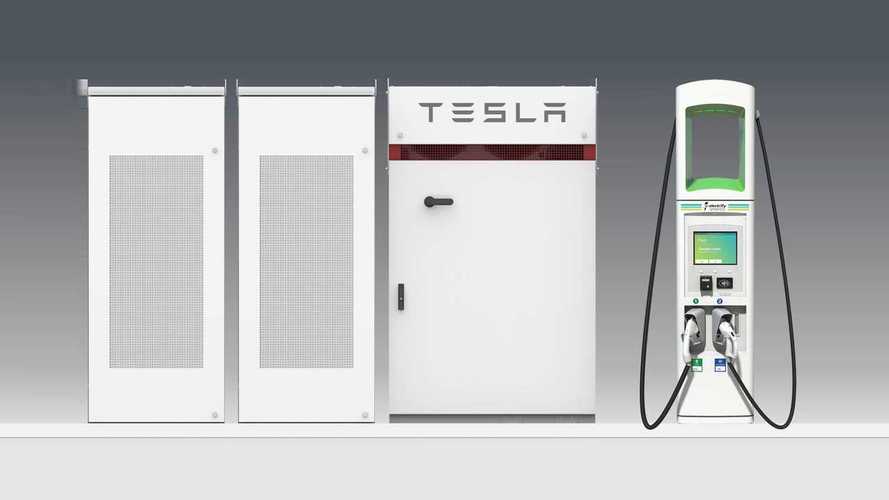 Electrify America today announced its plan to install Tesla Powerpack battery systems at more than 100 of their electric vehicle charging stations nationwide over the course of 2019.

Some may ask why onsite energy storage is necessary for EV charging, and the simple answer is demand charges. Demand charges are based on the highest draw the customer (in this case all the charging stations at one location) uses from the utility during a set period of time in a given month, usually carved up into 15-minute intervals.

Demand charges vary from utility to utility in the US, but they are so costly they make it nearly impossible for DC Fast charge stations to even break even, let alone be profitable. For example, I own and manage a 24 kW DC fast charger on my property in Montclair, NJ. I pay 12 cents per kWh for my electricity supply, but because the DC Fast charger pulls so much energy at once, I have to pay demand charges for it, pushing the cost of my electricity up well over $1.00 per kWh.

“Our stations are offering some of the most technologically advanced charging that is available,” said Giovanni Palazzo, chief executive officer of Electrify America. “With our chargers offering high power levels, it makes sense for us to use batteries at our most high demand stations for peak shaving to operate more efficiently. Tesla’s Powerpack system is a natural fit given their global expertise in both battery storage development and EV charging.”

Let's say a Chevy Bolt owner pulls up to charge their car at my station and they stay for two hours. I charge $6 per hour to use the station, which is what I consider a reasonable amount for lower-powered 24 kW DC Fast station. In those two hours, the Bolt will accept close to 50 kWh. My utility, PSE&G, will bill me about $60 for the electricity, and I billed the customer $12 for the charging session. Then ChargePoint takes their 10% network management fee, so I'm left with $10.80; a loss of about $50.00.

An Electrify America site like this one with 10 high-speed DC Fast stations will draw a lot of power. On site energy storage will allow for substancial long-term electricity savings

Having onsite energy storage allows charging providers to cut off, or drastically lower these menacing demand charges, thereby allowing the stations to operate in the black while still charging reasonable fees. They do so by setting the rate the batteries can recharge from the grid at a lower level, previously negotiated with the utility. Therefore, the utility never gets a spike in the power draw for that location higher than what they can plan for. "Shaving off" the high end of the power demand is valuable to the utilities. They will then lower, or even completely waive demand charges for the location if the high point of the energy draw isn't too high.

The reason we haven't seen widespread use of battery storage with EV charging sites has been the upfront cost. Network providers have done the math, and it was less expensive to just pay the demand charges, than it would have been to spend $50,000 to $100,000 for the onsite battery storage systems. Hopefully, this announcement means the cost is finally getting down to the point where it is becoming financially viable.

Each Electrify America site in this program will consist of a 210 kW battery system, with roughly 350 kWh of capacity. They have a modular design, and will allow for more capacity to be added over time. That will become necessary, once there are multiple EVs plugging in and pulling 150+ kW at the same location.

The decision for Electrify America to use Tesla's Powerpack system is a curious one, because Volkswagen, Electrify America's parent company, has been developing their own energy storage systems. Perhaps it's because Tesla is so far ahead that Electrify America can't wait until VW has a commercially-viable product to implement.

Tesla has also said they eventually plan to use energy storage at their Supercharger sites, and has done so in limited locations, but have yet to deploy such systems in any large number.