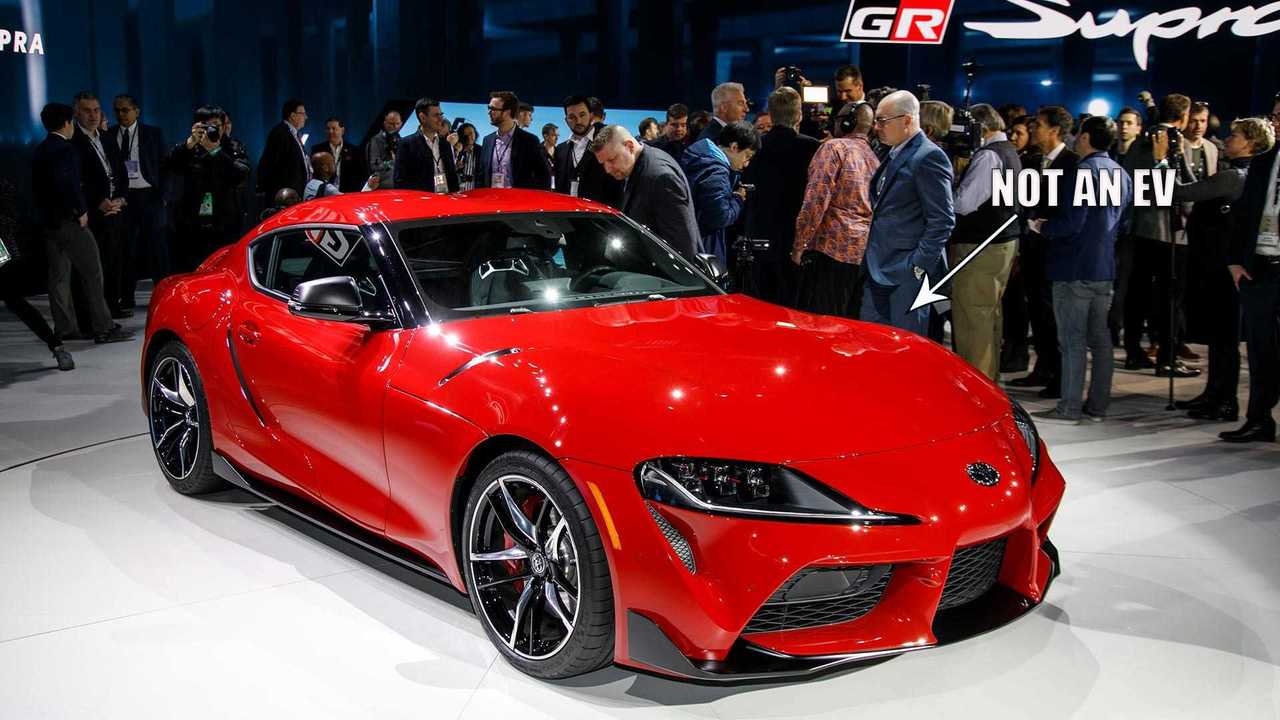 The 2019 North American International Auto Show (NAIAS) is in full swing in Detroit. Pretty much every automaker has an electric vehicle or two on its stand, of course. Infiniti is showing off its QX Inspiration crossover, Nissan has the IMs high-riding sedan, and even Chinese outfit GAC Motors is showing a fantastical Entranze concept. Meanwhile, at the Toyota display, the emphasis is solidly on its new Supra: a sportscar built on the bones of the BMW Z4. It is powered by gasoline, which appears to be just fine with North America president Jim Lentz, who believes the EV revolution is not really upon us.

Toyota To Select Dealers: Stop Delivering The Mirai, There Is Nowhere To Refuel

Toyota Exec Says Internal Combustion Engine Will Be Dead In 2050

According to The Detroit News, the executive said of battery-powered vehicles becoming a significant portion of the market,  "With EVs, I think it’s going to be a while. I think we’ve overstated our belief EVs will take over the world." As the kids say, this should age well.

He is aware, of course, of the success of Tesla in the space but thinks it's an exception. He pointed out that its Model 3 is the only offering ringing up over 10,000 sales per month. Meanwhile, of the other 94 "electrified" vehicles available, only half a dozen of those enjoy more than 2,000 units per month. The Toyota Prius Prime, second only to the Model 3 in sales, is one of those.

For electric vehicle advocates and potential customers, the seeming lack of awareness of the situation is frustrating. At the same time in history as Ford declares it will have an all-electric pickup truck, Porsche has sold out its first year of Taycan production long before the first one rolls from the factory, and Volkswagen has invested many billions in batteries and EV factories, Toyota seems blissfully unaware and unprepared.

In the past, Toyota officials have countered inquiries about its outlook on EVs with discussions of the hydrogen fuel cell future, but even there Lentz now seems kind of squishy. Complaining that the Japanese automaker hadn't racked up many sales of the Mirai (it's cumulatively sold about 4,804 units over four years) and infrastructure remains thin on the ground, he suggested the company was shifting its focus from H2 passenger cars to commercial trucking. Said he,

“Maybe the best place to get hydrogen into the market is in commercial vehicles. Then, when we build an infrastructure, we bring on passenger cars.”

As electric vehicle technology continues to get cheaper and improves -- think much faster charging times -- and cities continue to set limits on internal combustion, Toyota may find itself the loser in a multi-billion dollar game of musical chairs. Perhaps sooner than later.