BEVs Are Efficient: Use 80% Of Energy To Move Car Down The Road 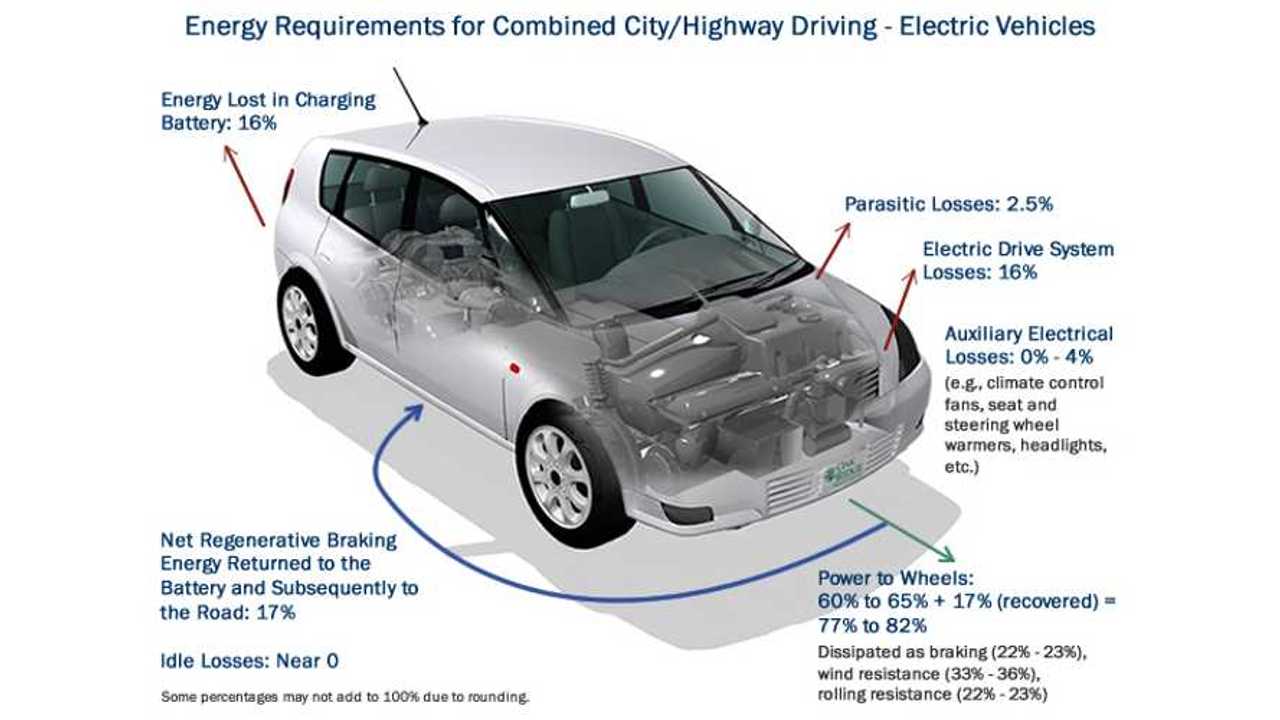 BEVs use around four-fifths of the electricity for motivation, while ICE use as low as 12%.

According to US DOE’s Office of Energy Efficiency & Renewable Energy, all-electric cars are very efficient at turning electricity into movement.

The study shows that 77%-82% of energy put into a BEV is used to move the car down the road. That is despite about 16% being lost during charging (we thought it's much less like 5-10%).

A big part in the result comes from regenerative braking, which alone improves efficiency by 17%:

The rest of the energy is lost or used for auxiliary purposes. The efficiency of conventional cars is the opposite, with the majority of energy put into the tank being lost.

"Unlike conventionally fueled vehicles, electric vehicles experience a loss of energy during "refueling," with an energy loss of about 16% from the wall power to the battery during charging. However, electric vehicles are otherwise highly efficient delivering 60%-65% of the energy from the wall power to the road even before energy is reclaimed through regenerative braking. When energy gains from regenerative braking are included, the amount of energy used for traveling down the road can rise to more than 80% in the EPA-combined city and highway driving cycle."

Comparatively, here's what the DoE says in regards to conventional vehicles:

Not all of the fuel that is put into a car's fuel tank is used to move the car down the road. In fact, only 12-30% of the energy put into a conventional car is used for that purpose. The rest of the energy is lost to engine inefficiencies or used to power accessories. The amount of energy loss varies depending on the type of driving – city, highway, or combined city and highway. The engine losses, such as exhaust heat and pumping, are higher for city driving than for highway driving. There are no idle losses in highway driving, but losses due to wind resistance and rolling resistance are higher for highway driving than city driving. All in all, there is great potential to improve vehicle fuel efficiencies with advanced technologies, such as advanced engines and hybridization, that address these losses.

And here's a nifty little graphic to see where all those loses come from: