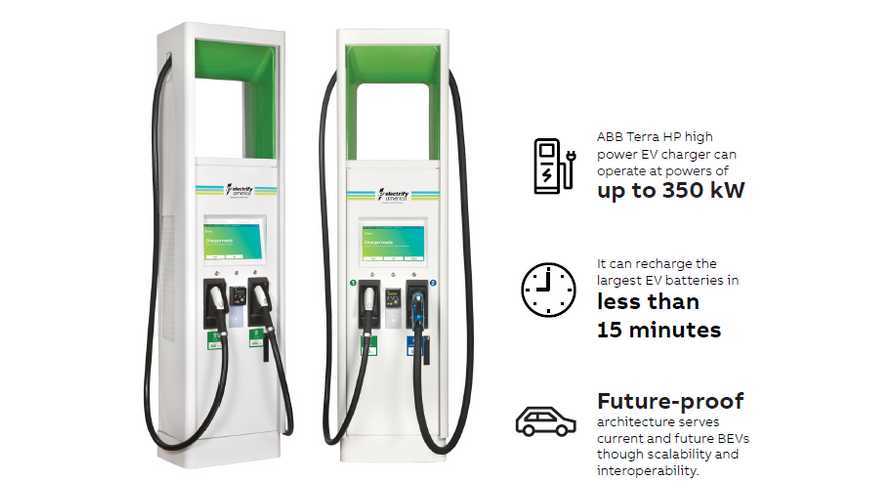 Electrify America installed several of its first ultra-fast charging stations in the U.S. with power output of 150 kW or 350 kW.

The 150 kW of charging power, in theory, should enable one to drive 125 miles (200 km) after just a  15-minute recharge (if the car accepts such a level of power and energy of is 40 kWh). The 350 kW more or less doubles the charging performance.

Currently, there are not many models that would accept anything beyond 100 kW (especially for longer than a few minutes), but soon it will be common at least in the high-end part of the BEV market (150 kW Audi e-tron, 100 kW Jaguar I-PACE, Porsche, Tesla and more).

Electrify America intends to install 2,000 DC chargers at 484 locations by the end of 2019, and we believe that a decent part of those will be these ABB units. The initiative's highway-based phase must be completed by the end of June 2019 or Volkswagen faces a fine for not complying.

Here is what ABB has to say about the ultra-fast chargers for Electrify America:

ABB’s Terra HP chargers have been installed at the first three Electrify America locations to open as part of this landmark infrastructure project, with many more charging sites to come this year.

Unveiled in Chicopee, Massachusetts as well as Fincastle and Reston, Virginia, ABB’s Terra HP charging systems are now ready for use by drivers of all electric vehicle (EV) models available in the US.

While not many EVs can charge at 350kW yet, these sites are future proof, serving both today’s battery electric vehicles and those in the future that may benefit from improvements in battery technology. This will enable fast charging times for even the longest range EV’s.

“A few years ago, the idea of putting 350kW of direct power into a consumer’s hand was considered unheard of,” says Frank Muehlon, Head of ABB’s Global Business for Electric Vehicle Charging. “Now we have created a new standard for high power charging with next generation vehicles.”

Growing battery sizes have increased demand for faster charging. “Several years ago, when DC fast charging was first introduced, the idea that an EV could charge in less than 30 minutes with a 50kW DC fast charger was a significant step forward.” Muehlon explains. “But new EVs have batteries three or four times the size of those original electric vehicles, making the fast, convenient and flexible charging essential to EV ownership. The way to achieve this is to dramatically increase the power delivery, and ABB has worked closely with many vehicle OEMs and suppliers to push this technology where it needed to go.”

The need for a robust, higher power charging network will increase as demand for fast charging capability keeps pace with the development of vehicles carrying larger batteries for longer distances travel. Electrify America is now filling this need, creating a nationwide network of high power charging systems that will connect the west coast to the east coast, and aggressively fill in locations across the Plains, Great Lakes and Southern States, that previously hadn’t benefitted from a high number of corridor connected charging points.

“ABB is working hard with Electrify America to deploy stations like those in Chicopee and Fincastle throughout the United States,” added Muehlon. “We feel very proud to have achieved many firsts when it comes to EV charging infrastructure. Over the last decade, we deployed the first DC fast charger in Europe, the first CCS protocol compliant chargers in many countries, the first country-wide network in Estonia and installed the first 150 kW charger in the United States last year. With Electrify America’s historic investment in US charging infrastructure, we can now claim another first with the launch of 350kW high power public charging in the United States.”

Creating innovative, state-of-the-art and reliable solutions, which are scalable to expand and flex with its customers’ needs, is at the heart of ABB’s philosophy. Ideally suited for use at highway rest stops and petrol stations, Terra HP’s ultra-high current design has the capacity to charge electric vehicles up to 1,000V at full power.

As part of its $2 billion investment over the next ten years in electric vehicle infrastructure and education, Electrify America plans to place chargers on its highway routes at intervals of no more than 120 miles (195 kilometers), meaning drivers across the US can be confident they'll be able to reach their destinations with ease.