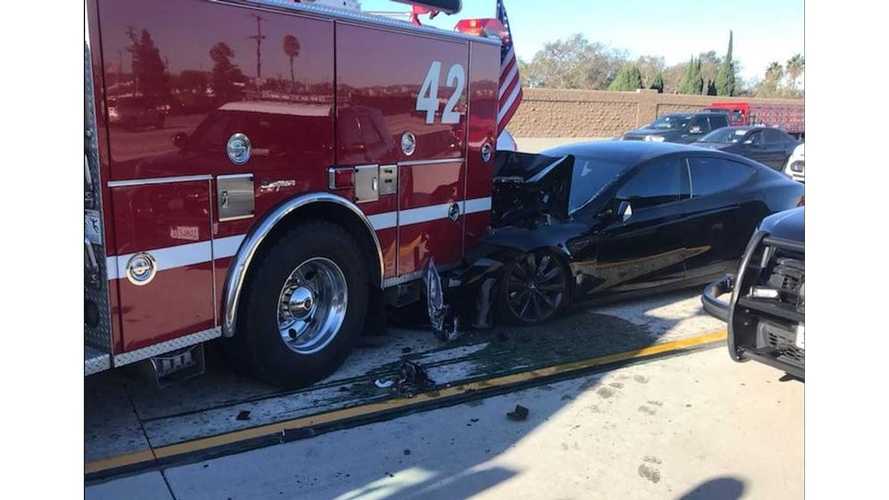 It comes as no surprise that a Tesla Model S ran into another stopped fire truck since the vehicles are not programmed to stop for stationary objects.

***UPDATE 2 - May 17 - Logs of the incident have now been released. We've embedded them (via Tweet) directly below:

***UPDATE - The driver of the Tesla admits to being on her phone at the time of the crash. She says Autopilot was activated.

Interestingly, if any other vehicle ran into a parked fire truck, we probably wouldn't hear a word about it. However, Tesla's Autopilot semi-autonomous technology is under much scrutiny these days after the recent Model X fatality, followed by other recent incidents. Perhaps the more interesting part is that people are reporting that it is Autopilot related, while this information has not yet been verified.

Related: Tesla Autopilot And Other Braking Systems Are Blind To Parked Fire Trucks

Reportedly, the Model S was traveling 60 mph and didn't brake for a fire truck that was stopped at a red light. Police have no idea if Autopilot was engaged, but anyone driving 60 mph and not applying the brakes when approaching vehicles clearly stopped for a red light is a major problem.

Even if Autopilot was engaged prior to the incident, it was surely the driver's job to come to a stop at a red light ... right? The police statement said:

"Witnesses indicated the Tesla Model S did not brake prior to impact."

The crash happened in South Jordan, Utah, a suburb of Salt Lake City. Authorities are still trying to figure out the cause of the crash and have said it may be days before they have any further information to share. South Jordan Police Department Sergeant Samuel Winkler reported:

“For unknown reasons, the Tesla failed to stop for the traffic at the red light and ran into the back of the Unified Fire Authority vehicle at 60 miles per hour.”

Funny that a Tesla crashes and it makes the news. But when hundreds of regular cars crash each day, there's nothing special about it. https://t.co/s8GPhvr2IV

The only information the authorities have released thus far is that the driver didn't seem to be under the influence. At the time of the crash, the roads were wet from light rain. The collision resulted in air-bag deployment and the driver's right ankle was broken. The fire truck driver was unharmed.

Information from the driver's statement to the police should be released this week. We will keep you apprised as more details become available.