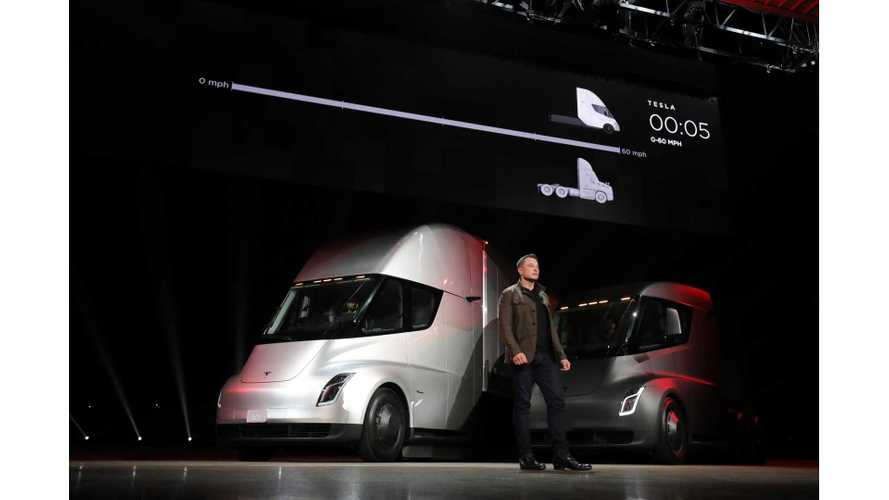 Reuters exclusively revealed some details on the fast charging infrastructure for Tesla Semi electric trucks, that are scheduled for market launch in late 2019.

At the unveiling, Tesla announced a Megacharger network that will mirror its Supercharging network for cars.

The high-power stations are promised to replenish 400 miles of range (640 km) or 80% of the 500-mile version of the truck in 30 minutes. The power requirements will be tremendous, like up to 2 MW per single stall.

Tesla announced that the stations will be solar-powered (probably with energy storage) and electricity will be offered for just $0.07 per kWh), which makes it hard to imagine how those stations will be financed (as the price of the Semi seems too low to cover costs of the vehicle - see our InsideEVs exclusive analysis).

According to Reuters, Tesla is in talks with customers that pre-ordered the Semi. Those talks center on building a  charging infrastructure at customers sites - it will be the first, base step we believe (just like home charging for private electric cars).

"Tesla is collaborating with Anheuser-Busch, PepsiCo and United Parcel Service Inc to build on-site charging terminals at their facilities as part of the automaker’s efforts to roll out the vehicle next year."

"Details of the partnerships, which have not been disclosed previously, are still being hammered out, but include design and engineering from Tesla, the companies said. They declined to disclose what portion of the building costs, if any, Tesla would pay, or whether Tesla would be compensated for its work."

The power, costs or even who will pay for the Semi charging equipment remains unknown. The electric bus industry gives some indications related to costs, with examples like $249,000 for six fast charging stalls, but the Tesla Semis could need more power than buses.