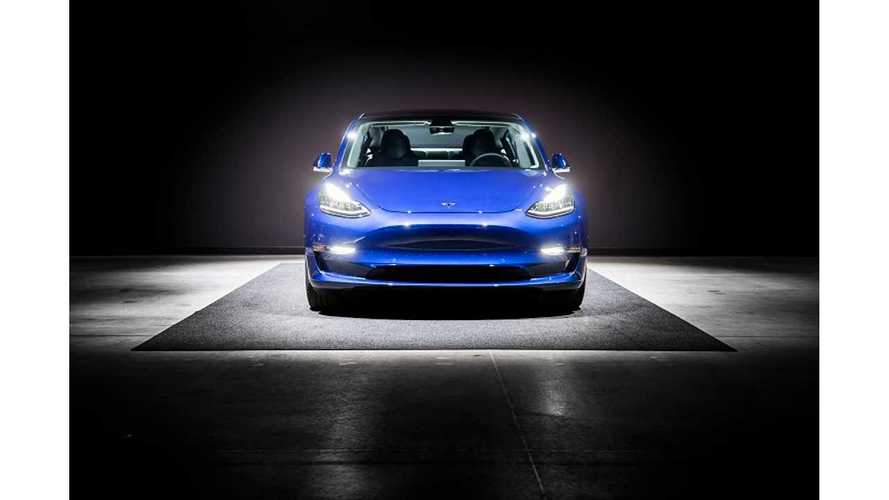 I am a current Model S owner living in Florida that waited in line to make a reservation on March 31, 2016. In order to expedite my delivery, I decided to take delivery of my Model 3 in Fremont. That decision was a bit of a gamble, but I figured if it didn’t get me the car earlier, I could always change my mind and have the car delivered to me in Florida. I received my invitation to configure on November 21, 2017, and immediately configured my Model 3. When you are done configuring the vehicle, the vehicle requests a registration State and a delivery Zip Code. I entered Florida for the registration state and a California zip code for the delivery.

Many have asked how the assigned VIN is communicated. It only shows up on your Tesla Account between the Model 3 reservation number and the price. I did not receive an email or telephone call telling me that the VIN had been assigned.

Anxious to take delivery before the end of the year in order to receive the tax credit in 2018, once the VIN was assigned, I immediately contacted my local service center to see what the next step would be. I was told that the car was in Fremont and ready for transport, but that they had no delivery information here locally and that I would have to discuss with my Delivery Specialist, who had just been assigned.

I contacted my Delivery Specialist. He confirmed that the car was ready to deliver ASAP at the Fremont. With the holidays a few days away, and the fact that I needed to drive cross country to get back home, I decided to push the delivery back to December 27, 2017. I attempted to schedule delivery early afternoon, but the only time slot left available was 6:30 PM, which I took. I asked my Delivery Specialist if I was able to obtain a factory tour since I was picking up in Fremont. He confirmed that Tesla provides Tesla owners with free factory tours, but unfortunately, the factory was closed for tours between Christmas and New Year.

I scheduled my flight and made arrangements to spend the night at my friend’s house in San Francisco. He picked me up at the airport. We had lunch and did a quick tour of San Fran, before heading to the Fremont Delivery center. We took the train from San Francisco to Fremont. After an hour train ride, I got off the train, went down the escalator, and as I was attempting to schedule my Lyft ride, I got a call from my Delivery Specialist with some bad news. They had been preparing my car for delivery when a service light came on. I asked what that meant with respect to my delivery, and he responded that I would not be able to leave with the car without the issue being resolved, but he had no information on what was wrong with the vehicle or how long it would take to correct.

I explained that I had woken up at 4:00 am, had been on planes all day, and that I had just gotten off of an hour train ride to pick up my car. He understood the situation and was apologetic, but could provide no further information. I told my Delivery Specialist that I had a meeting in Los Angeles the next day and needed to get down there somehow and that I was willing to take another VIN with the same specs either in Fremont tonight or L.A. tomorrow morning. There were no firm commitments, but he promised to do whatever he could.

When we arrived at the Delivery Center, a cheerful and personable concierge at the front desk greeted us. She was unaware of our situation but would go check on the status of my vehicle. To make matters worse, a professional photographer was waiting for us at the Delivery Center to take pictures of the car to post on my Turo listing.

After a few minutes, I was greeted by my Delivery Specialist and several other Tesla staff and personnel that all assured me that they were looking for another vehicle and would do everything they could to make the situation right. After a few more minutes, the Delivery Specialist came back with a set of keys, and told us to take a P85D loaner anywhere we wanted to go for dinner and to bring back the receipt and they would cover the tab. He was hopeful they could locate a Model 3 with my specs and deliver tonight, but needed about an hour to be sure that it was possible. The photographer, my friend, and I loaded into the Model S and headed out to find the best restaurant we could find in the area for dinner.

After dinner, we headed back to the Delivery Center, for an update on the status of my delivery. When we walked in, we were greeted with good news. They had located another vehicle with the same specs, VIN 228X. Tesla was detailing the car and revising all of the paperwork for me to re-sign, and then I could take delivery of my vehicle. I signed all of the paperwork, and I was walked out into the closed doors of the delivery floor with black walls, concrete floor, and spotlights showcasing the cars ready for delivery like fine museum art. I quickly spotted this beauty as I walked out onto the floor.

The next 1.5 hours were torture, as I waited for the photographer to find the perfect light, locations, and filters for his photographs while I stared at my car from the distance in order to not cast a shadow on it for the pictures.

While we waited, we decided that they should give me the vehicle walkthrough on another vehicle, in order to minimize prolonging the delivery even further. The gentleman that gave me the walkthrough was very knowledgeable about the vehicle and its features. One thing he mentioned, that goes against what I’ve seen elsewhere on the internet is that you do close the frunk with two hands on either side of the ‘T’. He was aware of a rumor that you could close the frunk with one hand, but he said not to believe that and to always use two hands in order to not warp the hood.

By the time we drove off, it was 12:30 AM PT, which was 3:30 AM back in Florida. I had been up almost 24 hours straight at that point and was completely exhausted. I didn’t have the willpower at that point to go over the car with a fine-toothed comb, but it looked to be in great shape from a quick walk around. The next day, I did notice that the front of the frunk hood sits up a little higher than the bumper, which is not good for rock chips or aerodynamics. I am hopeful that is a minor adjustment that my local service center will correct.

Although hopefully, my delivery was an anomaly, it is good to know that Tesla was committed to doing the right thing and keeping me happy. It was a long night, but in the end, the car and the service that Tesla provided despite the difficult circumstances were perfect.

My only remaining question is - Scott, where is my reimbursement for dinner???

If you are in the Tampa Bay area and are interested in renting my Model 3, it is available here: https://turo.com/rentals/cars/fl/largo/tesla-model-3/357822

A look at the rear-seat in the Tesla Model 3 (Image Credit: Turo)

The number one question I get asked is about the tax situation if you take delivery in CA. Unfortunately, it appears that a lot of people are misinformed about this, including my Tesla Sales Advisor, that warned me that if I picked up in California that I would be subject to double taxation. After researching myself, and speaking to a tax attorney, I became confident that Florida recognizes and credits sales tax paid in California.

So, although I did pay a higher sales tax in California, I am not paying sales tax twice. Unfortunately, it appears that whether you will be taxed by your home state and California varies by state. So, check with your state’s Department of Revenue and Department of Motor Vehicles before taking the plunge and scheduling delivery in California.

Hat tip to Turo for taking the amazing, professional photos and allowing us to share them!

Stay tuned for a follow-up post recounting the Model 3 road trip from California back to Florida.