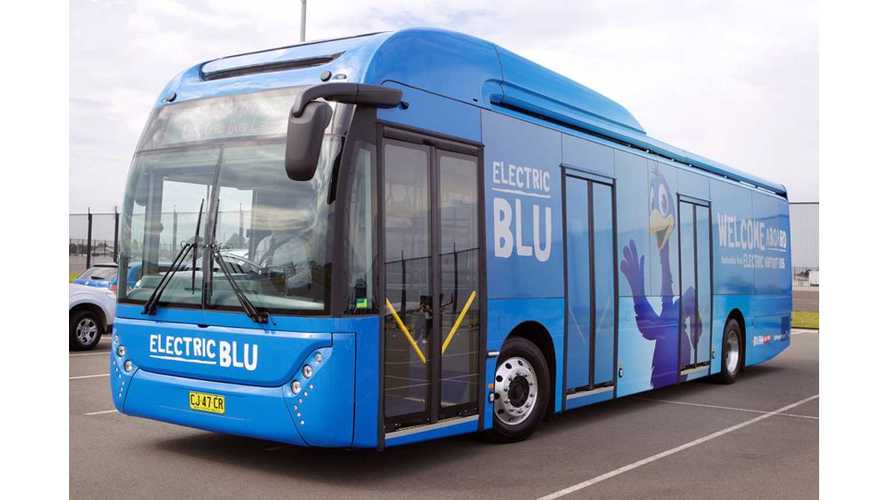 Sydney Airport has introduced Australia's first electric airport bus - one of six that will be operating on-site by the end of this year.

The Toro bus was produced jointly by BYD (naturally) and Carbridge.  According to BYD, the range of the ebus is good for up to 400 km (250 miles) while carrying 70 passage and all their gear.

"The Electric Blu bus is the first of a fleet of six electric buses to be operational by the end of this year, replacing the airport’s existing diesel bus fleet servicing the shuttle route between the T2/T3 terminal precinct and the Blu Emu Car Park."

"The Electric Blu bus has a carrying capacity of 70 passengers, features purpose-designed luggage storage racks and has a range of 400km on a single charge. Sydney Airport has invested in charging stations and other ancillary equipment to support the deployment of the new electric bus fleet.

The airport is also currently trialing electric cars as part of its ground transport fleet and investigating solar-powered charging stations to further decrease carbon emissions, while research and development is underway for recycling and reuse of batteries and other components."

“We’re proud to be the first Australian airport to introduce electric buses to our Parking and Ground Transport operations, which will reduce our carbon footprint and enhance the passenger experience,”

“These state-of-the-art electric buses can make up to 100 transfer journeys on a single charge, providing a clean and sustainable transport option for the two million travellers, visitors and airport workers who use the Blu Emu shuttle service every year.”

“Carbridge is delighted to deliver to Sydney Airport this country’s first electric airport bus and in partnership with BYD we are excited to be at the forefront of electric bus manufacturing in Australia,”