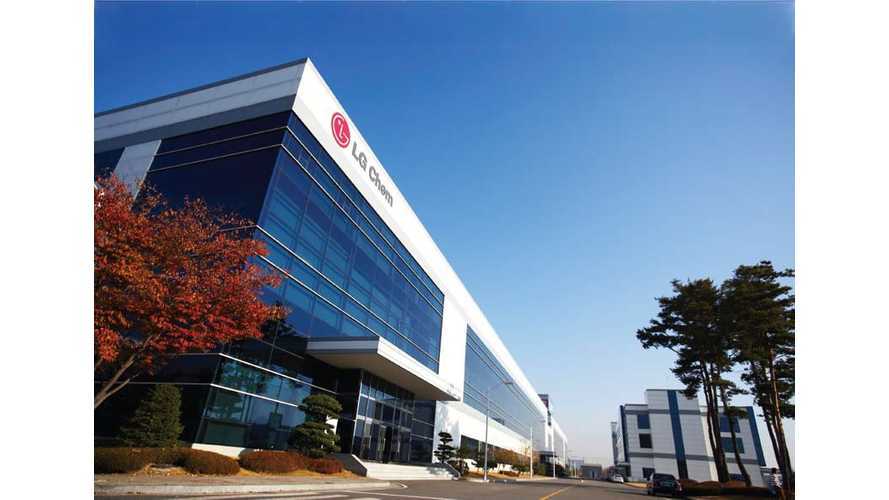 LG Chem in several years has attracted the most carmakers to use their batteries, hence the question about their success. LG Chem said that the key is in chemicals, the materials and in the roots of the company.

"Charged: What’s your secret? How has LG Chem been able to secure so many contracts with big automakers?

Dr. Prabhakar Patil: We are the only battery company that’s chemicals- and materials-based. Most of the others are electronics companies that have gone into the battery space. The critical factor for batteries is materials. Getting to cost competitiveness is not just a question of scale or reduction in material costs, it’s also about improving the characteristics of the materials. That’s what we do well, and at the same time, we have the economies of scale."

Parent company in Korea - LG Chem - has over 400 engineers working on batteries.

Dr. Prabhakar Patil said also that they are moving forward step by step, which is well illustrated by the Chevy Volt example, which almost every year got a slightly improved battery.

The second reason is scale and attractive prices for carmakers. Big numbers stand at: "over 50 million cells on the road in more than 300,000 vehicles."

Should we expect new chemistry beyond lithium? According to LG Chem, probably not.  Instead, LG Chem is focusing on improving lithium-ion batteries:

"Charged: How much time do you spend thinking about the next-generation battery technology, beyond lithium?

Dr. Patil: Not very much. The reason is pretty simple – it’s basic chemistry. Lithium is the third-lightest element, and the lightest metal.

The only thing that’s lighter is hydrogen, but as a gas it’s very difficult to work with because you cannot move it around. You lose a lot of it if you try to pipe it. If you try to use it as a liquid you lose a lot of the energy advantage. And helium is inert.

So, lithium is the next best thing for batteries and it will remain lithium in some form for a long time. There could be a future in lithium-metal batteries, like you hear some people talking about, or some other variant. Lithium is very effective in terms of being energy-efficient both from a volume and a mass basis.

Right now, there is a lot of focus on improving the cathode, because that’s sort of the limiting factor. But as you improve the cathode, the anode sooner or later will become the problem, and that’s why people are looking at the silicon type of anode. These improvements will continue to happen, and they won’t be in one huge step. There will be enough smaller steps added together that when you stand back, you will see a large reduction in costs."

Moving costs down is one of the priority.

"Charged: At some point, driving out costs will come down to finding more efficient ways to get the raw materials, correct? How far away are we from that point?

Dr. Patil: Yes, but we’re not quite there. There are still more engineering improvements that can be made. Not as much in manufacturing, because if you look at the cost structure of cells, somewhere around 60% of costs are related to material costs. That’s material costs for the cell manufacturer as purchased material. Some of that is driven by economies of scale and by the performance characteristics of the material.

I think there is quite a bit to be gained in terms of reducing the net material costs, while getting the same performance out of the cell, through better engineering, customizing of the materials, tweaking their properties and so forth."

You'll find several more questions and answers in the source article linked below.