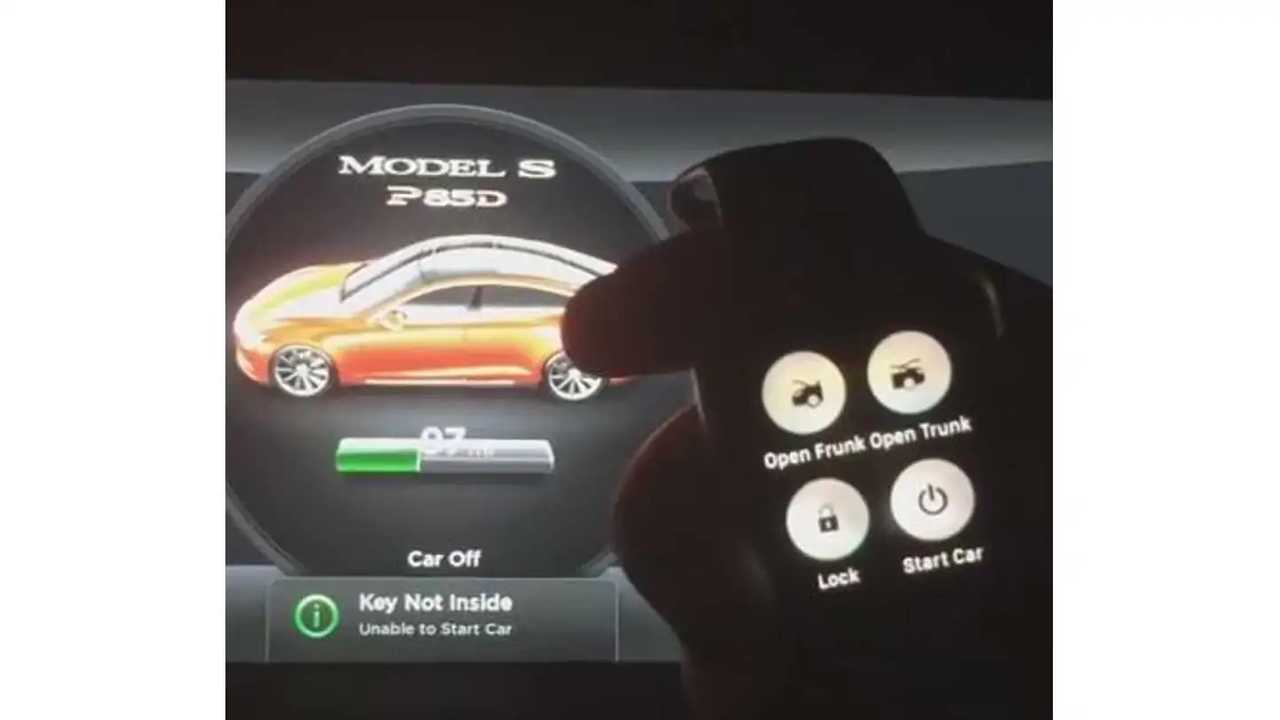 The video description posted below tells the entire story, but basically what you'll see in the video is near full control of the Tesla Model S from an Apple Watch via the Remote S app created by Allen Wong of Rego Apps.

The world's first documented case of someone unlocking and starting a Tesla with just an Apple Watch app. The watch has almost full control over the car from opening the roof to turning on the air conditioning. And the craziest part is that this can all be done remotely. You don't even need to be near the car to issue the commands. It's all communicated through the internet. The Remote S app was created by Allen Wong of Rego Apps LLC.

The Remote S app is not yet available in the App Store! I will post the App Store link to my social media when the app is approved by Apple. I shot this video when the app was very close to completion, so the app will more or less look like this. But I will probably change a few things before the final product is shipped.

Let me know what you think of the app in the comments. I spent the past 3-4 days coding it non-stop after I got my Apple Watch in the mail. When I really like a new project, I work non-stop until I'm close to completion. I think I lost three lbs in the process.

Was it worth it?

Financially? No. There are very very few Tesla Model S owners who also happen to have an Apple Watch. I'd make very little money off this app. For the amount of time I spent on it and the expected amount of money I'd make from it (I'm guessing $100), I basically worked for $1 an hour or so. I was fully aware of this when I started learning how to create this app. I didn't expect any money out of it. It's just a fun hobby. And it was quite fun to make this app. I had an eureka moment when my Apple Watch finally made my car honk its horn. It was the first command I gave my car, because I was in my bedroom and the car was in my garage (100 ft away). When I heard that faint honking sound, I jumped up from my bed and hugged my dog. He probably thought I was being crazy again.

Why does it say "Mobile phone charger" on the top?

That's actually the name I gave my Tesla. The Apple Watch app is simply grabbing the name and displaying it so that the user knows which Tesla it is referring to. I call my Tesla a mobile phone charger, because I tend to use it as giant battery pack for my phone... and it's mobile.

I originally didn't want an Apple Watch. When I tried to order it, the estimated shipment date was in June, and I wasn't sure where in the world I'd be in that time frame (I travel a lot). But, Apple was nice enough to send me an Apple Watch on April 28th for being an app developer! Only con is that they didn't let me choose the model. I'm guessing that they had a surplus of this particular model, because it's the 42mm version (so probably geared towards older bigger men), and it's baby blue (so probably geared to younger kids). It's a strange combination. I'm going to swap out the band as soon as they let me order a new one.

DISCLAIMER: Tesla Motors Inc. and Apple Inc. were not involved and did not endorse neither author nor Rego Apps LLC in the creation of this application