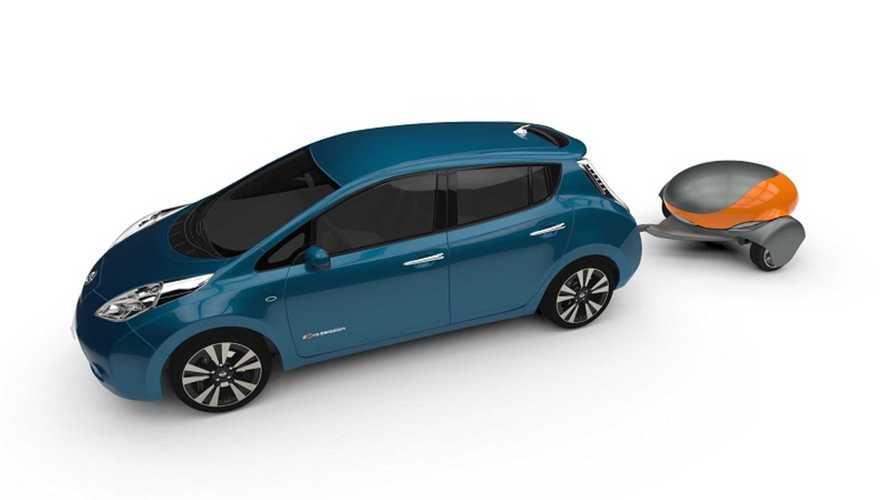 Nomadic Power (often referred to as eBuggy) is a company from Germany that is developing range extender trailers for highway rental systems, which would enable electric cars to have infinite range.

The main concept is to use a high capacity battery trailer instead of a long range EV and then to find available fast charging stations along the route. When you need to do a long trip, you just rent the trailer and leave it at another station.

"Nomadic Power will offer Nomad batteries for rental at major arterial roads across the country. And, Nomadic Power enables the utilisation of clean energies: Pick up an Nomad at a highway fast charging station and exploit the electric energy of the Nomad. Return the Nomad to a station in your destination area. Drive with your own electric car battery within your destination area. It's so easy. Let's change the look of highway traffic."

The concept egg shaped version with an 85 kWh battery pack could extend the range to over 500 km or 300 miles. On the Nomadic Power's website, we find 40 and 60 kWh versions and this, of course, reminds us of the original Tesla Motors battery pack options.

Features of the Roadside Assistance Nomads:

It's unclear if Nomadic Power can directly deliver power supply, as vehicles available on the market don't have the option to charge them while driving, nor do they have a special connection inlet for external power sources like trailers. We believe that this is a serious obstacle for now.

Nomadic Power stated that to use the stations, first users will need to buy and install a special connection kit compatible with the trailers.

The trailer itself probably will be limited in terms of top speed. We found that an early prototype was homologated in Germany for 100 km/h or 62 mph (however, the final version could be rated at a higher speed).

How does it work?

You’re driving with your electric car in the city or for commuting. Now, you want to make a long range or a highway ride:

In technical terms, the Nomadic Power is a so-called on-demand range extender. It will be hitched up to an electric car for long-distance travel. Nomadic Power works in the following modes:

Nomad will be developed as an external range extender with a powerful lithium-ion battery for energy storage – focusing on a future with a purely electrical infrastructure. Nomad is licensed in Germany for a travelling speed of 100 km/h.

Nomadic Power exchange has many advantages compared to other battery-changing concepts:

Bonus - Testdrive with very first prototype from a few years ago:

"The first lap has been completed. The Nomadic Power prototype was finished and has proved successful. Nomadic Power is starting the second lap: test series development and network trials."