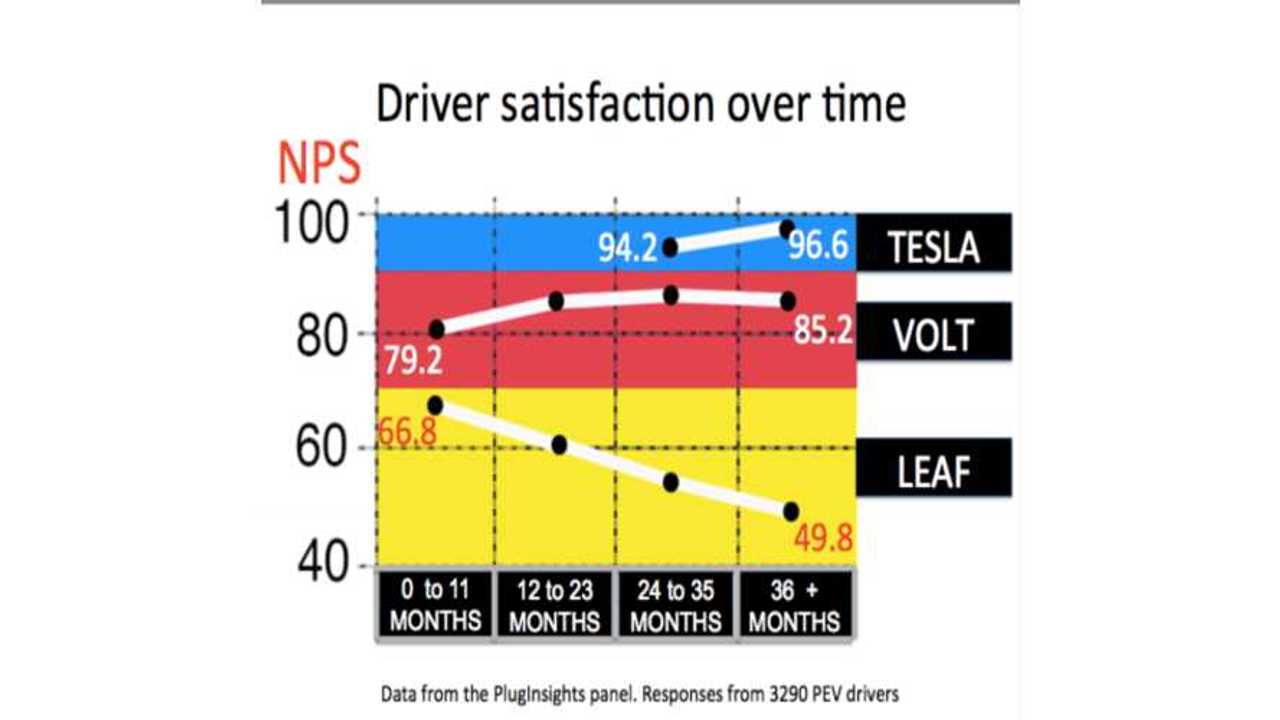 Some early research findings by the research division of Recargo, PlugInsights Research, offers a look into the maturing electric car market as car leases start to end for early adopters.

So, when an industry receives great feedback on a new product offering: it will 1) began a marketing strategy to introduce this new product to a larger audience in hopes of increased sales volumes 2) or sit on these new market trends so it does not cut into its main product?

At this week’s Electric Drive Transportation Association’s annual conference in Indianapolis, Ind., Norman Hajjar, managing director at PlugInsights Research, unveiled new data on the topic of “veteran” electric vehicle drivers and how this technology is viewed by current EV consumers in a market research breakout session.

How did PlugInsights Research come to that conclusion?

During its research for a Net Promoter Score (NPS), used in many industries as a way to track direction of a product or brand introduction, it showed that there will be 32,250 electric cars in their third year by May 2015 and in May 2016, 95,716 cars will be three years old.

Hajjar says,"The category is still quite young, with the modern era starting in December 2010 with the intro of the Leaf and the Volt. But some rather seismic ‘age-related’ events are waiting in the wings for this category.”

The third year is the typical lease length and so what will current electric car owners do at the end of their lease term?

From a research panel of more than 8,000 EV drivers, Hajjar says, “around 24% of today’s EV drivers expect to part (lease ends) with their vehicle in the next 24 months.” PlugInsights estimates, conservatively, that more than 45,000 vehicles will have their lease end in the this time period.

So, PlugInsights posited the obvious question to its audience on whether EV drivers will sign another lease for an electric car or go back to a traditional internal combustion engine (ICE)?

1.9 percent of the respondents said that they would return to a ICE car. The regional sample was not provided at the time of the presentation, but the percentages could be skewed in favor of EVs a bit if most were from California.

Those are heavy implications for automakers and electric car technology.  What will Audi, Toyota and other non plug-in supports do with this data? Maybe a real electric car strategy?

The NPS score for Tesla Motors went up from 94.2 to 96.6, Volt increased from 79.2 to 85.2 and the Nissan Leaf declined from 66.8 to 49.8. Hajjar adds,"The low LEAF NPS score is still excellent when compared to the top ranked auto brands.” Reasons for the small downward trend for the Leafs could be some “battery degradation” issues.

Hajjar, a market researcher with experience in other industries, says,"These are way above (ICE) automotive averages. The Volt is unbelievably healthy and Tesla NPS number has never been seen in any industry.”