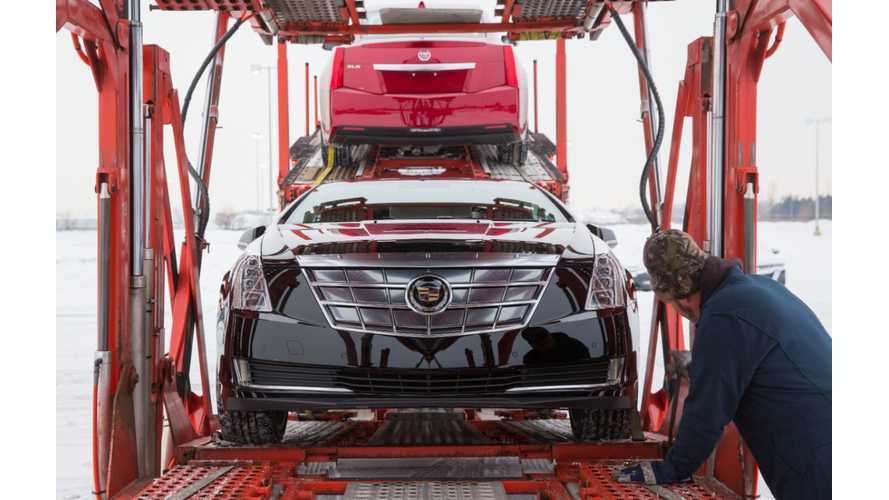 Some Cadillac ELRs Get Loaded Up Outside GM's Hamtramck, Michigan Assembly Facility On December 17th, 2013

How many times have you heard this one?  "Automaker ships plug-in electric car early!"

If you said never, you would be probably be spot on - that is at least until this month as new Cadillac ELRs left GM's Hamtramck, Michigan plant on December 17th, 2013 - a month ahead of schedule.

And while GM did managed to start 2014 with about 60 available for sale, they did also sell 6 copies in December.  The Cadillac ELR starts at $75,995.

Of note: There is also a limited edition, 100 vehicle run of  Saks Fifth Avenue ELRs available from $89,500 if exclusivity is your thing

So, just how many copies of the 37 mile extended range Cadillac will GM ultimately produce and sell in 2014?  It is still way too early to tell.

However, as this is the debut month for the ELR, we can now re-issue our totally obscure, but oddly satisfying (and not statistically relevant in any way)  "Top Plug-In Cars Debut Month Sales Results" list:

The Chevrolet Volt Leads The Way For Debut Month Sales at 326 cars, the Chevy Spark EV Checks In A Little Lower at 27 Sold.

Other comparisons of note between the Cadillac ELR and Chevrolet Volt:

Cup Holder Of The Future Today!