Comparison Between Kona Electric And 1.6T Shows Another EV Burden 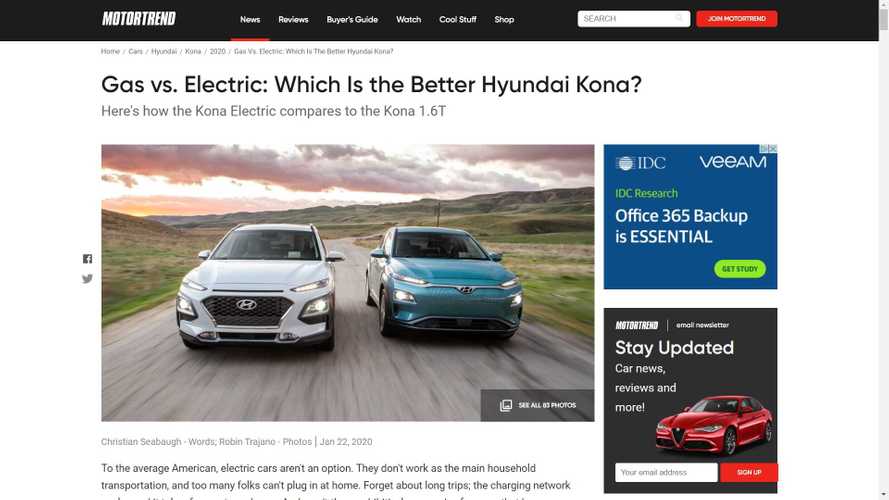 And you thought depreciation could be a problem…

We could not expect how much attention our article on AAA findings would have. Sadly, because it showed that depreciation can be a real problem for EV owners. Hopefully, because most of our readers understood it was – more than anything – a call for action. If we want electric mobility to progress, EV depreciation has to be smaller than the one ICE cars present. Pretending there is nothing wrong will lead nowhere.

A witty MotorTrend article goes in the same direction, even if it can be seen in a negative light by the ones that prefer to deny the challenges that lie ahead. The American magazine saw an opportunity no one has taken before: comparing the same vehicles, but with different propulsion systems. The first one to properly offer that possibility in the US is the Hyundai Kona.

You can claim that Volkswagen sold the e-Golf and that GM had the Chevrolet Spark, right? The problem is that both were more compliance cars than high-range EVs, respectably comparable to that of their combustion-engined siblings. The Fiat 500e? The late Sergio Marchionne even asked people not to buy it.

The Kona Electric has a 64 kWh battery pack that allows it to run 258 mi on a complete charge, according to EPA. Even if it is impressive by EV standards, it still does not beat the Kona 1.6T range of 396 mi, also based on EPA numbers.

If that was not enough, MotorTrend took both cars on a trip from Los Angeles to Paso Robles, a 220 mi journey that would be equivalent to going from Chicago to Detroit, according to the article’s author. Google Maps tells us you’d face 281 mi in the best-case scenario and 304 mi on the worst. Their comparison to a drive from New York City to Washington, D.C. seems more appropriate: 227 mi.

While the Kona 1.6T spent $63.03 with gas for the whole trip, the Kona Electric required $140.97. That’s a 123.7 percent difference, mostly due to fast charging rates at Electrify America EVgo.

The challenge-deniers will undoubtedly say that fast charging is more expensive, that the results are obvious, etc. But MotorTrend’s proposition was to travel with no planning, as they can do with a combustion-engined car. And to treat both vehicles in the same way.

Apart from that, the idea is to make EVs better options than ICE cars. If fast charging is the way to make long trips instead of battery swapping, for example, why is it still so expensive? Due to network expansion costs? We wrote an article about that last December: Dennis Wang showed Supercharger use is also not as affordable as it should be.

If charging were made at home, it surely would have been much cheaper. MotorTrend made the calculations and concluded it would have spent $25.87 for the whole trip. On the other hand, the journalists would have had to wait 575 minutes, or 9.6 hours. Refueling took the Kona 1.6T ten minutes.

If that's any consolation, the magazine praises how much more refined the Kona Electric is compared to the gas-only version. It also concludes that planning a trip with an EV is still a requirement to save money, especially considering the peculiarities that exist on charging, as the DÆrik YouTube channel explained earlier in January.

Read the article when you can. It is really interesting. Thanks to it and AAA, depreciation and charging costs would be on the top of our list of things that hamper EV adoption. May EV manufacturers start to consider them more seriously than they currently are.

If you're a Hyundai Kona Electric owner or perhaps have questions for someone who is, drop by our growing Kona community over on InsideEVs Forum.