AAA Survey Shows EV Owners Should Be Concerned About Depreciation 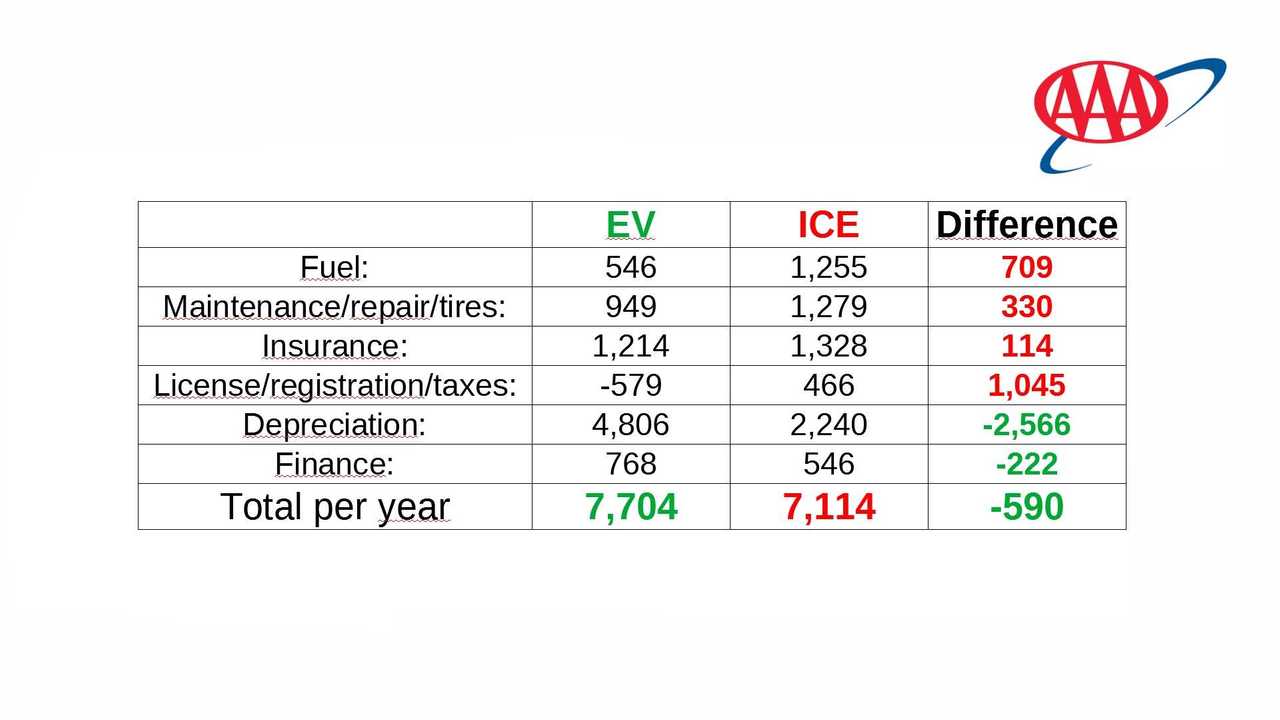 High battery pack prices and fast degradation have to be addressed for the sake of EVs.

AAA made a really positive press release on its latest survey about EV ownership. Anyway – and regardless of what the association decided to focus on, we had to cover the most critical info that it brought. As you already know, the survey revealed it is more expensive to own an electric vehicle than a regular car – even with tax credits. We asked them for the full data, and depreciation came up as the bad guy for this to happen – by a large margin.

Before we talk about the $590 difference – not almost $600, as we reported earlier – check the information provided by AAA in our gallery.

As you can see, the total annual cost of ownership for an EV, considering all six factors the association analyzes, is $7,704. A similar combustion-engined car demands $7,114 every year. Did you see EVs even give you money in one of these factors? It is “License, Registration, And Taxes.” Instead of spending $466, like in an ICE vehicle, you get $579 from the government.

This amount of subsidy is almost equivalent to how much more you would spend with an electric car, right? As you will notice, the problem is the $4,806 depreciation EVs have when compared to the $2,240 depreciation a combustion-engined vehicle has.

It may sound like the wrong conclusion in light of recent articles we have written. The Tesla Effect is making luxury vehicles depreciate more quickly than before. Some studies even claim EV depreciation is lower than the ones we see on ordinary cars. Well, that is only true if Tesla models are included.

When we check the methodology AAA followed, we see the association did not include a single Tesla. The evaluated EVs are Chevrolet Bolt (LT), Hyundai Ionic Electric (Base), Kia Soul EV (+), Nissan Leaf (SV), and Volkswagen e-Golf (SE).

The cars that make EV ownership look more expensive due to depreciation are all from legacy manufacturers. Not by chance, some of them are from brands that charge up to €30,000 for a battery pack replacement. That surely helps to explain why people shy away from them when they are not covered by warranty anymore.

Even Tesla may have issues with the lawsuit against the update that restricted range and supercharging speeds. Fast battery degradation is still a concern for all companies selling electric cars, hence the longer warranty periods for them.

For used EVs to be seen as possibilities and not as liabilities, these automakers have to worry about used ones as much as they do with the new vehicles. Or stimulate aftermarket solutions that do not push people to throw their EVs into the junkyard if their batteries fail.

The only company that does not seem to suffer from the depreciation problem when it comes to EVs is Tesla. People that cannot afford to buy one new wait as long as it takes to have a used one. Some even purchase salvage units to recover them, as Rich Benoit did with Delores.

While EVs from other companies do not reach the same status, we’ll probably keep seeing adverse outcomes for electric mobility as a whole. Such as the sad truth that, perhaps apart from Tesla vehicles, it is more expensive to have an EV than a car that burns gasoline.