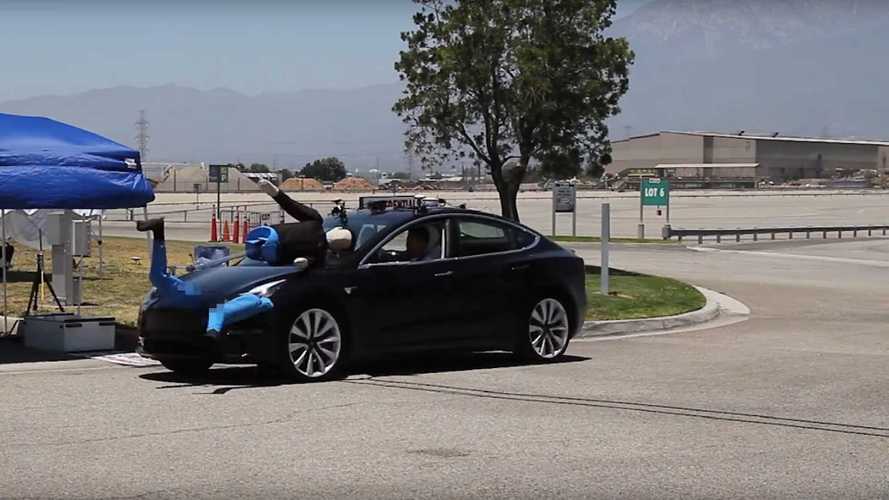 Automatic emergency braking with pedestrian detection turned out to be ineffective most of the time.

The Tesla Model 3 is considered one of the world's safest passenger cars ever made, after receiving top notes from safety authorities on three continents.

As the Model 3 active safety features were one of the key systems to achieve such outstanding results, it comes as a surprise that Model 3 failed miserably in the latest AAA's test of Automatic Emergency Braking with Pedestrian Detection.

Tesla Model 3 Has Better Headlights Than Most Cars, According To IIHS

AAA tested four mid-size sedans, which all fell below expectations passing the test only on some of the tries at a speed of 20 mph (32 km/h) during the day:

Higher speeds or night time (when in fact it's harder to see a pedestrian) were a really terrible idea from the dummy's perspective.

1.When encountering an adult pedestrian in a perpendicular crossing scenario:

We are not sure about the AAA's methodology, but the most striking thing is that the Model 3, which shined in Euro NCAP tests, wasn't able to automatically brake to avoid the collision with the pedestrian in a series of five measurement tests. It's irrational as the car detected dummies from the distance and alerted the driver - the missing action was to simply brake earlier than just ahead of impact.

Toyota Camry at least managed to score a positive result at 20 mph five times, followed by three successful tries by the Honda Accord.

The overall results and incomprehensibly poor result of the Tesla Model 3, in particular, was presented in an excellent video by The Tech of Tech:

Feel free to leave us a comment on what do you think about the automatic emergency braking and such a poor score for the Tesla Model 3.