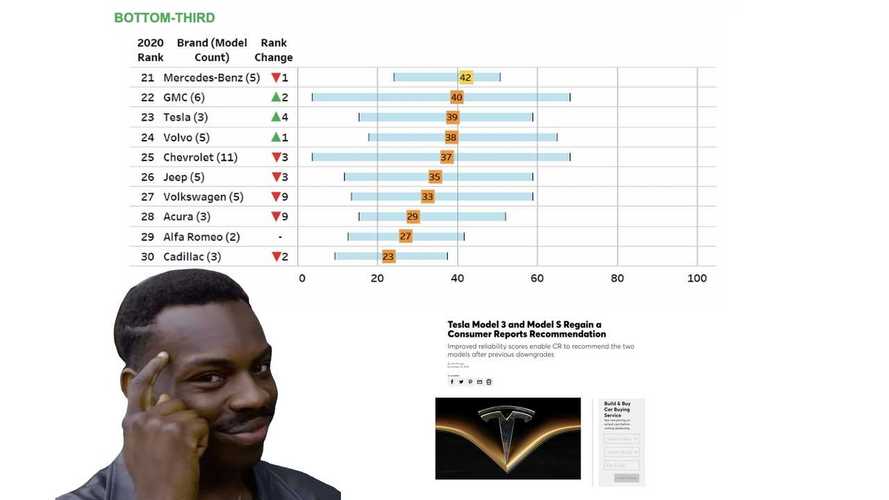 The score for the cheapest Tesla went from 24 to 59. The Model S barely made the cut.

On November 17, we published an article about Consumer Reports’ 2019 Reliability Survey and the fact that the magazine gave a Recommended status to the Tesla Model S and the Tesla Model 3. At the time, we wanted to clarify some doubts we had about it and we're glad to tell you we managed to chat with Jake Fisher, CR’s senior director of auto testing. He addressed all the concerns we had and even gave some good news to Tesla fans.

Our main doubt about the survey was how could a company that was in 23rd among 30 car brands have 2 of its 3 models as Recommended vehicles. Presumably, that would put it in a much better position, but the fact is that the Model X, with a score of only 15 points, did drag the company down. It was among the ten least reliable vehicles of the survey.

CR achieves the score for the brands by adding all its vehicles’ points and dividing them for the number of models involved. We only had the number for the Model X and estimated the Model 3 and the Model S had around 51 each. Well, they didn’t.

The Model 3 lost its Recommended status when it got a 24 score in 2018. In the 2019 Reliability Survey, it managed to get a 59 score, with 35 more points. It is 145.8 better than the previous rating. In other words, it more than doubled its score in a matter of one year.

The Model S had a much less remarkable recovery. It had a 31 score in 2018. Better than the one presented by the Model 3, by the way. In 2019, it got a 41 rating, enough to classify it as “Average,” according to Fisher. That is the least a car must offer in terms of dependability to earn a Recommended rating.

“We transform the Reliability Score to a 100-point scale for the ease of understanding and comparing. There are five rating categories assigned:

The improvement the Model 3 got is even more significant when confronted with this table. For only two points, the most affordable Tesla did not earn the “Better than average” assessment. Which would be like celebrating a B instead of a C-, as we mentioned in our previous article. The Model S, on the other hand, almost had a D.

When added, those numbers give us a total score of 115. Divided by three, Tesla ended up with 38.33 score. Out of CR’s goodwill in rounding that up, the official number became 39. More severe teachers would give it just a 38, which would result in a tie with Volvo.

Those improvements were not reported in all Tesla Model 3 or Model S units, just the brand-new ones.

“We rely on what is actually happening on the field. When we see these things in the field, that is when they are going to influence reliability. Let’s take the case with the MCU, where the older models are having problems. Tesla has said it has changed that for the brand-new ones rolling off. Our Recommendation is talking about ‘do I buy a new vehicle?’ We’re not recommending the used models. We separate the new and the used. Those vehicles that may have a problem down the road are vehicles we did not recommend buying new in the first place.”

Checking CR’s 17 trouble areas list, we were also concerned about the way the magazine evaluates pure electric cars. It seemed there is not a specific scale for their evaluation.

Is a battery pack problem considered as an electric system issue or as a major issue, as it should? What about any MCU matter? Will it be included in the last item of the list, the in-car electronics bucket? CR’s senior director of auto testing told us to rest assured that they properly weight all that even if the magazine does not present a list for EVs.

“Inherently, it is a lot simpler than with an internal combustion vehicle, and we do see very few battery or motor problems with EVs. Historically, we have seen some problems. The Honda Civic Hybrids at one point actually had a fair amount of problems with their batteries and we were not recommending them at the time because of that. Because we weigh that quite heavily.”

Anyway, we still see a lot of paint issues with the Model 3. All units we inspected, even freshly delivered, had the top of the left front fender touching the frame on the A-pillar, which may cause the rubbing of these components and lead that part to rust. Is CR considering that? According to Fisher, it is.

But how does CR weigh that sort of problem? If you check its trouble areas list, it is not one of the most severe. But a lot of these paint issues combined may be equivalent to something bigger.

“If you have a bunch of small problems or a few big problems, our look is the same. Actually, it is refreshing to hear this because, for a while, we have not been recommending the Model 3. And I have been hearing nothing but ‘it’s just paint problems, why aren’t you recommending this vehicle? The car is still reliable. That is not a reliability problem.’ A lot of people have told us they do not consider that as a reliability problem because the car still goes. It’s different points of view. I appreciate hearing from all sides, but the way I look at things is that, when you purchase a new vehicle, you don’t have to have this sort of problem. That is not something you have to put up with, especially when you are spending quite a lot of money on a new vehicle. We will continue to weigh these problems. Anyway, we absolutely recognize that a paint problem is not as serious as ‘the engine does not start.’”

Although Tesla enthusiasts often see this as “short-sellers’” or “FUDsters’” news, this is obviously not the goal of CR’s Reliability Survey. On the contrary, according to the magazine’s senior director of auto testing.

“When we started reporting problems from our survey, I had the perspective that without letting people know of these problems, they are not going to improve. Maybe it is a message to consumers, maybe it’s also a message to Tesla. And it says: ‘If you want us to recommend these vehicles to people, you got to get this stuff fixed. It is not something that consumers want.’”

Speaking of which, another concern we had with the Recommended rating was that CR considers owner satisfaction as one of its components. How does it avoid passion to interfere with an objective assessment of problems? Fisher gave us a very good explanation about that.

“For sure there is a lot of goodwill. Certainly, Tesla owners are enthusiastic about their vehicles. They tell us that, despite these problems, they would absolutely buy them again. But keep in mind that we are not asking if they think their cars were reliable, nor if they were satisfied. We’re simply asking about the experiences and we are making the judgment based on these experiences. Even very enthusiastic owners want to tell us their stories: good, bad, or different. And they tell us the truth. Some of the cars that people are most enthusiastic about are the least reliable ones.”

Fisher also stressed that the reliability survey does not consider sales numbers. This is why there is no reason to think Teslas are underrepresented. We brought that up in our previous article to explain the survey had no relation to sales numbers, but perhaps that was not very clear.

“There is a smaller amount of Teslas on the road then there are Toyotas. We don’t really do any compensation to try to make it seem that there are more Teslas.”

Consumer Reports is not a company. It is an organization. The fact that it was previously known as Consumer Union tells a lot about its mission. It is funded by its members, consumers like you, and respected for its editorial independence. That said, it is a relief to see it is treating electric vehicles in the correct way. We think it is appropriate to end this article with something they have in their “About Us” section.

“We are passionate about our work because we know how much is at stake for you. We succeed in our mission every time your family gets a little bit safer, your finances get more secure, new technologies get more trustworthy, and the future gets that much brighter. Together we are creating a safe, fair, and transparent marketplace.”

We at InsideEVs share that same spirit, even when we do not have good news to report. We're glad that was not the case with this article.