We Drive The Hyundai Ioniq 5: It's A Tech-Filled Winner

We get behind the wheel of Hyundai's impressive electric car.

Chic design, charging at up to 350 kW, a highly variable interior and numerous techie gimmicks, from the head-up display with augmented reality function to bidirectional charging to the solar roof: with the Hyundai Ioniq 5, the electric car offering the best of all worlds has arrived.

We tested the car and were curious whether we would find a fly in the ointment of this electric car.

***Editor's note: This first drive review comes to us from InsideEVs Germany. You can check it out in German here.

I had two hours in the car. Hyundai put the top version of the Ioniq 5 with all-wheel drive right in front of the apartment. This variant has a 70 kW motor at the front and one with 155 kW at the rear, so a total of 225 kW or 306 hp - a lot of grunt, just as much as the all-wheel-drive versions of VW Group's electric cars.

I drove a bit of the Autobahn with the Ioniq 5: the forward thrust is good, but it doesn't knock you back into the seat. However, this is only a first impression. In addition, the normal driving mode was activated, while the accelerator pedal reacts more strongly in Sport mode. After all, the acceleration hardly slackens even above 100 km / h, as is the case with less powerful electric cars.

Otherwise, there are steering wheel paddles with which you can adjust the strength of the recuperation. There are three modes plus a one-pedal driving mode, which Hyundai calls the i-Pedal. It works great, you just let go of the accelerator before the traffic lights and the car brakes to a stop. My favorite mode for the city.

The chassis seemed a bit clumsy and hard on uneven ground. When I said this to the Hyundai employee, he said the last journalist said the chassis was soft. That may have been a protective claim, but it could also refer to cornering behavior. And because of the routes driven, I can't say anything about that.

If you look at the Ioniq 5 in the official pictures, you might get the idea that it is a hatchback sedan. Our size comparison with a Volvo XC60 shows that it is an SUV:

I skipped a few points, especially getting in and driving off. So, the Ioniq 5 has flush integrated door handles. They fold out when you press them, unfortunately not when you approach them with the key in your pocket.

To drive off, you turn a knob. The pre-production model that was delivered, however, still had recognizable electronic problems. So the mode often jumped back from D to P. In addition, the recuperation modes could sometimes not be activated. Well, there is still some time until the market launch in early summer.

The tested top version has a 73 kWh battery. Its range should be slightly below the specified maximum range of the Ioniq 5, which was specified as 470-480 kilometers. My power consumption after a little more than 40 km was 17.7 kWh / 100 km. This results in an approximate range of around 410 kilometers.

I would have loved to try the charging, but the first charging station that I found with my navigation system didn't exist, the second (right in front of BMW world) has apparently only recently been working for BMW employees and the third was at a Mini factory site.

But now there is something much better: a complete charging curve for the Ioniq 5 including analysis . The result: The charging time of 4.5 minutes specified by Hyundai for recharging a range of 100 kilometers is realistic, and the average charging power in the important range of 20 to 80 percent is around 150 kW - that's really fast.

As is well known, the Ioniq 5 has two displays next to each other which, unlike Mercedes, do not pretend to be a single "widescreen". We were absolutely won over by the brilliance of the displays. The graphics are also clear and intuitive.

One of the really useful gimmicks of the Ioniq 5 are the camera images that appear when the blinker is set; they apparently eliminate the blind spot:

The backrests of the front seats can be put back very far so that you can take a nap in the Ioniq 5 - but we didn't have the time for that. To activate the function, you press a button on the electric seat adjustment, then the seat automatically moves back and tilts the backrest backward. It is not very intuitive that you have to press the button not just once, but twice in a row. The Hyundai employee showed us that we wouldn't have come up with it on our own. The operation of the air conditioning settings is also not very intuitive.

The space in the rear can be adjusted to a certain extent because the seats can be moved lengthways. In the rearmost position, the knee room is princely for me as a 1.76 meter long person, the headroom is good.

The trunk also looks large and is easy to use. However, I was disappointed with the tiny frunk. At most, it can be used as a secret compartment for valuables or for the charging cables, for which there is of course a space under the loading floor in the rear trunk.

There were a dozen items left on my to-do list to check off. For example, the bi-directional power outlet on the charger. It does not open to the rear, but it extends down instead.

There is also a socket under the rear seats, where you can charge your notebook on longer journeys or power some equipment while camping:

The car also had the solar roof, with which the range can be increased. Unfortunately, the power currently being generated is not displayed, which would be a nice feature. At least the cumulative performance can be called up on the touchscreen.

Another feature is the head-up display with an augmented reality function. The system with the blue-green directional arrows that indicate the turning point appears to be identical to the AR-HUD from VW. It apparently works well, I didn't notice any annoying sluggishness, but I didn't drive a roundabout either, where you could probably tell.

The Hyundai Ioniq 5 delivers a lot of what it promises. I was really excited about the car, which is rare. I got out with the feeling: The car is full of high-tech.

I couldn't try the real highlight of the car, charging at 350 kW. But that is what more knowledgeable people did: Our charge analysis showed that Hyundai is not over-promising, because the car could actually be charged from 10 to 80 percent in 18 minutes.

The usable trunk, the ample space in the rear and the high variability inside also deserve praise.

And the fly in the ointment? Well, let's assume that the electronics issue will still be fixed before the market launch. Then there are still a few points of criticism in terms of intuitive operation, such as the air conditioning settings, the activation of the relax mode and maybe also the door handles. But otherwise ... Hyundai has earned an A. The Ioniq 5 is a winner, 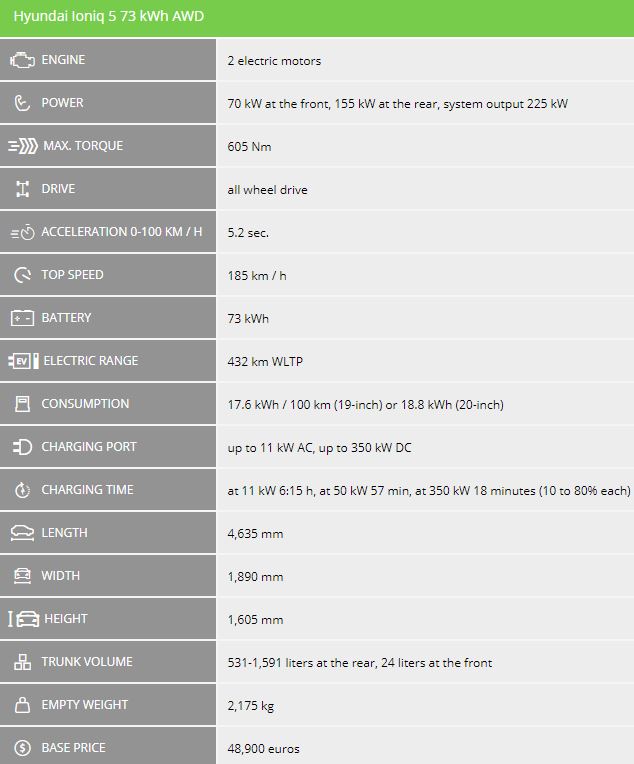 28 Photos
By: Dr. Stefan Leichsenring
Published by: Eric Loveday
++
++
Got a tip for us? Email: tips@insideevs.com