It literally tramples the Audi e-tron, despite a smaller battery.

Here we have a real treat for EV enthusiasts - a comprehensive, fast charging analysis of the brand new Hyundai Ioniq 5, based on the real-world data provided by the Hyundai Motor Group.

Unlike the previous artificial example, this time we can take a look at charging results of Hyundai Ioniq 5 from 10% to 80% State of Charge (SOC) in South Korea on April 20, 2021, at an outside temperature of 19°C and the battery temperature of 15°C (initial, we guess).

"*This video is the actual instrument cluster of the IONIQ 5, recorded during ultra-fast charging at Hyundai EV Station Gangdong (Gil-dong, Gangdong-gu, Seoul) at 12:00pm on April 20, 2021 (Tuesday).

Here we would like to highly appreciate that Hyundai Motor Group provided such an informative video with details in the description - great job.

The outcome is simply amazing, far above any other charging curve in a mainstream electric car. It literally tramples the Audi e-tron, despite a smaller battery. Let's get into details!

It seems that Hyundai very closely monitors the battery temperature and adjusts the power immediately.

The average power in the very important range from 20% to 80% SOC is 180 kW, which is 80% of the peak value. Another sign of how amazing the Hyundai Ioniq 5's charging capabilities are. 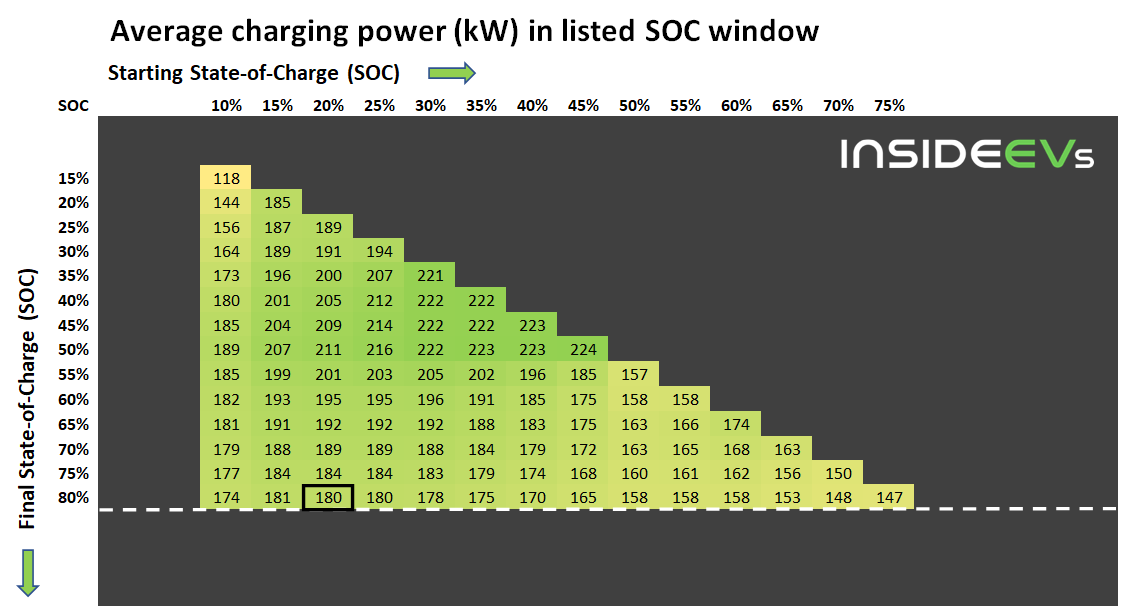 The peak C-rate* - charging power in relation to the total battery capacity of 77 kWh - is about 2.9C.

Both numbers are very high, and noteworthy is that the peak is available for a relatively wide window of SOC.

The real-world charging session reveals an even higher average rate of range replenishing than in the example that we analyzed several days ago. It's amazing 25 km/minute (15.5 miles/minute) at peak, between 30-51% SOC, and the average of 20 km/minute (12.4 miles/minute) is an outstanding value.

Here is our ultimate charging card for the Hyundai Ioniq 5 that shows an estimated time of charging to add a certain number of SOC percent points, average charging power, added energy and added range for listed SOC ranges. Click here to enlarge the image.

This one matrix shows us how much EV charging improved during the last 10 years (50 kW CHAdeMO) and Hyundai Ioniq 5 clearly offers a state-of-the-art result. 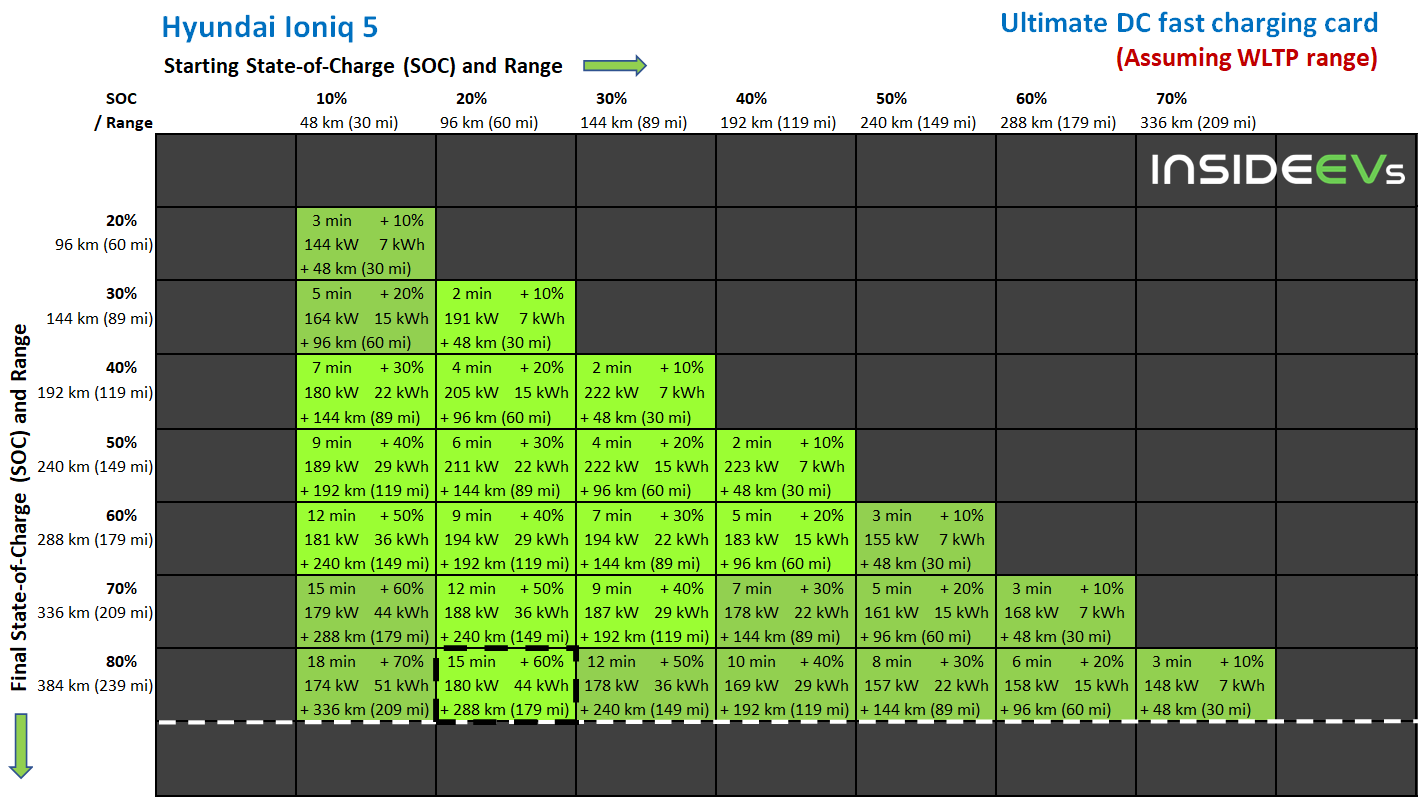 And now it's time for a duel between two heavyweight contenders in terms of fast charging. Hyundai Ioniq 5 against the well-known Audi e-tron quattro 55 (2019 version data).

The South Korean newcomer charges at a higher power than the Audi e-tron for most of the SOC, its battery pack is 10% smaller (77 vs 95 kWh). Hyundai Ioniq 5 has higher peak and average (20-80% SOC) values.

An interesting thing happens at 70-80% SOC, where both charging curves not only are at similar charging power, but also decrease at a similar SOC - like they would have the same battery characteristics (or at least the same strategy), that requires such reduction. 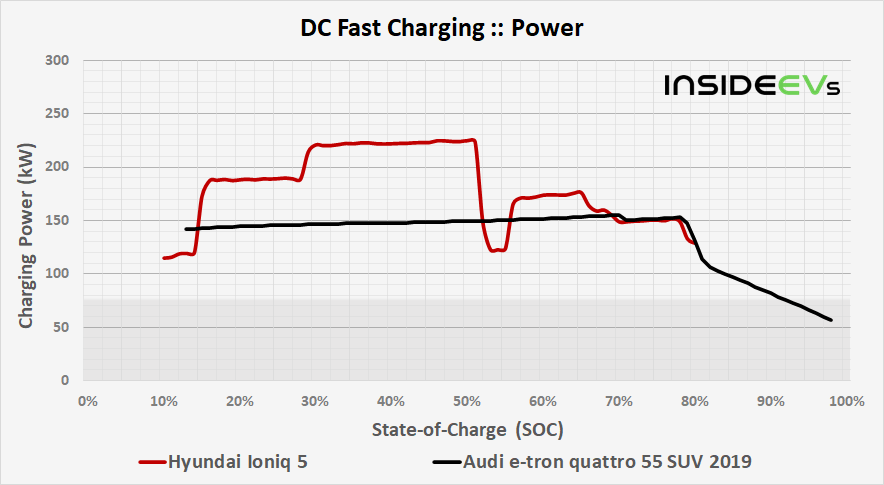 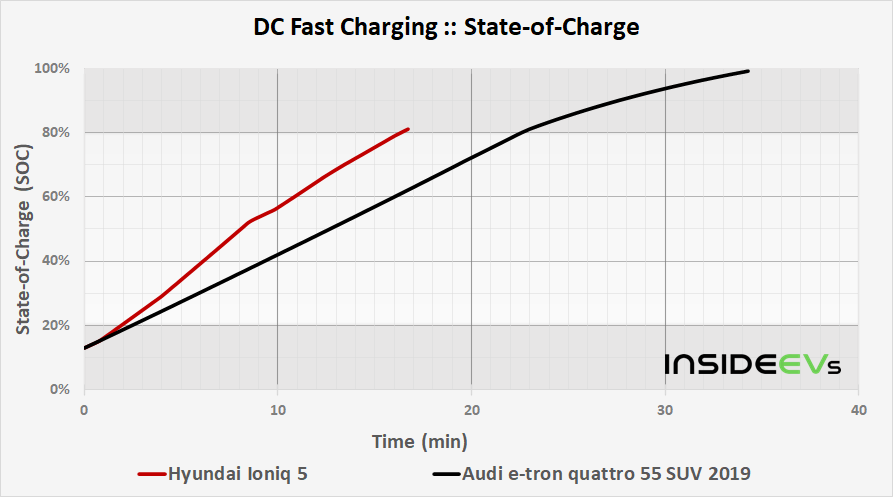 The C-rate comparison reveals how much higher the power load is on the Hyundai Ioniq 5 battery (in relation to its capacity), compared to the Audi e-tron. 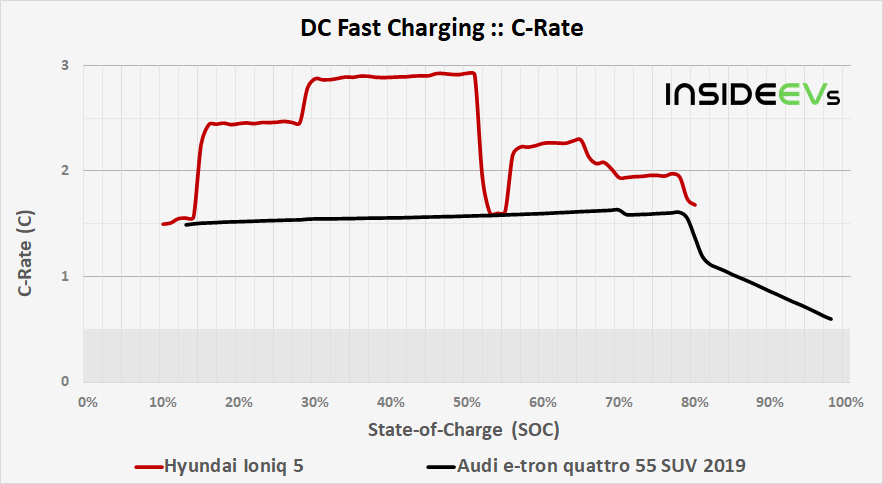 The differences between the Hyundai Ioniq 5 and Audi e-tron culminate in the comparison of the range replenishing speed.

The Hyundai Ioniq 5 charges at higher power and is more efficient, which in effect translates into a much higher rate of replenishing range. The Audi e-tron would not have any chance in the long-range challenge as it would lose a couple minutes at each DC fast charger. 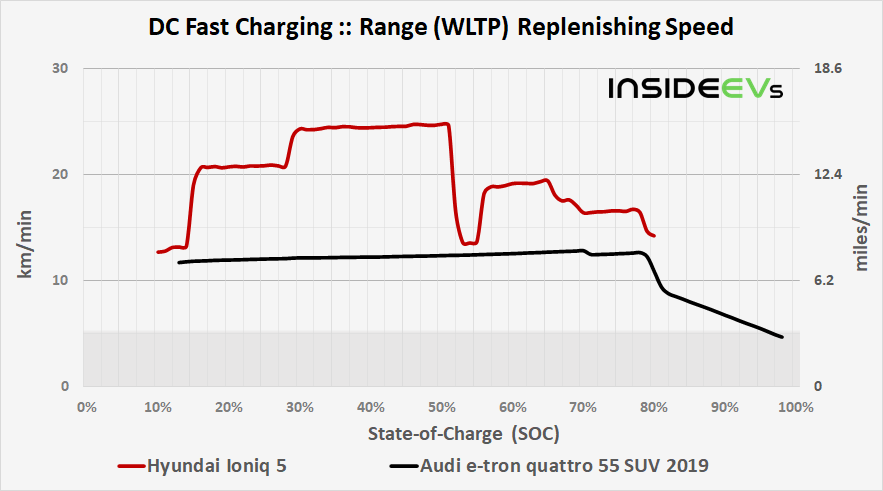 Hyundai Ioniq 5's fast charging capabilities, in the 10-80% SOC range for which we have data, are simply amazing.

Once drivers around the world confirm similar results as presented by the Hyundai Motor Group, we might have a new fast-charging king.

We would like to see what is happening with the charging power above 80% (hopefully there will be at least a decent rate for those who need to fully charge for another stretch).