Did Tesla trade a little bit of charging speed in favor of more range?

The Tesla Model 3 is without a doubt the best-selling electric car (globally) ever. It has great range, performance, and also fast charging characteristics. Today we will take a look at the charging results of the entry-level Standard Range Plus (SR+) version in Europe (made in the USA).

Our primary interest will be the 2021 Tesla Model 3 SR+, tested recently by Bjørn Nyland (see video above), and compare it with the previous "2019-2020" SR+, using data from the Fastned fast-charging network (they appear to be in line with Bjørn Nyland's 2020 Model 3 SR+ test).

As far as we know, both of those SR+ cars are equipped with Panasonic's NCA battery cells (we are not 100% sure), manufactured at the Tesla Gigafactory in Nevada:

In Europe, there is now also a Chinese SR+ Model 3 with an LFP battery (CATL), which might have different charging characteristics. Initially, in China, there was also a SR+ version with NCM batteries from LG Chem's LG Energy Solution. Some reports say that LG batteries are used also in some Teslas produced in the U.S. as well, which means that it will be very difficult to compare Tesla products (on top of that are one going changes through new software updates).

Anyway, the analysis of Bjørn Nyland and Fastned data reveals that the new 2021 Tesla Model 3 SR+ with NCA battery charges slower than the "2019-2020" version. According to some comments, it might be related to the switch to new chemistry (more energy-dense and less costly, with lower cobalt content). Reportedly, a side effect of that is slightly lower charging power.

There are also other possibilities - Tesla maybe limited the initial charging power to make sure everything works as it should - and will unlock a similar/or better charging power at a later point.

First of all, the charging curve of the 2021 Tesla Model 3 SR+ is very smooth (natural for phese articular battery cells), without artificial power caps for certain SOC levels.

Charging from 65 % SOC is below 50 kW, which is not particularly high.

We don't have exact time data for the charging session, but from the video it seems that the charging from 20% to 80% SOC took about 30 minutes.

The average power in the very important range from 20% to 80% SOC is 64 kW (not particularly high to be honest), which is 40% of the peak value.

To minimize the charging time on a long-distance journey, it's worth arriving at a lower SOC level. 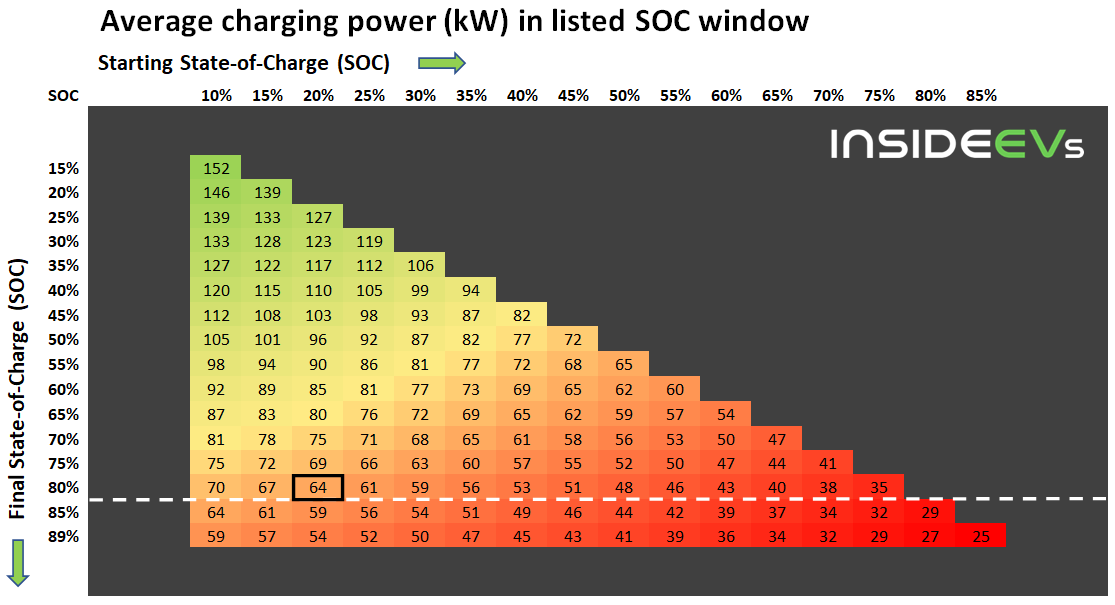 The peak C-rate* - charging power in relation to the total battery capacity of 55 kWh (estimated/guess) - is about 2.9C. That's one of the highest results in the industry.

As we can see below, the range replenishing speed chart is the one in which Tesla shines, thanks to its high efficiency.

The data reveals that the previous version was charging at noticeably higher power across the 10-80% SOC range. The peak appears to be capped at 170 kW in the 2020 version. 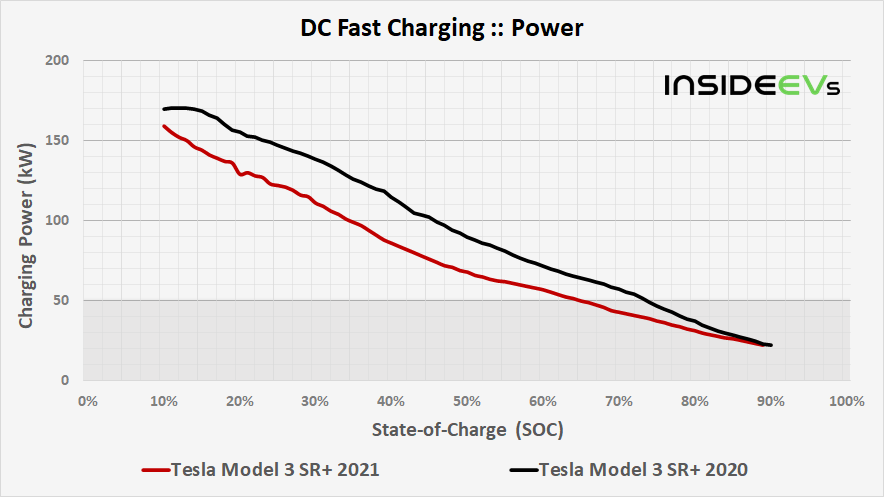 Higher power combined with a few percent smaller battery translates into much faster charging (about 30 minutes vs about 22 minutes). 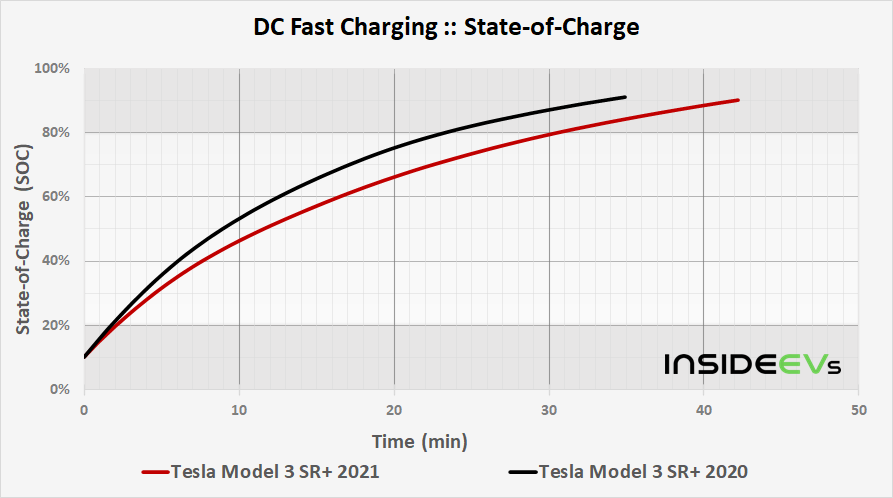 The C-rate of the older Model 3 SR+ is noticeably higher than in the new version. At peak it exceeds 3.0C! 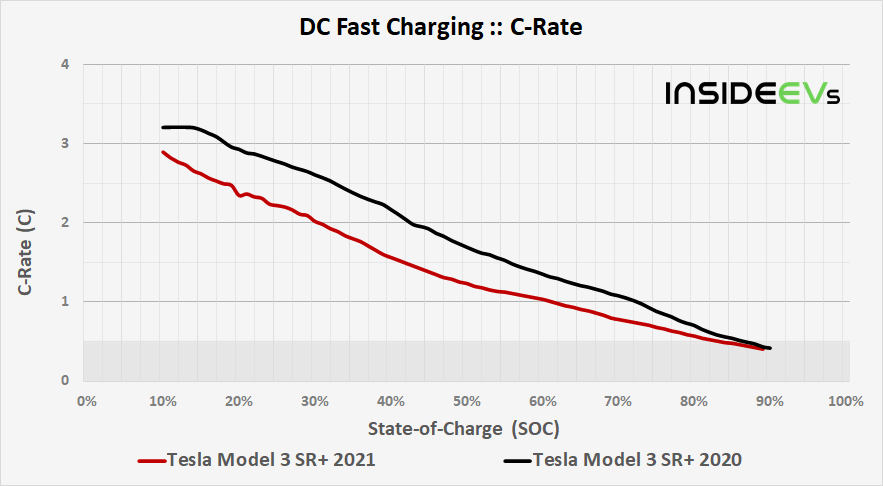 Time for a small summary of all the numbers. The most important thing from the user perspective is that the previous Model 3 SR+ was able to average at 82 kW (20-80% SOC), which is a third faster than the new one: 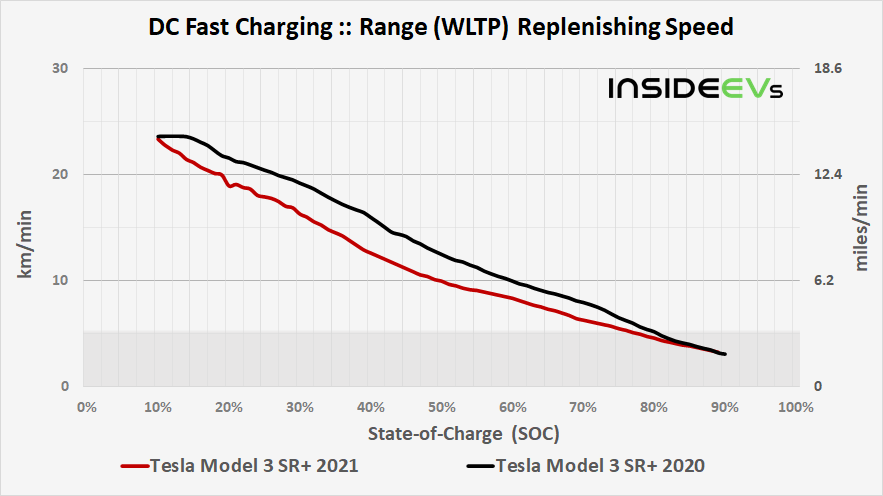 The new Model 3 has 22% lower charging power average (20-80% SOC), while the range is replenished 18% slower. The WLTP range itself is almost 10% higher, so maybe it's an intentional trade-off.

The 2021 Tesla Model 3 SR+ offers very good DC fast charging characteristics, however, it's not as good (at least now) as in the previous SR+. The reason might be a tradeoff between the energy density (for higher range) and the charging power.

In the case of Model 3 SR+, it's worth charging at low SOC levels, as the power is much higher in the beginning.

We are eager to see more tests of the Tesla cars so stay tuned for more reports.