If this is true, then Audi e-tron has a strong contender.

Scanning the Internet for information about the Hyundai Ioniq 5, we came across an interesting demonstrative chart of DC fast charging, posted on a German forum - goingelectric.de. 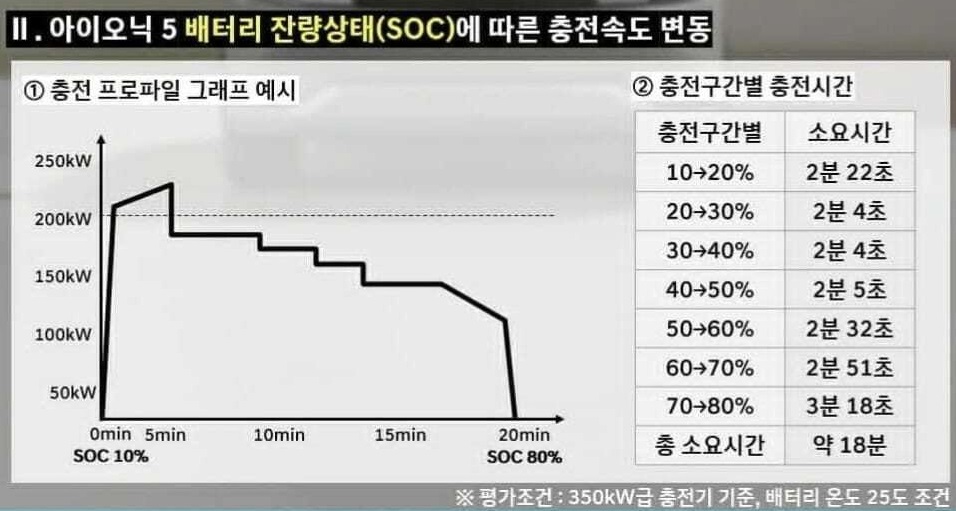 Because the Hyundai Ioniq 5 (and E-GMP-based EVs in general) might be one of the best on the market in terms of fast charging, let's try to analyze this example.

The peak charging power appears to be above 230 kW - probably up to around 235 kW. A really high value.

The power output decreases sharply, but in small steps (at least in the example), and stays above 100 kW up to 80% SOC (end of the session). At this point we don't know how it behaves above 80% SOC.

That is in line with Hyundai Motor Group's info: 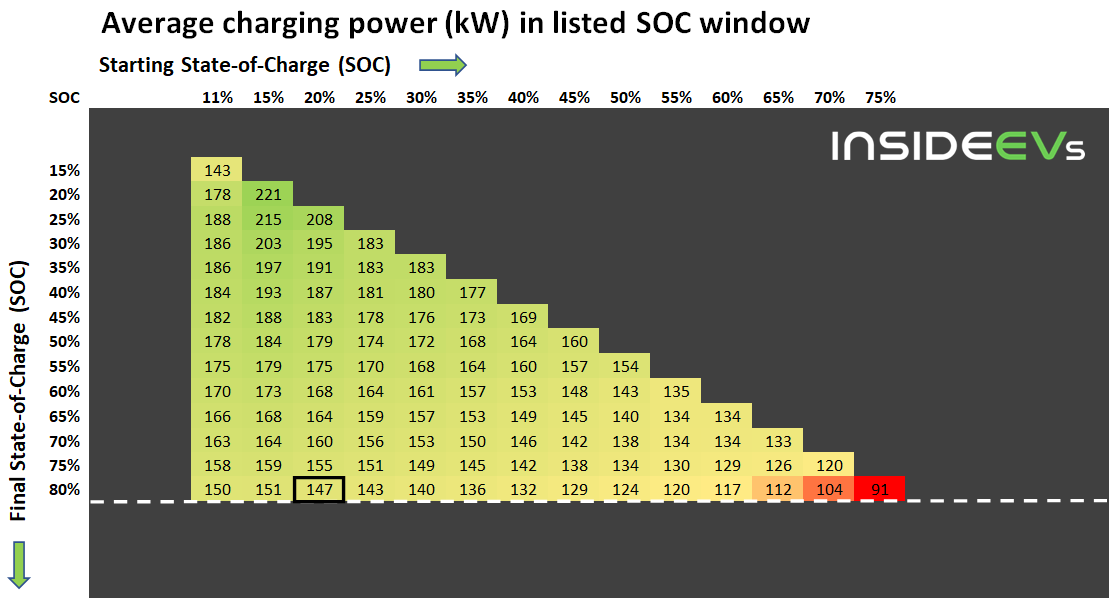 Assuming that this is the 77 kWh battery option (72.6 kWh usable), the peak C-rate* - charging power in relation to the total battery capacity - is about 3.0C! That's pretty amazing.

The average C-rate when charging from 20% to 80% SOC is closer to 1.9C, a value normally seen as a peak (if ever) in most of the other models.

The results are outstanding once again. The Hyundai Ioniq 5 has the potential to average at a level that other models usually reach only at peak.

The maximum value is exceeding 25 km/minute (16 miles/minute), which would be in line with what Hyundai-Kia said: "100 km of range (WLTP) in 4.5 minutes of charge".

Let's compare those preliminary results with one of the world's best models in terms of DC fast charging - the Audi e-tron quattro 55 (2019 version). At a later point we will probably try to compare it with Tesla, which are also state-of-the-art in terms of charging.

As we can see, for the available SOC range, the Hyundai Ioniq 5 has significantly higher peak power and is above the e-tron for more than half of its SOC, despite the battery pack being 10% smaller (77 vs 95 kWh).

We can't say anything about the area above 80%. 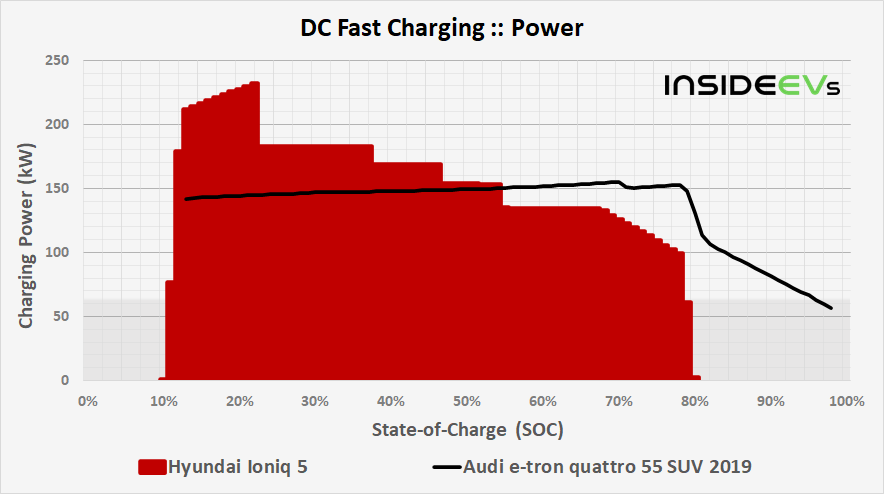 Here is the secret of the Hyundai Ioniq 5 - its battery pack is pushed hard up to around 3.0C, compared to a rather constant load of 1.5C in the case of e-tron. 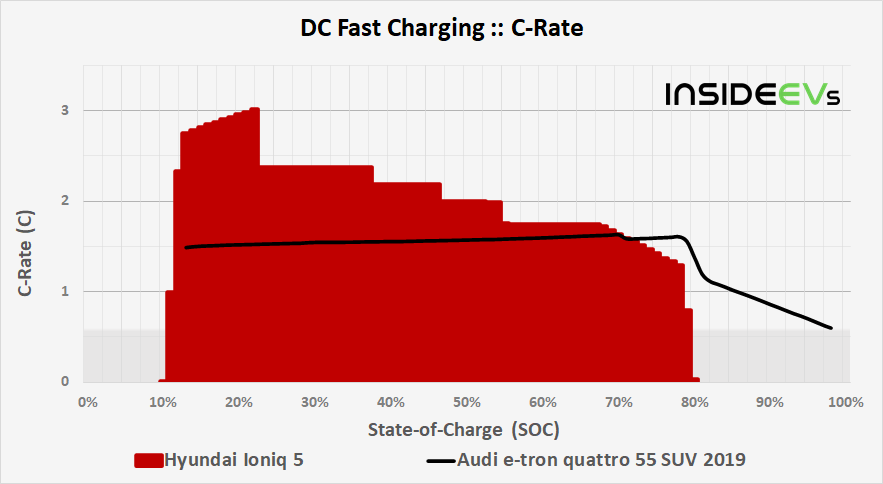 Finally, the rate of replenishing range. This is where Hyundai Ioniq 5 destroys the Audi e-tron. It not only charges at high power, but is also very efficient. As a result, the range is replenished 30% faster (between 20 and 80% SOC).

On top of that, it has slightly more WLTP range than the e-tron (about 10% or so), which overall translates to a noticeable difference. 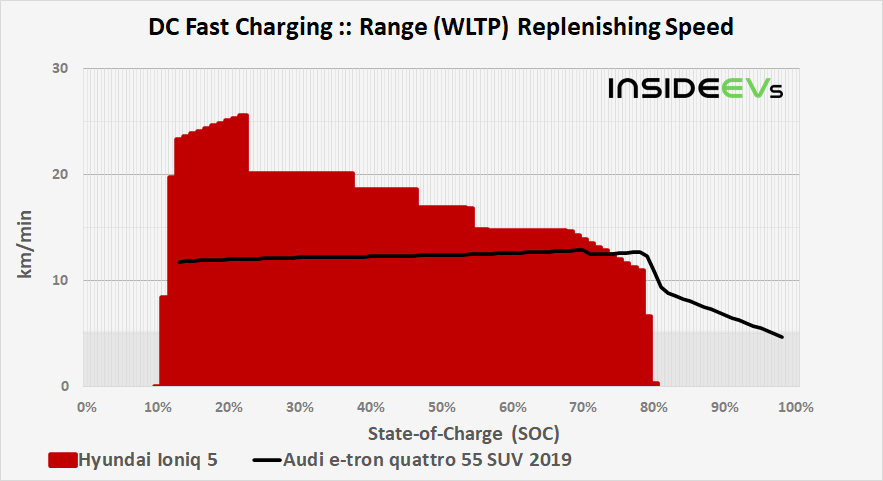 The example of DC fast charging session of the Hyundai Ioniq 5 indicates that this will be another level of charging speed - 2C and 15+ km/min on average (20-80% SOC) and 3C/25+ km/min at peak.

Now we eagerly wait for some real world results or data from a reliable source, that would confirm or debunk this example.