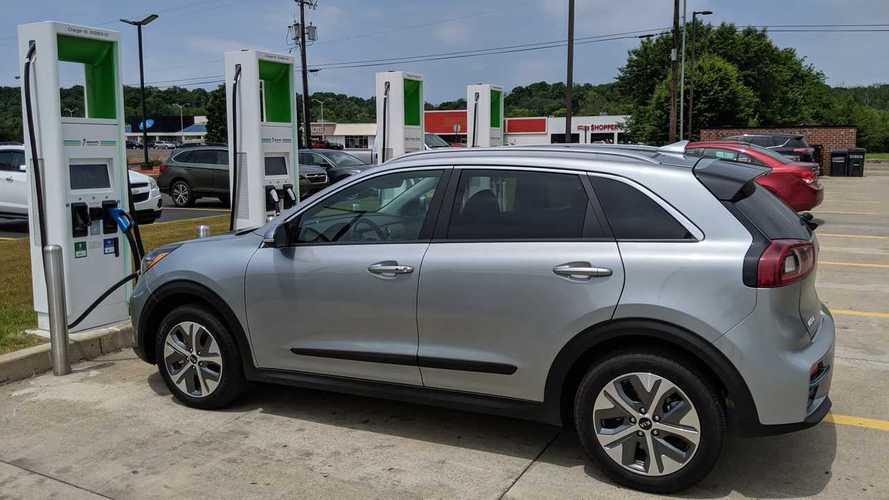 Just how fast can the Kia Niro EV charge?

There's a lot to like about the 2019 Kia Niro EV. I'm four days into my 8-day press loan and I'm finding it really hard to come up with a lot of things I can criticize Kia for with this car. However, one of the things I definitely don't like is how they describe the Niro EV's DC fast charge capabilities.

That's led to some confusion, and many journalists believed (and reported) that the Niro EV was capable of charging at 100kW. The reason for the confusion is that Kia released press materials that list the Niro EV's charging time to 80% as "1 hour @ 100 kW EVSE". That's technically correct, but introducing the "100 kW" definitely caused many in the industry to believe the Niro EV could charge at 100 kW.

The fact is, the Niro EV is only capable of reaching about 77 kW on a DC fast charge station, and even then it cannot maintain that rate for long. Others have already tested and proven this, including Fastned, a DC fast charge network in the Netherlands, Germany and the UK. Fastned even produced a nice graph to demonstrate the DC fast charging profile of the Niro EV. That information is very important, because how an EV ramps up and down its power, is just as important as its peak draw.

So off I went to test out the Niro EV's DC fast charging capabilities for myself. The nearest high-speed (100+ kW) DC fast charge station is located Bloomsburg, PA, 112 miles from my home in Northern New Jersey. I wanted to pull up to the station with less than 10% SOC, so I could see for myself how long the Niro EV would take to arrive at 80%. Therefore, I only charged to 45% before heading out to the Electrify America site at a Sheetz gas station & food store.

I arrived at the Bloomsburg, PA, Electrify America site with 9% battery left.

I had thought about cutting it closer, but was worried about the possibility of the Electrify America stations not working, (that's something that every EV owner worries about, except Tesla owners because Tesla Superchargers are nearly always operational), so I wanted to leave myself 20 miles of range to make it to nearby level 2 stations that I located on PlugShare, in case of emergency. The plan worked out perfectly, and I arrived with 9% SOC.

However, after trying all four Electrify America stations, and failing to get any of them to initiate a charge, I started to be a little concerned. I really didn't want to spend 6 hours in Bloomsburg, PA, while slow-charging the Niro EV on the nearby ChargePoint L2 public charger.

I tried unsuccessfully to get any of the 4 stations to initiate a charging session, so I ultimately had to call customer service.

So, I called the Electrify America customer service number on the stations, and, after trying a couple of things, we got the station activated and I was "filling up". I'm not 100% sure what the issues were with the stations, because there were multiple recent reports on PlugShare that the stations worked fine for other EV drivers. Also, the customer service representative told me she could see on her end that these stations were being used as recently as the day before without issue.

One thing is I was trying to use an AMEX card, which the stations should be able to accept. The customer service rep told me that they do experience issues with AMEX accounts sometimes, and advised me to try a Visa card, and that eventually worked. So, it could have just been a credit card thing. In any event, it really wasn't a great experience, and something Electrify America needs to work on. When you arrive at a public charging station, you really just want to plug in and walk away without even thinking about it. Unlike Tesla, the rest of the industry is just not there yet.

The Niro EV climbed up to 77 kW, but once it reached 35% SOC, the charge rate dropped off dramatically, holding at 39 kW until the station faulted and shut off, when the car reached 47%.

Within a couple of minutes of plugging in, I could see the Niro EV was indeed topping out at 77 kW. The station I was at was marked as a 150 kW station, and the three other stations there were all marked 350 kW. Still, the station can deliver way more power than the Niro EV can accept, so the station wasn't a limiting factor here, it was the vehicle.

What did surprise me though, was that once the state of charge reached about 35%, the car began to rapidly ramp down the charge rate and leveled off at 39 kW. That doesn't match the charging profile demonstrated by the Fastned graph above. During this time, I could hear the Niro's fans blowing on high speed. Perhaps my 2.5 hour drive at 70-75 mph had warmed the batteries up too much, and the car needed to lower the charge rate because the cells were getting too hot? It was only about 70F (21C) degrees out, which isn't very warm, but the 112-mile drive at high-speeds surely heated up the pack a bit.

After charging for 27 minutes, the station shut down and I had to initiate a new session to continue charging.

Then, at 47% SOC, the charging session abruptly ended. I was inside the Sheetz and received a text message from Electrify America that my charging session has ended and I have 10 minutes to move my vehicle before I begin to incur the $.40/ minute idle fee, designed to keep people from blocking the stations once they've finished charging - which I support 100%.

I returned to the vehicle, and initiated another charging session, this time without issue. I watched as the charge rate climbed up to a peak of 78 kW, and then drop down to 60 kW and hold that until the SOC was 72%. From 72% on the charge rate continued to drop, and by the time the SOC reached 80%, the charge rate was 25 kW and I unplugged.

Electrify America recently announced that they will be lowering their prices about 20%, and instituting a new per-minute fee based on the power the EV can accept. Forty-cents per kWh is much higher than what most Americans pay for their electricity, but we need to understand tha using a DC fast charge station is a convenience, and we have to pay for that. These DC fast charge locations with four to eight high-speed stations cost hundreds of thousands of dollars to build out, and then the operators have exuberant demand charges to deal with, so we have to expect to pay a lot more than we pay at home to use them.

Getting back to the Niro EV, I averaged 58 kW over the 54 minutes it took me to go from 9% to 80% state of charge. Personally, I'm disappointed in that. Since the Niro EV has a large 64 kWh battery and great range, it's a pretty good EV to use for road trips. If it could actually charge at 100kW, and maintain that rate until it was ~75% charged, you'd only need about 30 minutes to get to 80% charged, almost half the time the Niro EV currently takes. While it may not be a deal-breaker for most interested in the Niro EV, it's definitely not one of the vehicle's strengths, in my book.

As for Electrify America, I maintain my high hopes that they will develop into a national network of reliable high-speed DC fast charge stations. Sure, my first experience wasn't exactly what I had hoped for, but after calling customer service, who were very pleasant to deal with, I was able to charge up and get home without too much inconvenience.

As for now, Tesla still has the best EV fast charge experience, by far, and still has the fastest charging EVs available. All of the automakers and charging networks are still just trying to catch up. To Tesla's credit, they keep moving the ball forward, making sure they stay in the lead.