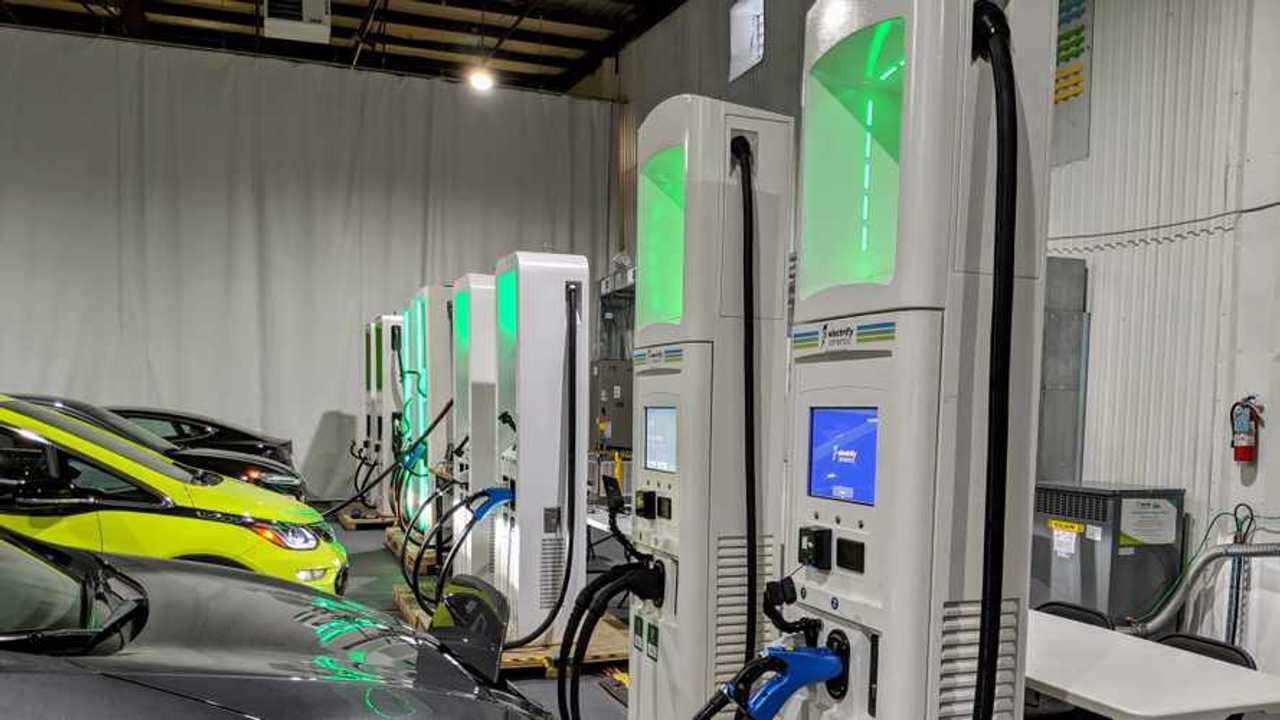 It's been exactly a year since Electrify America turned on the power at their first DC Fast charger site on May 2nd, 2018. Since then, the EV charging network born out of the Volkswagen diesel scandal has been quite busy. In addition to the rollout of their network of high-speed DC fast charge stations, Electrify America had some more news to announce, so they invited select media outlets to their headquarters in Reston, VA for a technology workshop.

Electrify America president & CEO Giovanni Palazzo spoke first and proudly announced that they have just commissioned their 161st site, (He had actually said 159, but was corrected because there were two more sites just commissioned that morning) with an average of 4 to 5 stations at each site.

"We are talking about an unprecedented pace, in terms of EV infrastructure in the whole EV industry"- Giovanni Palazzo, CEO, Electrify America

Palazzo stressed how a year ago they had just opened their first site, and the pace that they are opening up new sites is unmatched in the industry. He did qualify that by saying it's difficult to really know exactly what's happening in China, but Chinese DC fast charge infrastructure doesn't come close to matching the power level of his 350 kW stations.

When Palazzo was asked if they were beating Tesla's Supercharger installation pace, he said they like what Tesla's doing, they like the company and they want to cooperate with Tesla, so he's not going to compare their progress with Tesla's. That said, he stands by his statement that nobody is, or has installed high-speed EV charging infrastructure at a faster pace than Electrify America.

Brendan Jones, Electrify America's COO was a little more willing to make the Tesla comparison than Palazzo when he later said: "This is a breathtaking pace. This is the fastest deployment of EV fast charging infrastructure in the history of the United States. So, what it means today, is we have 711 fully-functional DC fast chargers in the market, deployed in a one-year timeframe. That beats everyone including Tesla in speed & access". Jones went on to say that as fast as the pace has been, they are about to accelerate the installations, and open up stations at an even faster pace than they did in the past 12 months.

Palazzo also said they are targeting to have 484 sites open by the end of 2019. Those sites will include 2,000+ high-speed DC fast charge stations, and 2,800 level 2 chargers. The sites are an average of 70 miles apart, and have a maximum distance between sites of 120 miles.

The CEO also reaffirmed that Electrify America will indeed begin to employ Plug&Charge technology before the end of this year. Plug&Charge uses the global standard ISO 15118 which identifies the vehicle when it's plugged in, eliminating the need to use an RFID card or credit card to activate a charging session. Palazzo said that a multitude of auto manufacturers were already working on getting their EVs ready to utilize Plug&Charge technology.

Electrify America will soon launch a mobile app that will allow users to locate chargers, pay for the charge, track their charging sessions (real time and past) and receive notifications. Also, if you become an "Electrify America Pass" member, you will be able to see the state of charge of the EVs charging in your area, so you'll know if they are almost finished charging. You can also have the app notify you when a station that was in use becomes available.

In addition to the new lower per-minute rate and the membership plans, Electrify America will be charging based on the car's maximum charge rate. There are three different levels that will determine what the customer pays by the minute: 0-75 kW; 76-125 kW & 126-350 kW. The exact pricing for these three levels hasn't been formally announced yet, but this does seem to be a reasonable way to establish the pricing structure.

I was able to get a couple pictures of one of Electrify America's charging stations in their technology lab that displayed the three levels of pricing. 0-75 kW cost $.25/minute, 76-125 kW cost $.69/minute and 126-350 kW cost $.99/minute. Whether or not this is what the actual pricing will be couldn't be confirmed. However, it seemed to be close to what I would expect, so I think it may actually be what they charge in certain areas.

*Disclaimer: Electrify America provided transportation and meals for InsideEVs to attend the Charge Forward workshop and report on Electrify America's progress. No other compensation was made.

Reston, VA (May 6, 2019) – Electrify America today announced the launch of a mobile app, available for both Android and iPhone. The company’s first-ever app allows users to manage the entire charging session on their phone, increasing convenience for electric vehicle (EV) owners.
The company also is introducing two charging membership plans called Electrify America Pass and
Electrify America Pass+. In addition, Electrify America will be changing its introductory charging cost pricing, currently at 30 to 35 cents per-minute, and will implement a roughly 20 percent reduction on those prices, depending on regions and local utility rates.

“We are committed to increasing EV adoption and are constantly innovating to make the charging
experience as convenient and accessible as possible,” said Giovanni Palazzo, president and CEO at
Electrify America. “With our new app, we put all the information and capabilities you need to charge your EV right in your pocket, making charging with us easier than ever. Combined with our new membership plans, we are streamlining the charging experience at our ultra-fast chargers.”

Mobile App: Thanks to easy-to-navigate features, the Electrify America app offers a seamless charging experience:
• Locate a Charger: Find a charging station near you and get directions. The Locate a Charger
feature shows you the charging stations in your area, how many of each type of charger are at
the station, and which ones are currently available. Become a member of Electrify America Pass
and you can see the charging status of vehicles currently using the chargers and get notified
when a charger becomes available.
• Pay for a charge: Upload your payment information into the app and pay for your charging
session through your phone. You can also see prices before you charge, by selecting a station
where you’d like to view the charging costs.
• Track your charging session: While your vehicle is charging, you can check its progress in real
time. If your vehicle communicates charging information, the app will show you your battery’s
current state of charge (SOC) and the time until your battery reaches “bulk” charge, typically
around 80 percent SOC. You also can choose to get notifications when your charging session has
started, slowed and stopped. Once your session is complete, the app will provide a receipt.

Complete pricing information is available www.ElectrifyAmerica.com/pricing and will be updated in late May when the new pricing structure is in place. The mobile app and membership will be released later in May.

Since installing its first ultra-fast DC fast charging station in Chicopee, MA, on May 2, 2018, Electrify America has accelerated the pace of installations nationwide. The company plans to install, or have under development 484 charging stations with more than 2,000 DC fast chargers by the end of 2019. The stations are located in 17 metropolitan areas, and along high-traffic corridors in 42 states and the District of Columbia.

About Electrify America
Electrify America LLC, a wholly-owned subsidiary of Volkswagen Group of America headquartered in Reston, VA, and with an office in Pasadena, CA, is investing $2 billion over 10 years in Zero Emission Vehicle (ZEV) infrastructure, education and access. The investment will enable millions of Americans to discover the benefits of electric driving and support the build-out of a nationwide network of workplace, community and highway chargers that are convenient and reliable. For more information, visit www.electrifyamerica.com.