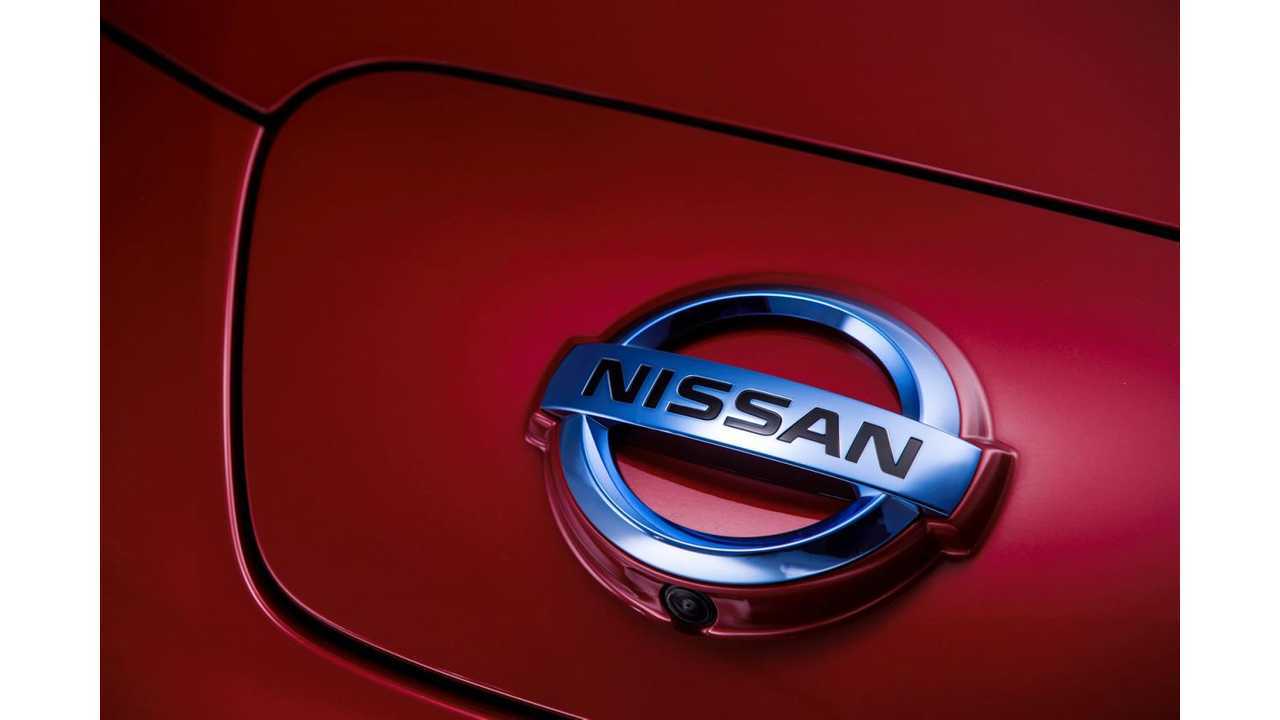 Today started with cool 50F degree (10C) temperatures with light rain and the forecast wasn't promising for much of an improvement anytime soon. We had tentatively planned to get together yesterday, but technical difficulties with a Blink charging station threw a wrench in the plans. This morning, the technicians from Ecotality pronounced that Blink operational, and I got the troops ready for a 12 noon meeting at my house. 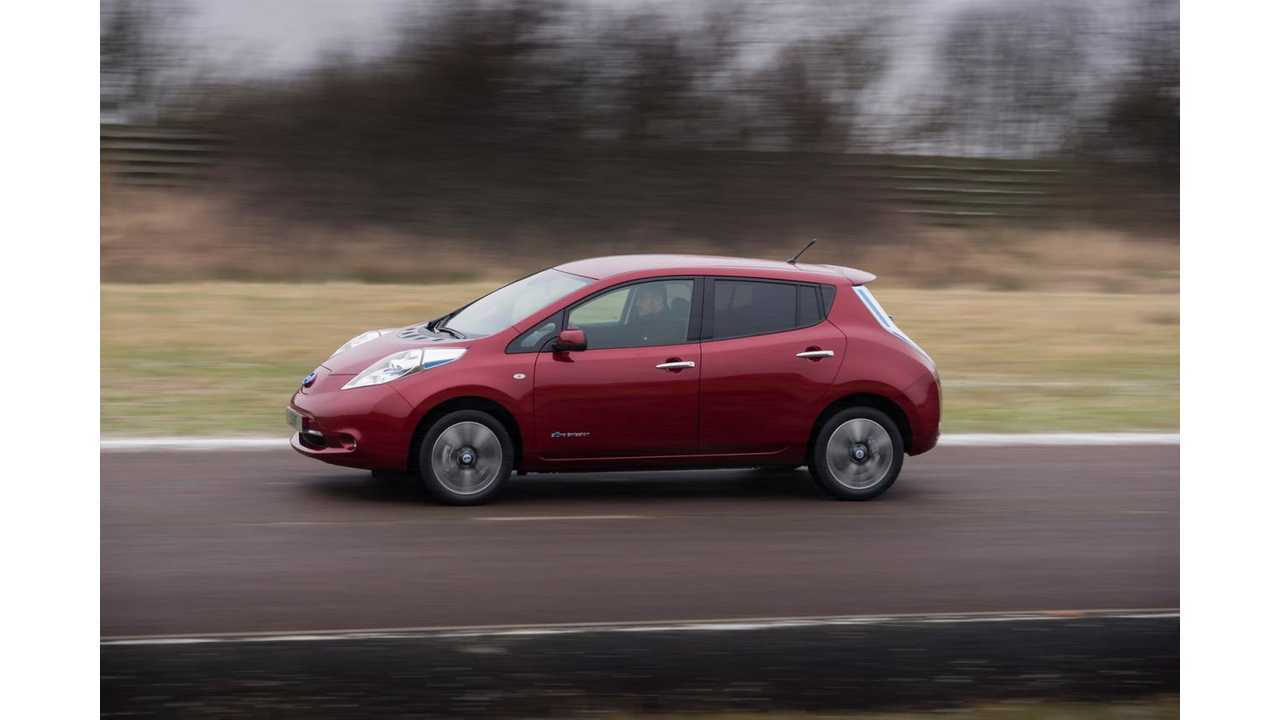 We did the range test today that I would have liked to have done on Feb 22, 2013; we tested the 2012 LEAF-SL side by side with the 2013 LEAF-SL on exactly the same course, at the same time, in precisely the same conditions (1). The course (2) was similar to the previous San Diego test, however I did shorten it by 5.8 miles by truncating the southern portion of the course at the Interstate 8 freeway instead of continuing south to the California 94 freeway. I did this because the previous test with a 2013 LEAF-S only scored a calculated range of 81 miles on an 85.8 miles course. Also, because the ambient temperatures were somewhat lower than the previous test and rain was forecast, I didn't expect us to go further than 81 miles with today's test.

First, a clarification of what these tests are not. They are not an assessment of a typical drive in a LEAF, unless you drive at one speed without any heat or air conditioning. Yes, there are many "hard core" LEAF and other electric vehicle drivers not running the heater in REALLY cold weather in an effort to extend range, or driving significantly slower than the normal flow of traffic, or rolling down hills. While those types of operations may seem perfectly normal to them, the "average" consumer of any car, whether fossil fuel burning, hybrid, or electric will want to drive at normal speeds, use the heater, and will likely spend at least some time in stop and go driving. 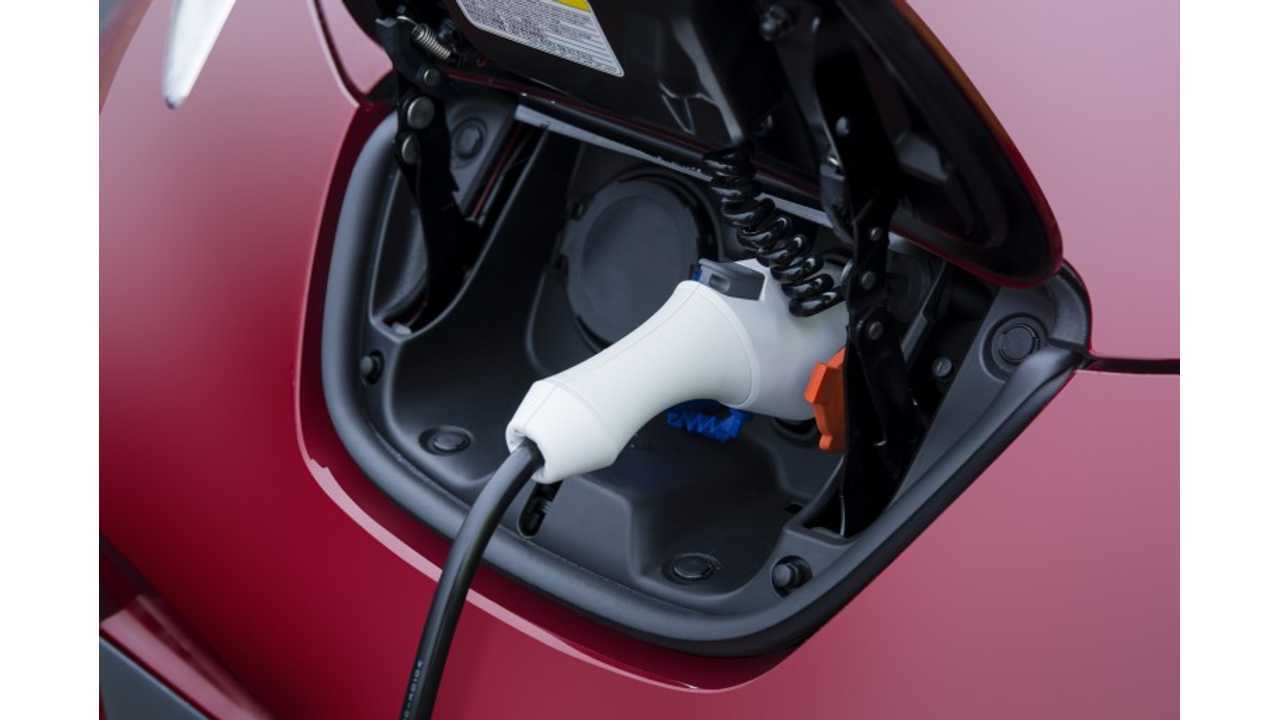 The current 2013 LEAF should offer a decrease in the amount of range loss associated with heater use over the 2012 LEAF (assuming 2013 model is equipped with the optional heat pump). This is an easy test to accomplish that I don't have the weather conditions in San Diego to adequately test. Any LEAF with a resistance heater can be placed in the same cold weather conditions as a heat pump equipped LEAF. Charge both cars up to 100% (or the same capacity if lower than 100%) and run the heater for a few hours while the cars are stationary. Then observe how much battery energy each car consumed at the same ambient temperatures and same Auto climate control setting.

Also, I'll add a note about government range data for the LEAF. Depending where in the world you buy your LEAF, your country's government will publish a distance that the car will go with their respective testing. In Japan, the previous two years of LEAF were published with a 124 miles (200km) range. Then, Nissan dropped some hints in the Japanese press that the 2013 car might go 155 miles (250km), which ultimately became 142 miles (228km) of official Japanese government range. For the USA market, the LEAF could exceed 100 miles (161km) when Nissan tested the car to the EPA "LA5" test cycle. 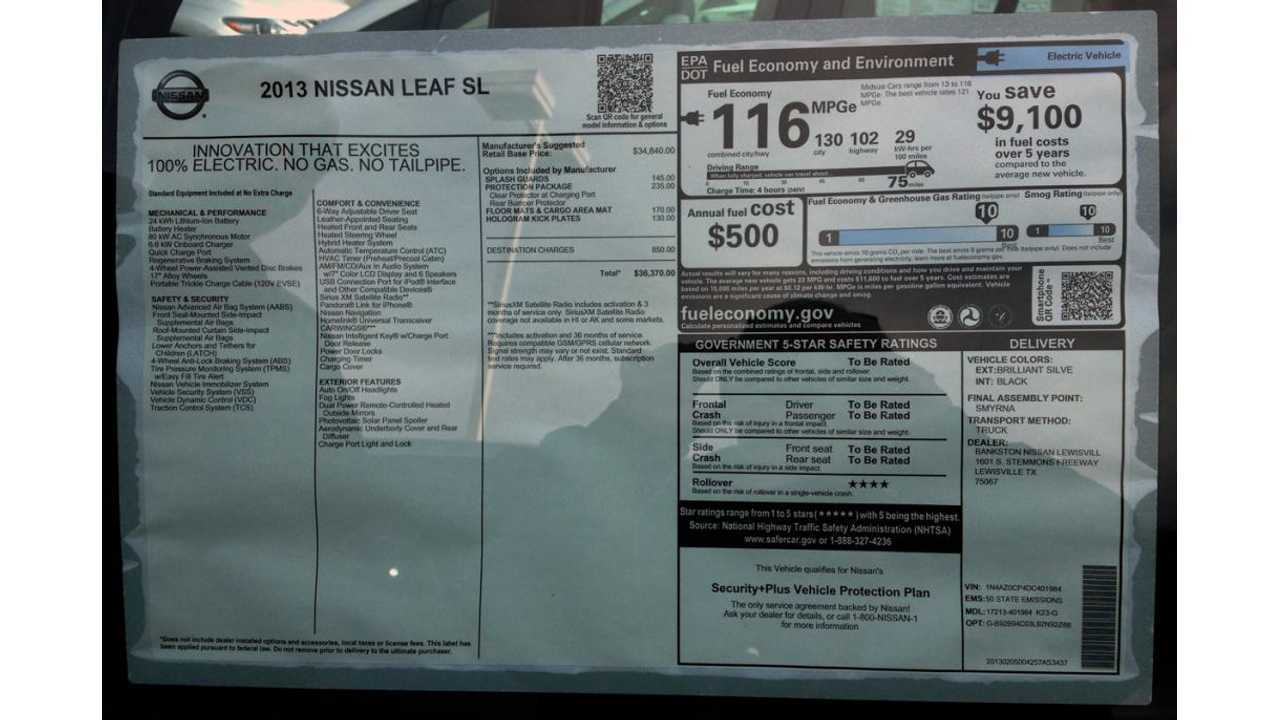 The only problem is that the EPA used a different protocol for those first two years of LEAF and awarded a 73 mile range for those 2011-2012 cars. Then, in 2013, EPA changed to a completely new 5 cycle test that offered an 84 mile EPA range, but further complicated it by then offering a 67 mile "80% charge" range, and averaged the two numbers (84 and 67) to finally arrive at a 75 mile (pending final certification) EPA range for 2013. The LEAF is currently one of only two cars that use this average technique (the 2012 Toyota Rav4 EV is the other) which further complicates comparisons with other EVs. In Europe, the LEAF has a 109 mile (175km) range. My point with offering all these wildly varying numbers is that every LEAF (when new) will get substantially the same 84 miles (135km) of range at 62mph (100kmh) ground speed over level ground with the climate control off in 70F (20C) degree temperatures.

So, is there some way to compare any improvements to the 2013 LEAF to previous LEAFs in average day to day driving? Sure. I recommend something just like the current USA EPA 5 cycle test to cars to be compared, with added components of a climate control test, a degraded battery test and a cold battery test (all of which are so important to EV's). But, that's not this test. 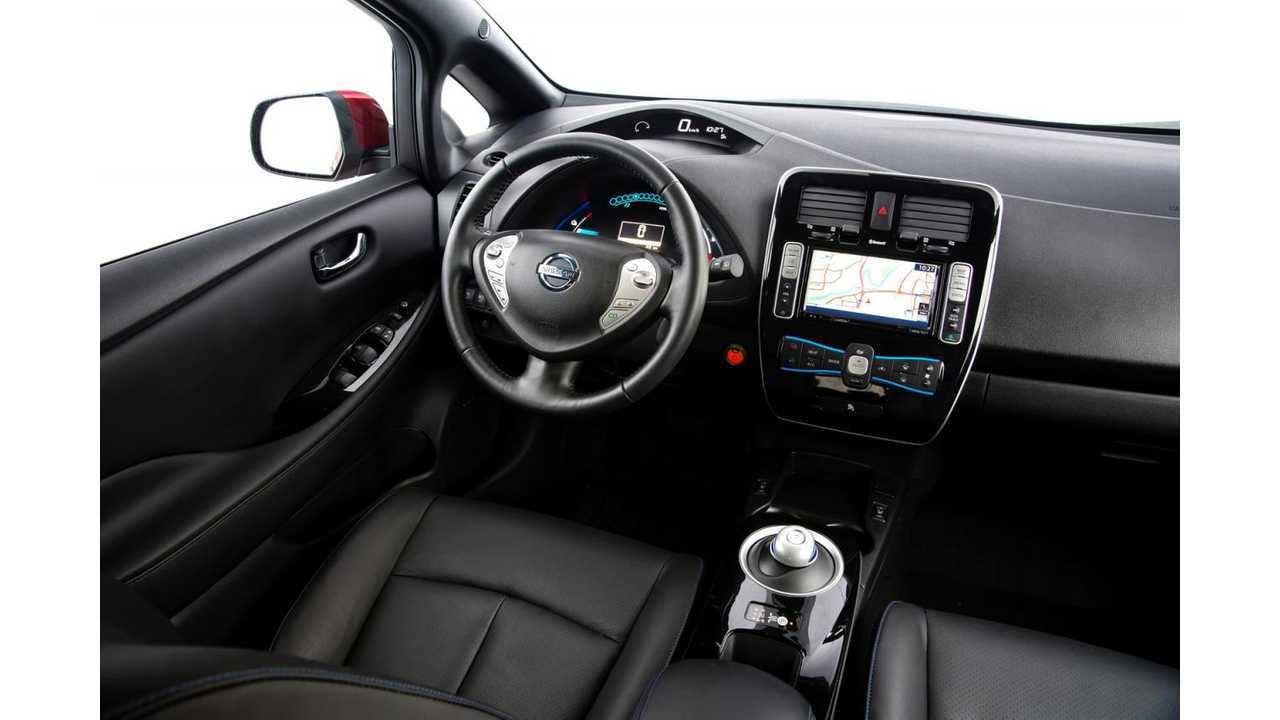 Let me also add a note about the dash displayed "Distance To Empty" (DTE), or predicted range display (more commonly referred to as the "Guess Oh Meter", or GOM). This seems to be one of the hardest things for new owners of a LEAF to overcome. You'll note that I didn't even include that information in this test and the reason is simple; whatever that number was, whether 50 or 150 miles or anything in between, it would not have changed the outcome at all.

As with every constant speed range test I've conducted, speed was maintained as close to 100kmh (62mph) ground speed as possible, and checked with the GPS. In the 2013 car, this resulted in a speed between 63mph and 64mph indicated (102.4% of actual speed) on the speedometer. This is a significant increase in accuracy over the previously tested 2013 car which showed 65mph indicated (104.8% of actual speed). My best guess as to why today's speedometer was significantly more accurate was the 2013 LEAF-SL's larger 17 inch Michelin tires.

The other parameters of the test that were consistent with the previous Feb 22 test: 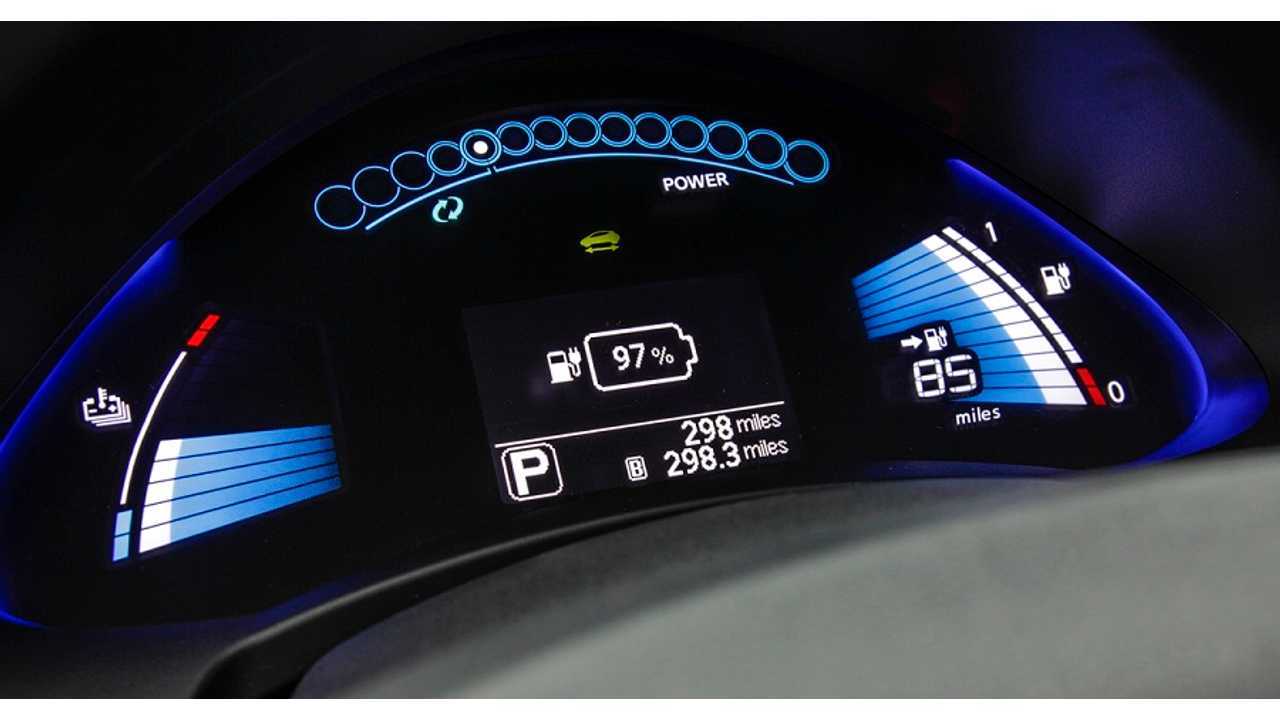 We were running slightly behind schedule, but after getting both cars completely charged up, we got underway at 12:45pm. The newer car showed a perfect 281 Gids (100% capacity) on our portable meter, however the dashboard State Of Charge (SOC) showed 98%. I have no idea why it didn't show 100%. Of course, the 2012 car doesn't have an SOC% dash meter and since the car's July 2012 manufacture date was 8 months ago, some degradation of the battery is to be expected. We got several measurements between 268 and 270 Gid, so I'll just average that to 269 (95.7% capacity). We will have to make a correction to the final data to account for the missing 4.3% of the capacity.

I rode right seat in the 2013 car while owner John performed the driving art with his shiny new metallic slate color car. Phillip joined Lynn in the right seat of Lynn's car, and the trip began. We had some light rain for the first third of the course. I did my best to correlate the odometer range with the Google maps calculated range at each check point along the course. The 2013 was consistently showing 2% under the Google data, which was also consistent with the error between the speedometer's indicated speed to actual GPS ground speed. The cars showed 5 temperature bars on the battery temperature gauge, and the dash ambient temperature gauge showed 52F (11C) to 54F (13C) during the drive. The second third of the course was dry.

We were not able to maintain a steady 100kmh on the course today, mostly due to Friday afternoon traffic. In addition to the exits and ramps between the freeways, there were two separate traffic slow downs on the freeway. The first was northbound on the Interstate 5 freeway about 5 to 10 miles south of Oceanside, and the second was 1 to 5 miles east of Escondido on the California 78 freeway eastbound. Of course, both cars experienced the same traffic at the same time.

The final results are as follows: 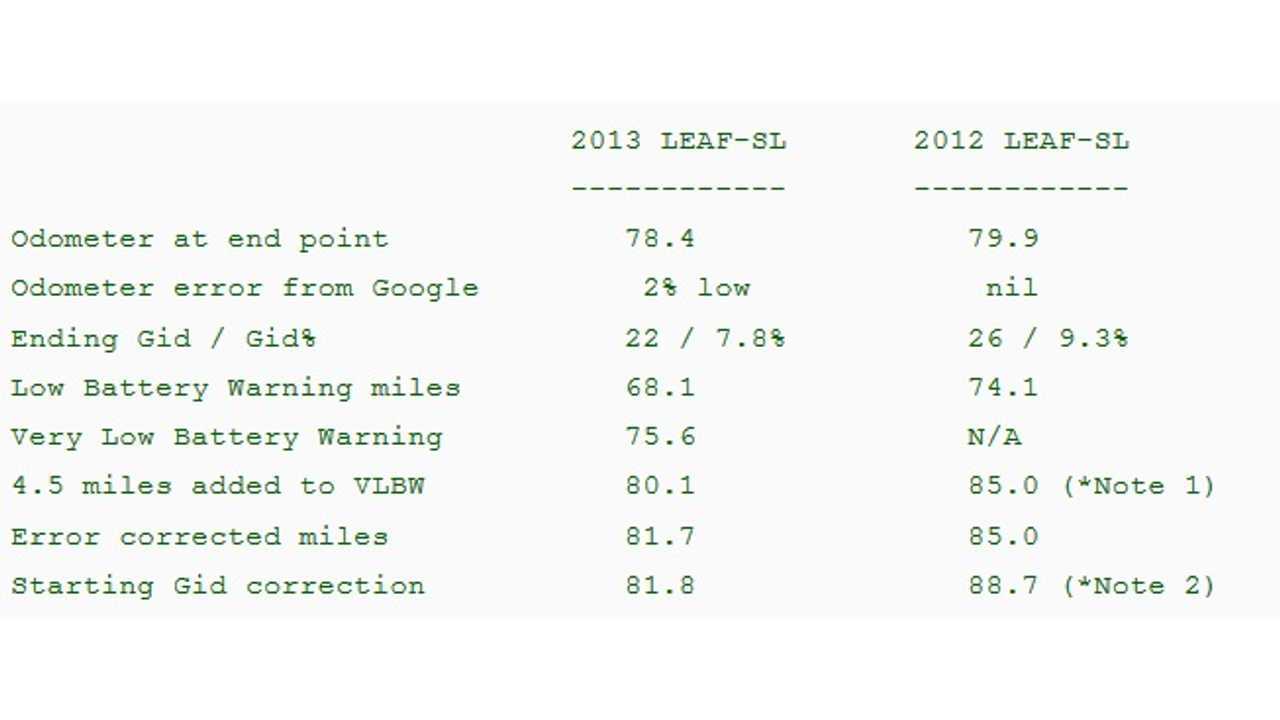 Conclusion: Two separate 2013 LEAF's have failed to exceed the range of either 2012 LEAF tested, and may actually have less range in these parameters.

I'd like to thank John for allowing us to punish his 2013 LEAF with only a few days of ownership and about 200 miles on the odometer (and new to EVs). Also, a big thank you to Lynn for slugging through the rain to volunteer one of the newest 2012 and lowest mileage LEAFs on the road (they also have a 2011 LEAF). Finally, a big shout out to Phillip for once again loaning us his Gidmeter, and riding shotgun in the 2012 to take notes and keep us honest. He owns both a 2011 LEAF and a new 2012 Rav4 EV. He had planned to also participate with his 2011 LEAF, and even went as far as swapping the wheels back to the originals, but a failed Blink DC charger (different than the one that foiled us yesterday) eliminated his chance to get his car charged up in time.

Weather today between 12:53pm and 2:53pm at nearby Palomar Airport (KCRQ) in north San Diego county:

Postscript:  Tony previously headed up the largest independent test of LEAFs with battery capacity loss that (in-part) prompted Nissan to take corrective action for LEAFs that were  struggling in the extreme hot weather places in the US, like Phoenix.  Our thanks to Tony for this comprehensive 2013 LEAF range road test.

By: Tony Williams
++
Got a tip for us? Email: tips@insideevs.com