It appears to be an NCM 811 chemistry with very good energy density and total energy estimated at 96-99 Wh.

In the second part of the Tesla 4680-type cylindrical battery cell teardown and analysis, The Limiting Factor presents the initial specs and findings.

While the teardown video was very interesting, the second part, with new details, is even more interesting, as it confirms some of the rumors and includes surprises.

According to the video, Tesla's in-house produced 4680-type battery cell (acquired about six months ago) is equipped with a NCM 811 cathode chemistry. The material characterization indicates 81.6% nickel content.

The amount of cobalt and manganese has not been revealed, but it appears that there is no aluminum (so no NCA or NCMA type).

The Limiting Factor notes that the new dry battery electrode technology has not been used on the cathode, but it was on the anode. It was expected that it will be applied in both cases or none.

The analysis of the anode revealed that there is no silicon. The anode active material is graphite. That's another surprise, as usually 10-15% of silicon is added in the state-of-the-art lithium-ion battery anodes to boost capacity/energy density.

At this point, we can think that the analyzed cell might be a basic/early version in terms of chemistry and Tesla's new dry battery electrode technology.

The energy density of the cell is estimated then at 272-296 Wh/kg, which is very good and basically comparable to the best cells on the market.

Considering the rumored total energy content, the energy density would be:

In April, it was also pointed out that there might be two battery pack configurations with the 4680-type cells:

The pack total energy is interestingly close to the reported usable battery capacity of over 67 kWh in a Made-in-Texas (MIT) Tesla Model Y.

Let's also recall that the new MIT Tesla Model Y with 4680-type battery has not been listed as Long Range in EPA's documents, but simply as Tesla Model Y AWD and it has 15% less range than the version with 2170-type cells (279 miles vs. 330 miles).

One of the interesting findings is that the new cell has a much thicker steel enclosure (cell can) than the 2170-type cell.

The reason behind that is most likely the necessity to carry forces in a structural battery pack.

It makes the 4680-type cell heavier. According to the video, the weight penalty is estimated at 10-15%.

But as we saw above, despite that, the energy density is comparable:

However, having a structural battery means that Tesla will be able to save weight on the car structure level, making the energy density on the car level noticeably higher. At least, that's what Tesla's CEO Elon Musk outlined during the Battery Day in 2018. 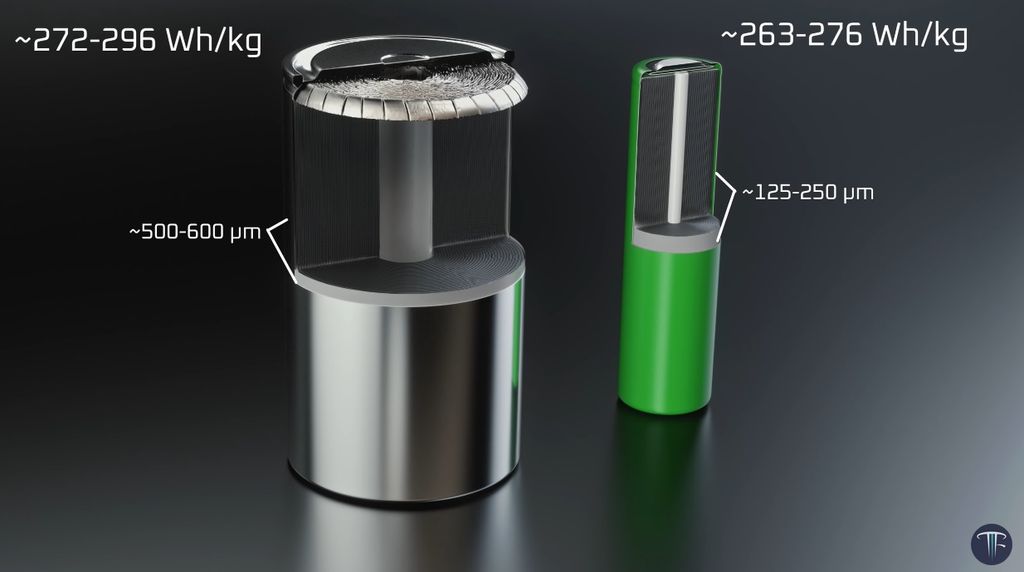 The Limiting Factor says that the new cell might have such competitive energy density (despite the heavy can and no silicon anode) thanks to the thickness of the electrodes (more active material).

The cathode thickness appears to be 20-25% higher in the case of the new cell:

The analyzed cell was acquired about six months ago. In the next step, The Limiting Factor intends to get a newer cell from Munro Live, which is busy with its MIT Tesla Model Y battery teardown.

The cells from Munro's Model Y are expected to be updated compared to the cell analyzed here. At least externally, some changes were noted so there might be changes also inside.

The Limiting Factor promises a deep dive video with even more detailed results and a new series of tests of the Munro's cell.

All in all, the Tesla's 4680-type cylindrical battery cells are a real thing and very promising, with a lot of potential for further upgrades.

Official: Panasonic's New US Battery Plant Will Be Built In Kansas
Northvolt Raised $1.1 Billion To Support Expansion In Europe
By: Mark Kane
++
++
Got a tip for us? Email: tips@insideevs.com