The one take video was shot aboard the Xpeng P5 sedan that uses Lidar as an integral part of its ADAS array.

Xpeng has previously teased its City Navigation Guided Pilot self-driving system (NGP for short) but in this new video, we are given a more detailed look how everything works with it still being in beta. The vehicle driving itself in the video is the new P5 sedan, the entry level Xpeng model, but one that comes with two Lidar modules in its array of ADAS sensors, giving it an unmatched view of the road according to the manufacturer.

The last time we saw NGP in action was in September of 2021 when the automaker showed a P5 driving itself around quite a congested Chinese city. That video made the system feel very polished and competent, so the progress made through almost another year of development should be visible.

This time we are shown the route the Xpeng P5 electric sedan took through the streets of Guangzhou, as well as the number of traffic lights, intersections, changes between main and secondary roads and even how many lane merges were done during the run. One cool feature that NGP seems to have is announcing some of the maneuvers it wants to perform beforehand - it even apologizes to the car’s occupant for braking too hard at one point...

This voice guidance function seems genuinely useful in order to build trust with the vehicle and we haven’t seen any other company offer something similar. Just before the one-minute mark of the video, the vehicle attempts to merge onto a lane to its left and it begins the maneuver only to return to its lane, accelerate a bit more and then merge.

The vehicle announces that it will change several lanes, but as it aborts the initial move. It’s not actually clear what happens, but if you look at the graphic in the top right part of the screen, it appears as if its lane disappears and the vehicle has to reassess where exactly it is and this is most likely due to confusingly drawn road markings. At this point the vehicle also announces that it will first give way to other vehicles (which were approaching from behind on lanes to the left at higher speeds, but it’s unclear if this is a real time reaction, or a standard pre-recorded phrase. 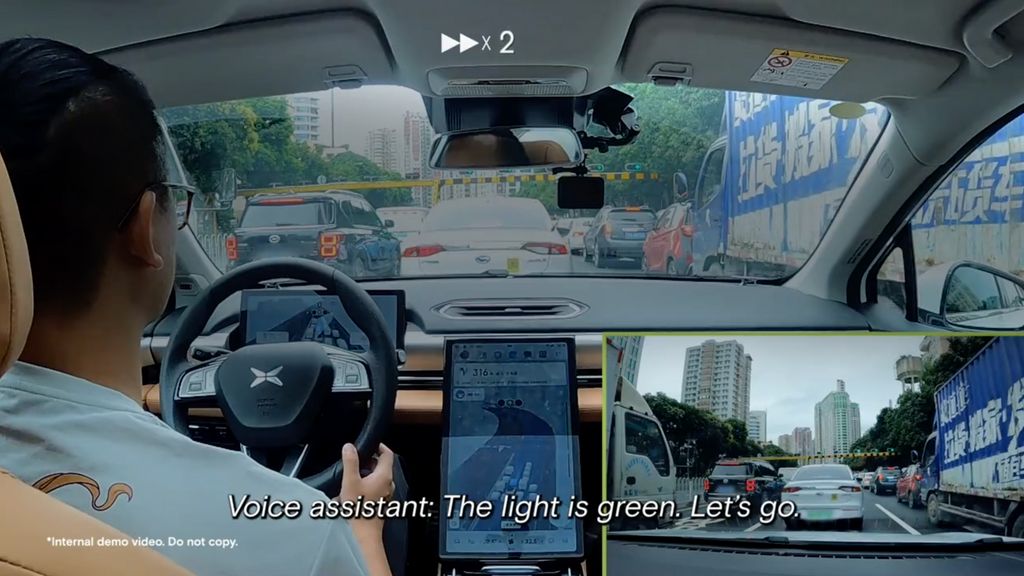 The video is well worth a watch and what it seems to show is that NGP is quite polished and capable of driving you safely to a destination without human intervention. Tesla’s Full Self-Driving (still in Beta) has been able to do this for months, but the quality of the autonomous driving does vary quite dramatically depending on where the selected route is. We suspect that in environments it is less familiar with, the Xpeng system may not be as smooth and reassuring as it was in this video.

Xpeng intends to make NGP available in somewhere between 50 and 100 cities sometime in 2023. The manufacturer says work on a safe and stable version of NGP was completed in May and that now it’s waiting for approval to get high-accuracy city maps and after this point the tech will be made available Xpeng owners with compatible vehicles. It most likely won’t be available in Europe as cars sold here won’t come with Lidar (and the P5 won't be available at all).

Xpeng P7 Catches Fire After Running Over Object On The Highway
XPeng More Than Doubled EV Sales In June 2022
By: Andrei Nedelea
++
View Comments
++
View Comments
Got a tip for us? Email: tips@insideevs.com