Only 74.1 kWhs? Is this the 279-mile EPA range version? Plus other design changes.

Some significant design changes have been made to the Tesla structural pack since we analyzed the cutaway presented at the Giga Berlin factory tour. We’ve also discovered some interesting new details about the pack based on the Cyber Rodeo cutaway.

In addition, we referenced a video of the pack production process and displays that were presented at Giga Texas.

Here’s the pack cutaway we analyzed at the Giga Berlin factory tour: 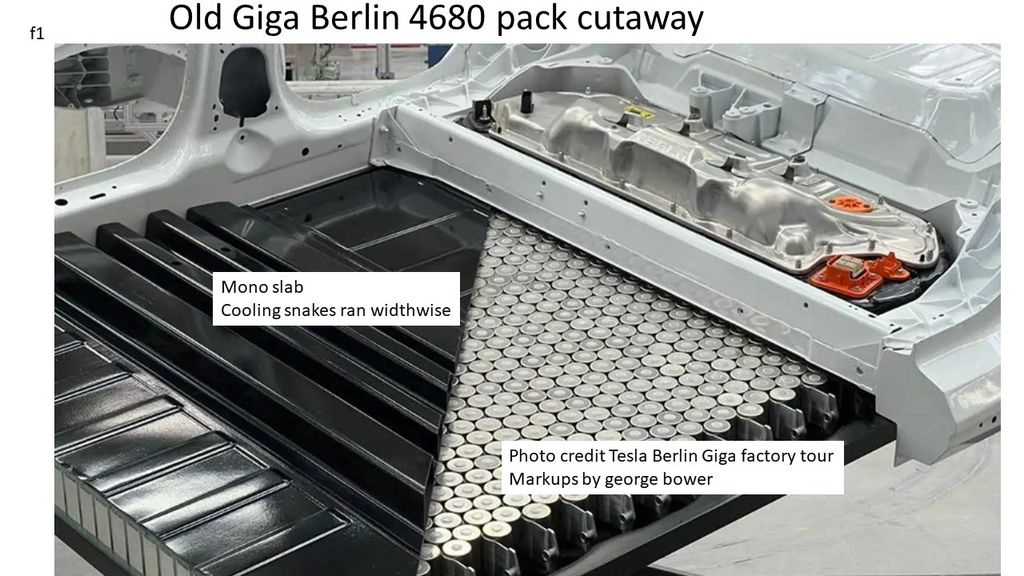 Here’s the pack cutaway at the Texas Cyber Rodeo: 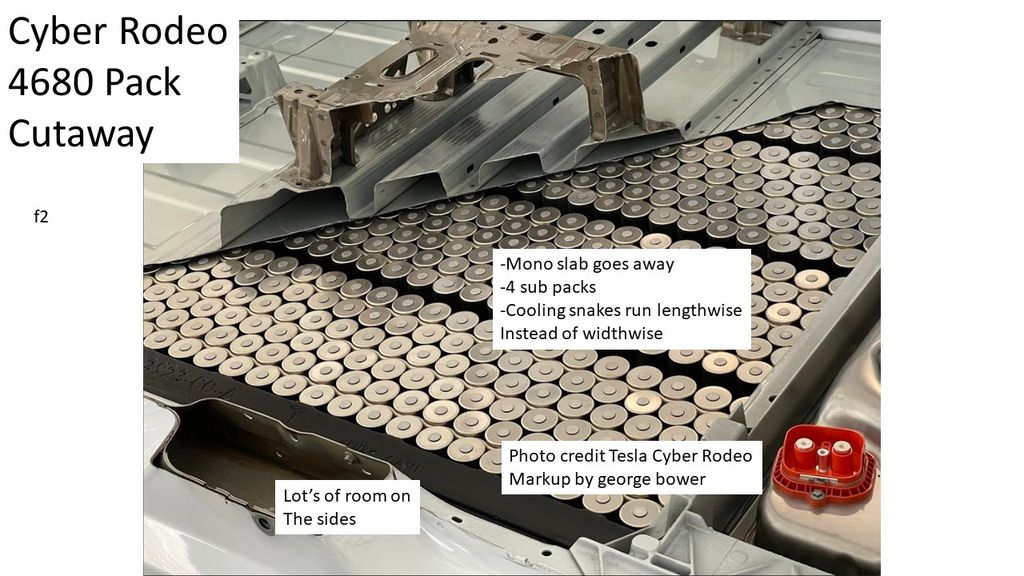 The pack cutaway shown at Giga Berlin was a mono slab. The pack cutaway at Cyber Rodeo has been broken into four smaller cell arrays. One would be tempted to say they are modules, but make no mistake that this new pack is still a structural pack and it is still cell to pack (CTP).

You can see this in the assembly process where a robot picks up rows of cells and puts them directly into the pack. We think Tesla has added strengthening ribs (or corrugations) to the pack to increase longitudinal strength thus the spaces in between the cell arrays.

The second thing we notice is that the cooling snakes now run lengthwise in the pack instead of crosswise.

Third, it now appears that most of the pack's structural strength comes from the front and rear mega castings, and the pack belly pan and top lid. The cells are now playing a very small part. (More pictures of this are presented in the detailed discussion section.)

As we can see, Tesla has retained the Bandoliers concept that they first used in Model 3. 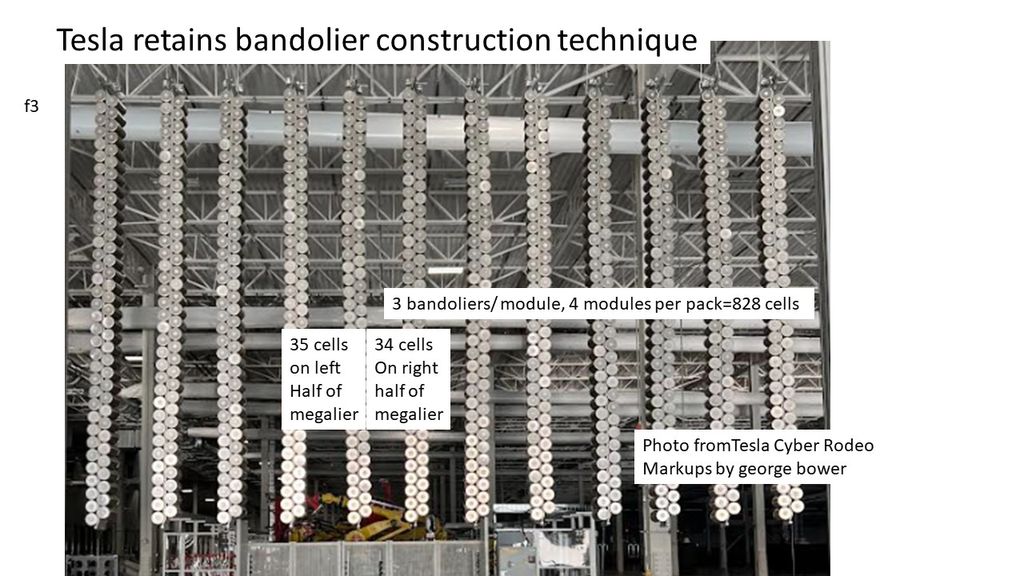 These Bandoliers are now larger to take the additional cooling flow from the bigger 4680 cells. We have renamed them “Megaliers.”

In addition, we know the cell count (828 cells) so we can calculate the energy in the pack (74.1 kWh). We have estimated the series-parallel arrangement of the cells (4, 23S9P modules making a 92S9P pack). The volumetric energy density calculates at an impressive 441 Wh/l. We also show the new current collector and BMS board design. All this is discussed in detail in the following section.

Most of the pack’s structural strength is now derived from the front and back mega castings, and the case top and bottom. Cells now playing a minor role

Figure 4 below shows the large longitudinal ribs in the mega casting that mate to ribs in the pack bottom: 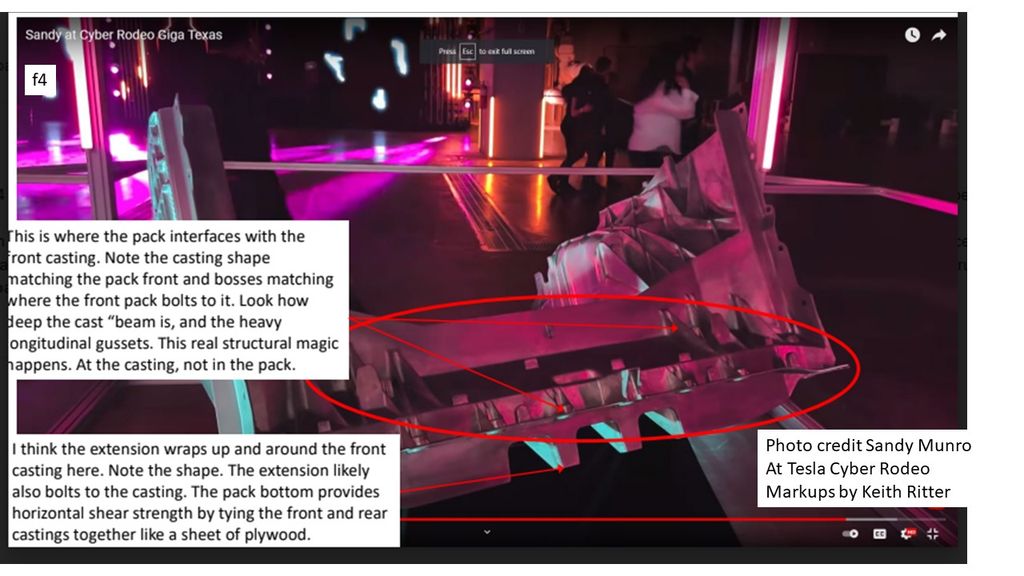 Figure 5 shows how the cell case mates up with the mega casting: 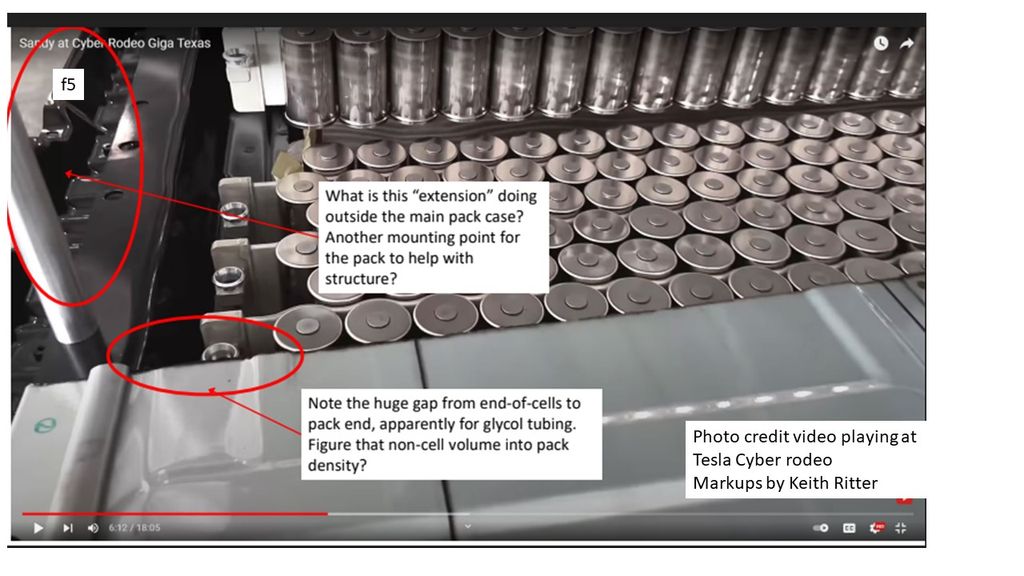 Figure 6 shows another view of the pack case extension with ribbing: 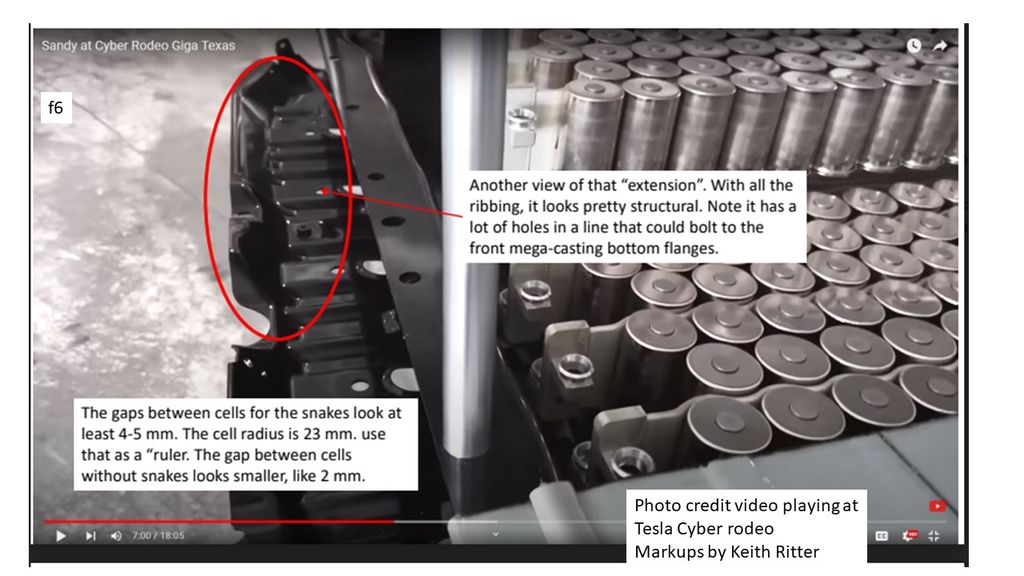 Figure 7 shows how both the pack top (which doubles as the passenger compartment floor and seat mounts) and the front and rear mega castings provide torsional stiffness: 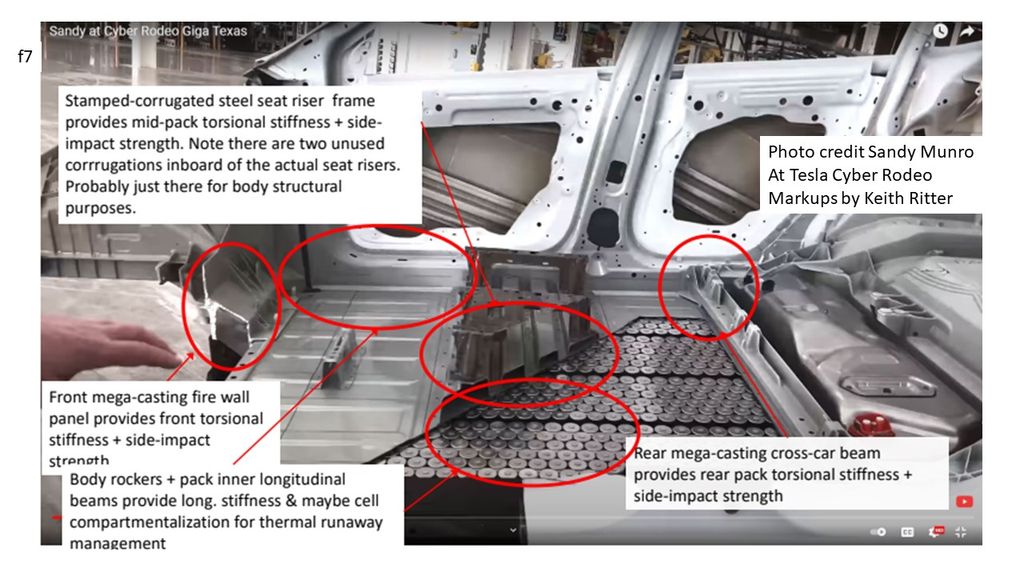 Bandoliers were an integral part of the pack construction in Model 3. They were a big departure from all of Tesla’s previous packs. They were also a big headache for Tesla during the initial phases of Model 3 production, and so we were not sure if they would be deleted in the new 4680 structural pack. But, sure enough, they are still there, but they are much larger than the 2170 bandoliers, so we have renamed them “megaliers.”

Here’s where we get our first opportunity to count cells. Referring to figure 3 above, there are 35 cells on the left side of the megalier and 34 cells on the right side for a total of 69 cells per megalier, and at 12 megaliers per pack, that gives us a total cells count of 828 cells. That gives a total usable pack energy of 74.1 kWh based on the assumptions shown in figure 8. 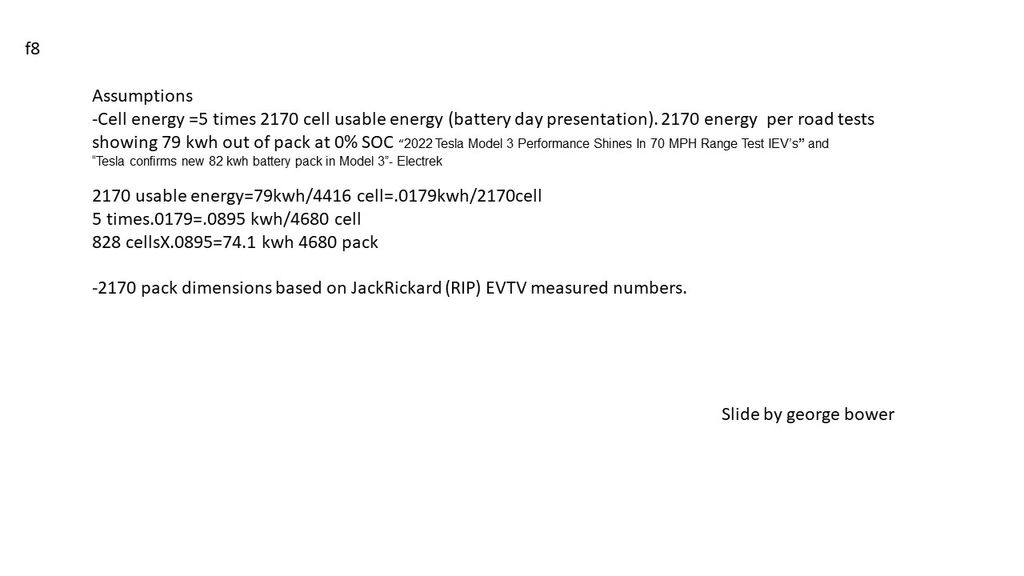 We estimate that this results in four 23S9P cell arrays as shown in figure 9. That results in a 92S9P pack: 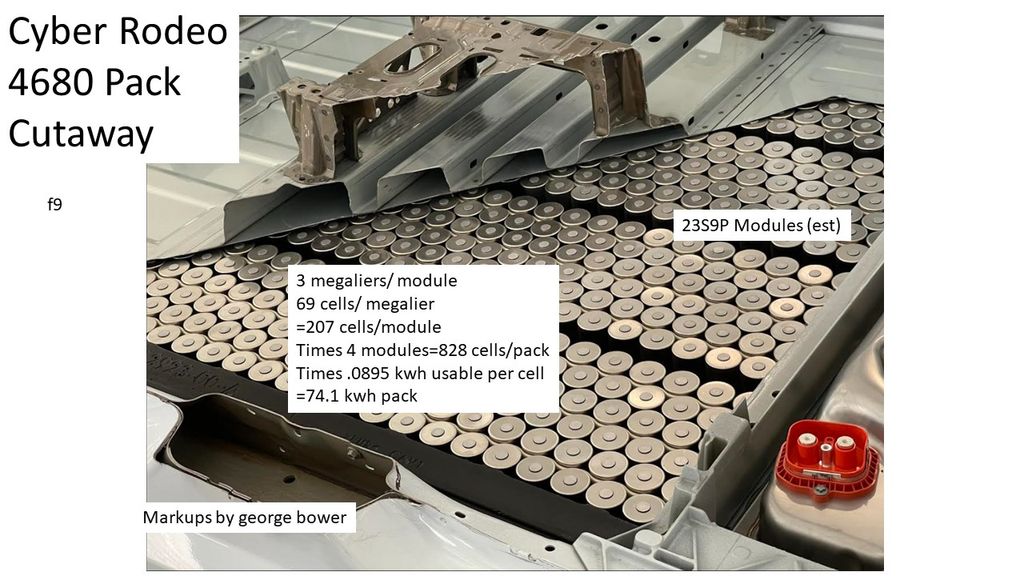 We know the Model 3 pack dimensions. Jack Rickard EVTV measured the pack and modules in a video of the Model 3 teardown. We used those dimensions for our pack layout that follows. Also, we know the cell spacing from photos and the cell counts so we can layout the pack. 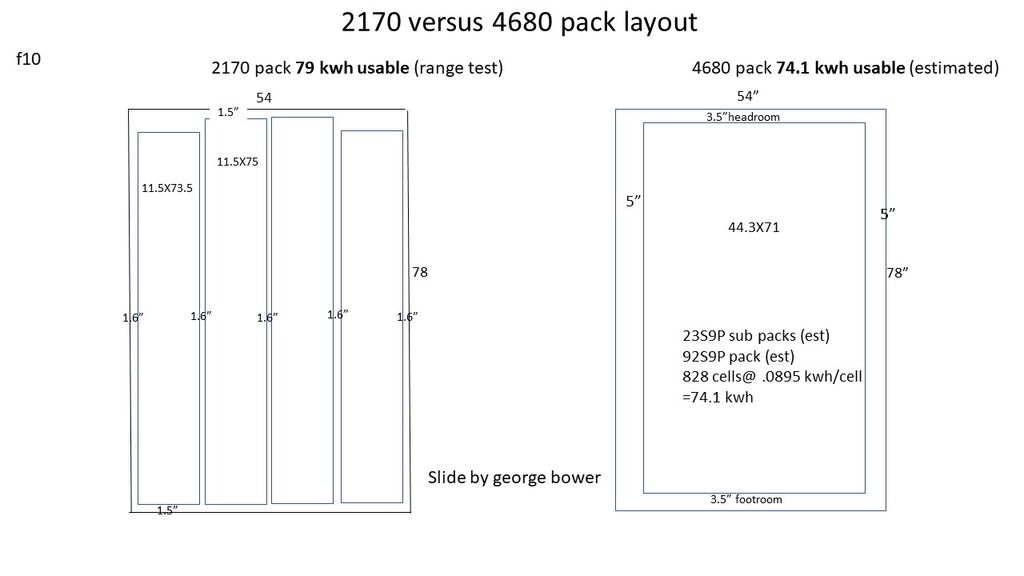 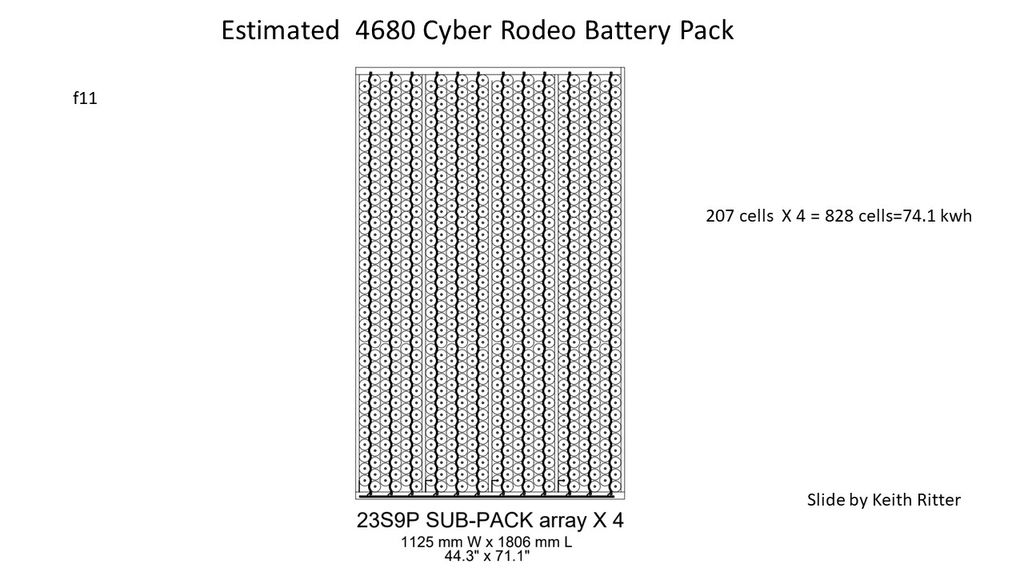 The 4680 sub packs are roughly the same width as the 2170 modules (11 inches) but they are shorter. If you remember the 2170 pack has two short and two long modules. In the 4680 pack, we assume all the cell arrays are the same. We end up with a fair amount of room around the pack. We estimate 3.5” of room at each end of the pack and 5” on each side. This leaves room for a longer or an additional bandolier.

Tesla has integrated the pack lid and the floor of the passenger compartment. This has made it so they can squeeze a 10 mm taller cell into the car. We also have a Munro teardown of the Model S Plaid that shows the addition of what appears to be a Mica fire-retardant layer into the Plaid pack top, and we can see it in the Cyber Rodeo display under the cells of the pack (an orange mat). It is also mentioned in a Tesla Patent. 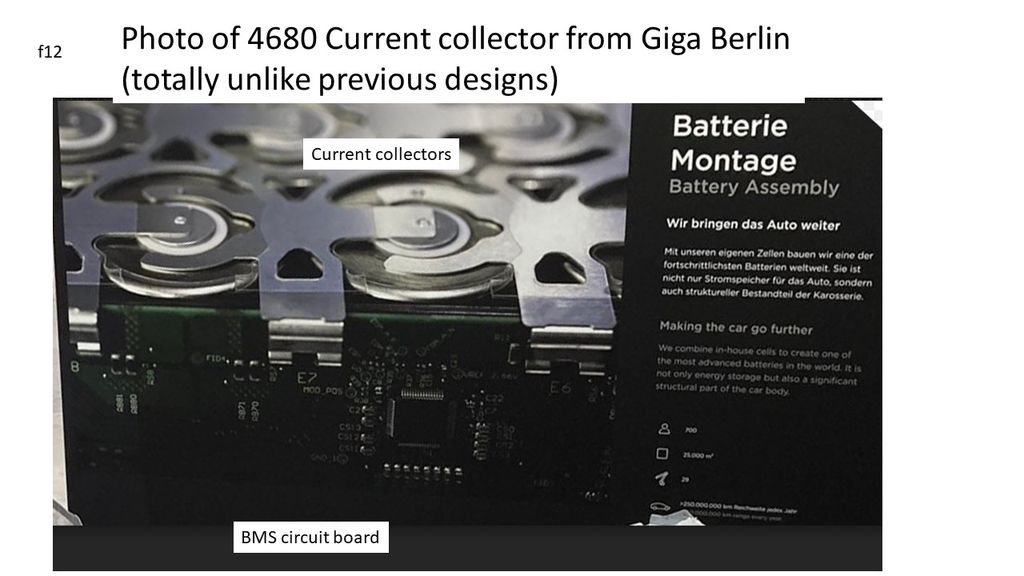 We also now have a picture via a German publication showing the new current collector design and the placement of the BMS board on the side of the pack. 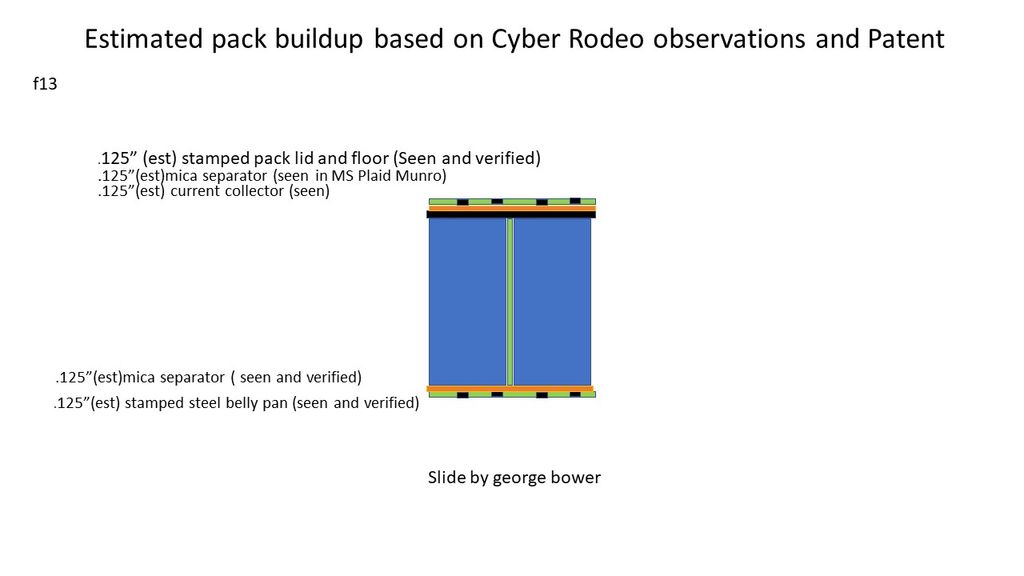 Pack energy density comparisons are difficult because there’s always all kinds of other stuff in and around the cells. For example, Tesla includes the electronics penthouse in the pack. Therefore, we think it is fairer to make the comparisons at the module level. It gives you a sense of how well they package the cells. 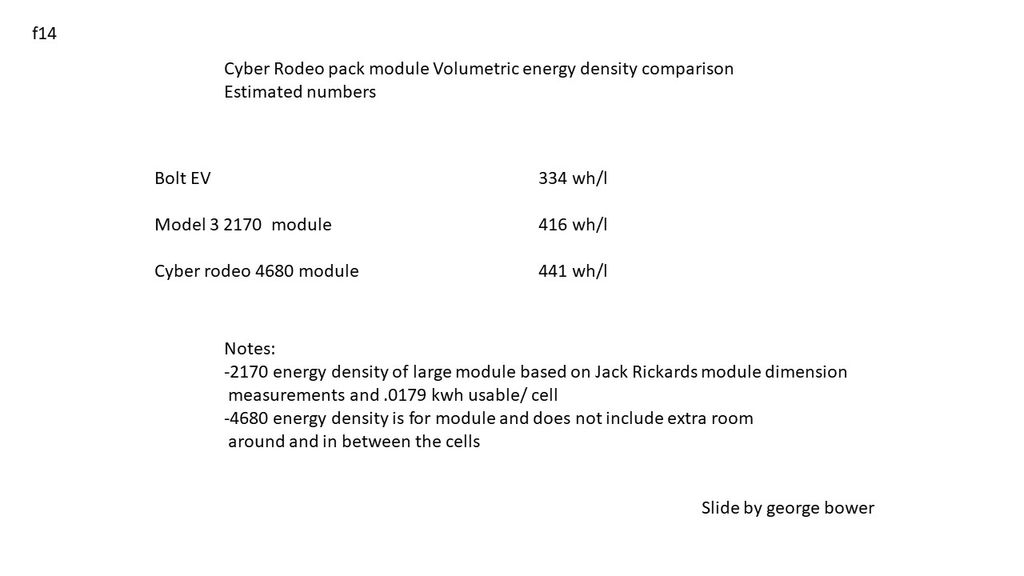 The first question is, why does this pack only have 74.1 kWh estimated? You can see from our layout in figure 10 that there appears to be a lot of room in this pack for more cells. The most obvious answer is Tesla is cell limited. We know this to be true since these cells come from the Kato Road pilot plant and Tesla is still working on rate and yield at that plant.

The second question is about the latest Model Y EPA range tests that only show 279 miles range. Some simple math can show that 74.1 kWh should give us more like 300 miles range, not 279 miles.

Our guess is that these first packs have been derated until Tesla gets more time on the pack. As they get more confidence, they can crank the pack up to its full potential. And when they get the Austin battery line up and running, and they have more cells, they can start putting more cells in the pack for more range.

Let us know what you think about that in the comments section.