The Tesla Model S pack has gone thru quite an evolution. The original pack was prone to overheating in lightweight track racing and could not tolerate the V2 charging power levels. One look at the details of the original packaging and it’s obvious. It only had one cooling tube per module.

There were 16 total modules with 7104 cells, so that means one module had 444 cells all cooled by one ribbon-shaped cooling tube that snaked its way through the module. That’s a lot of cells to cool in one pass! No wonder it over-heated. 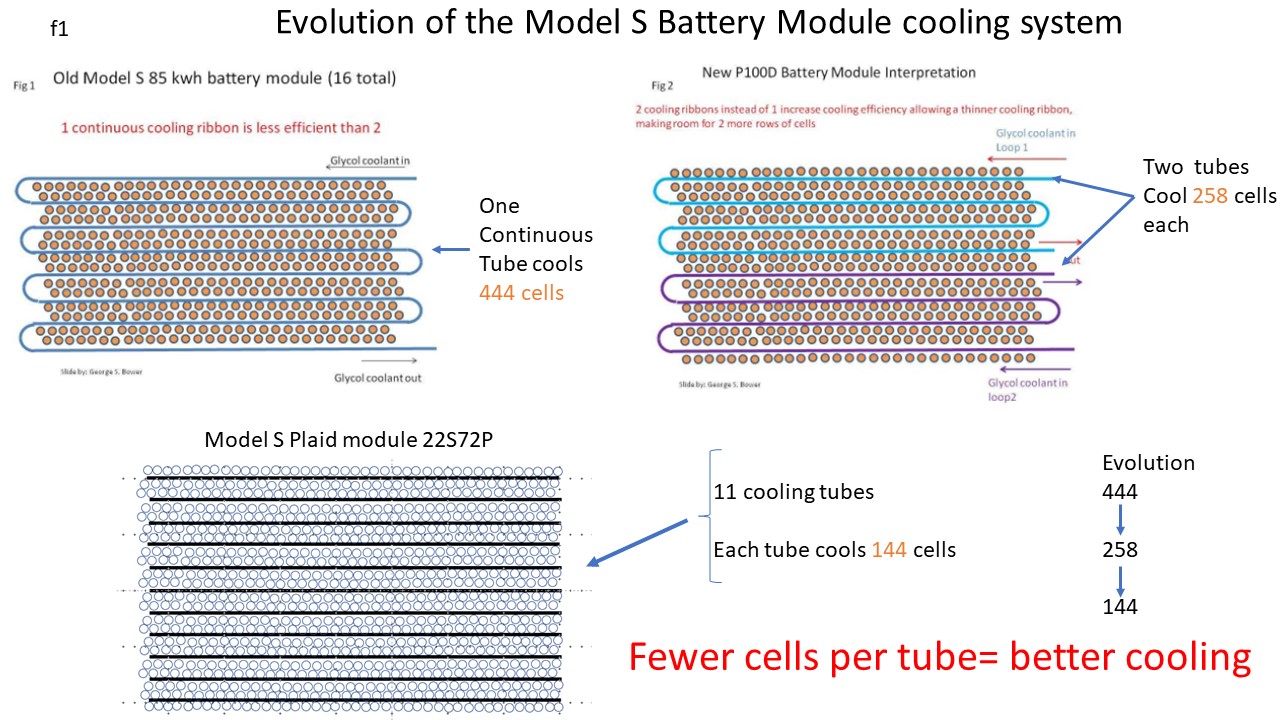 When the P100D came out, Tesla broke the one cooling tube into two tubes. The company also slightly increased the cell count in the pack, but the number of cells cooled by one tube pass was decreased by a factor of almost two (258 vs 444).

Now, in the Plaid, we see another reduction in cells per tube by (roughly) a factor of 2 to 144 cells. The Plaid has been totally re-engineered not only to make it simpler to produce, but also, and most of all, to handle the huge increase in heat rejection. Tesla reduced the number of modules in the pack to 5 from 16. Remember the double stack of two modules up front in the old Model S? It’s gone, with that space now occupied by electronics. 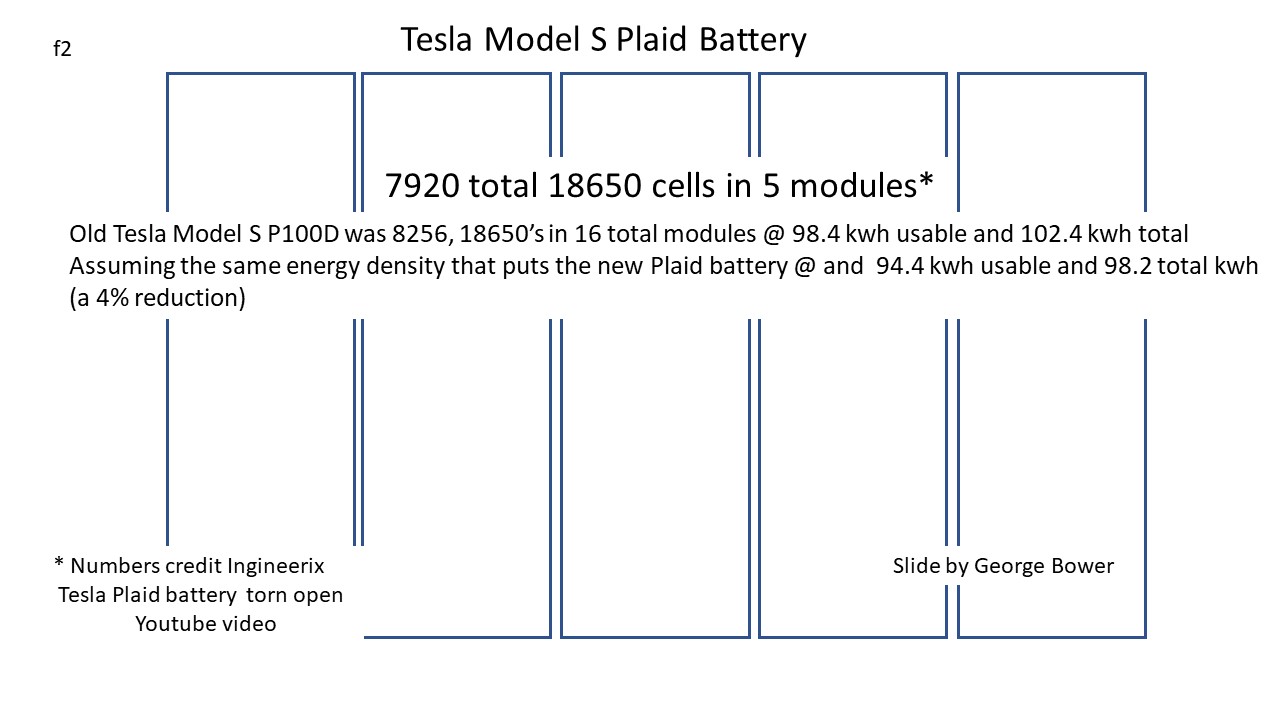 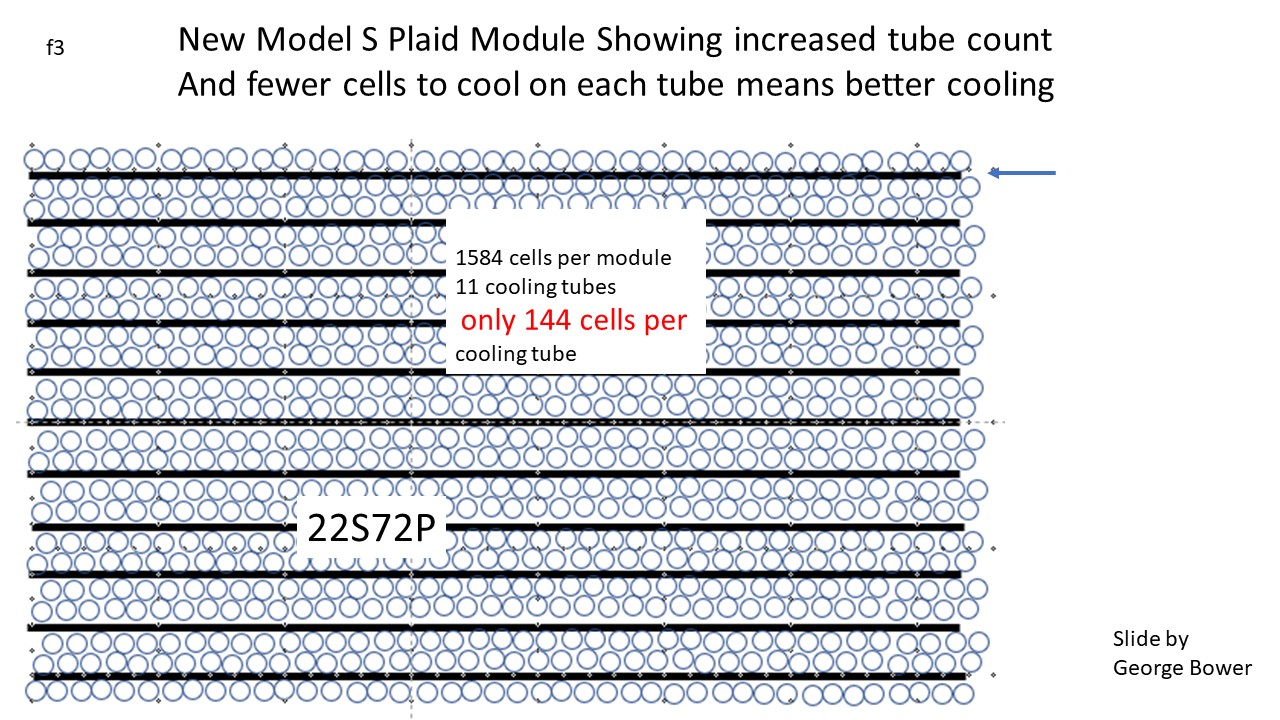 With all of that said, the new pack certainly isn’t a structural pack like the new Model Y and Cybertruck will be. It more closely resembles the original Model 3 design, with individual modules that are one solid chunk of cells bonded together with a material that acts as a resin and has fire retarding characteristics.

However, we don’t know whether Tesla is using the same assembly technique as the Model 3 modules, where “bandoliers” of cells are glued to the tube first and then assembled into the module. Tesla had problems getting the “bandolier” system to work at first and had high rejection rates. 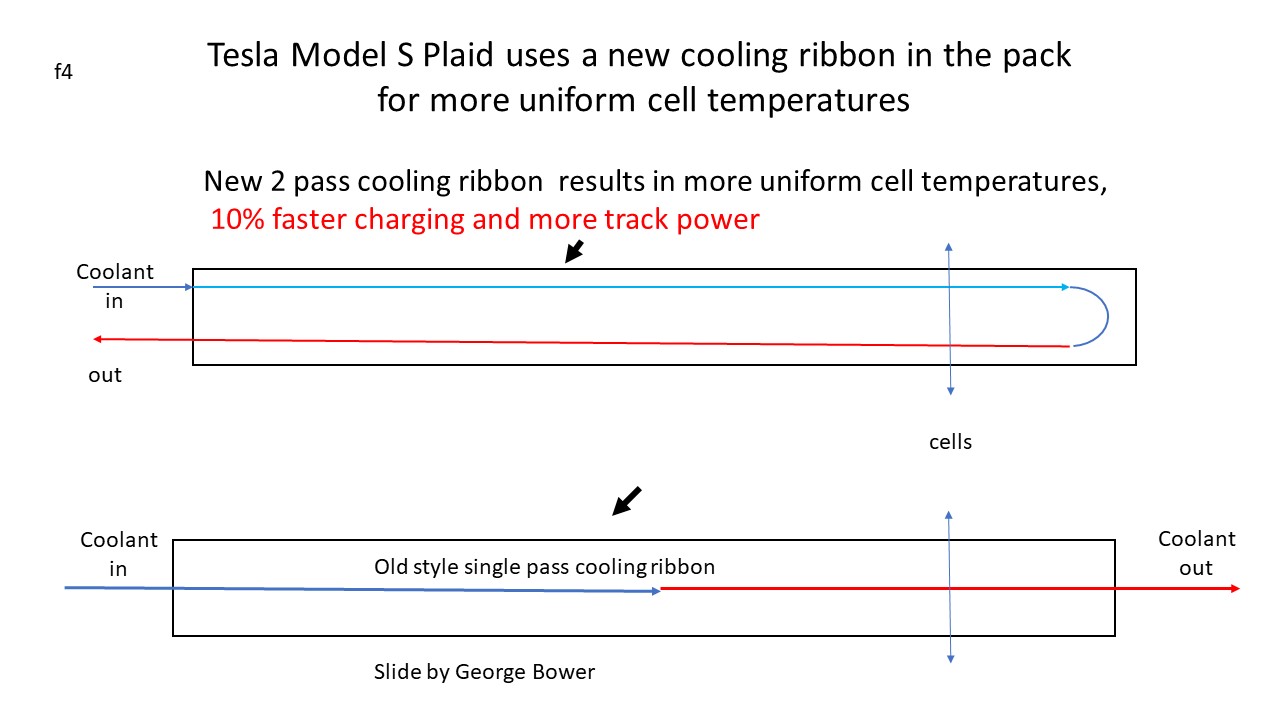 The 2-pass U-Flow cooling tube is mentioned in both the patent app “Integrated Energy Storage System”@[0037] and it is called out at 3:30 in the Ingineerix youtube video “Tesla Model S Plaid Battery Torn open.” The glycol coolant goes into the cooling tube on the top, makes a longitudinal pass, makes a U-turn, and goes back to the bottom of same cooling tube. 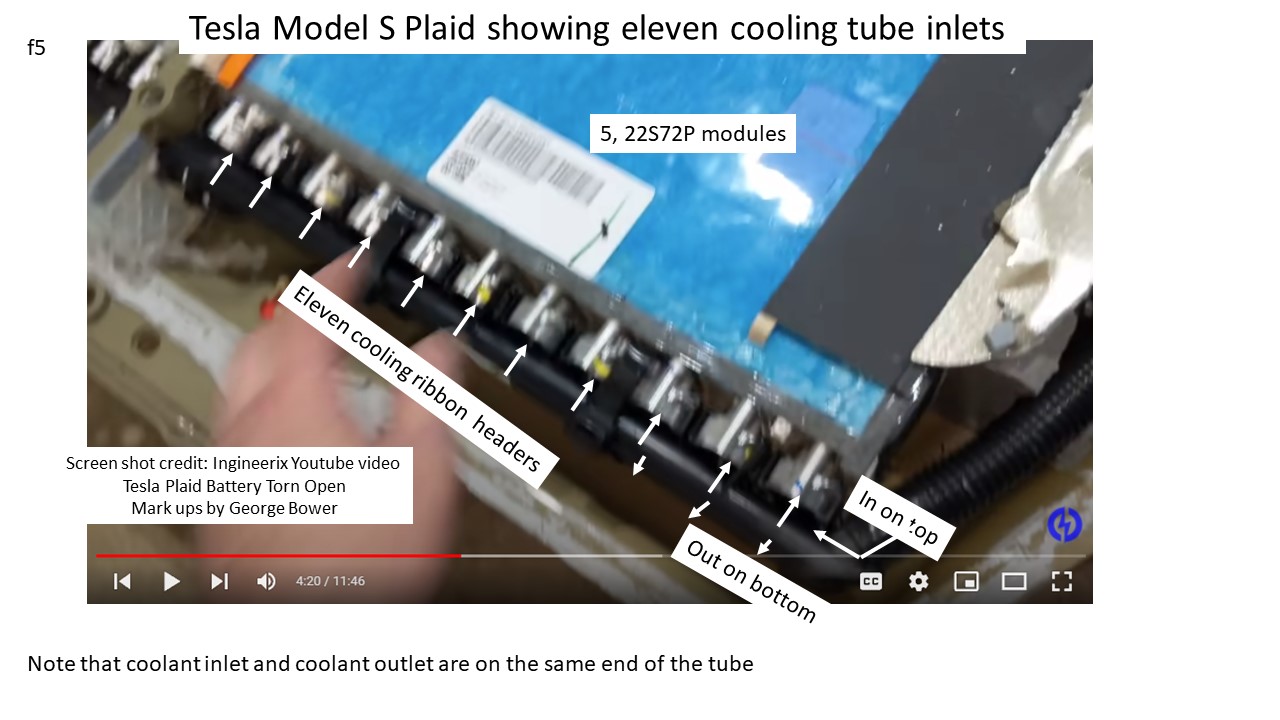 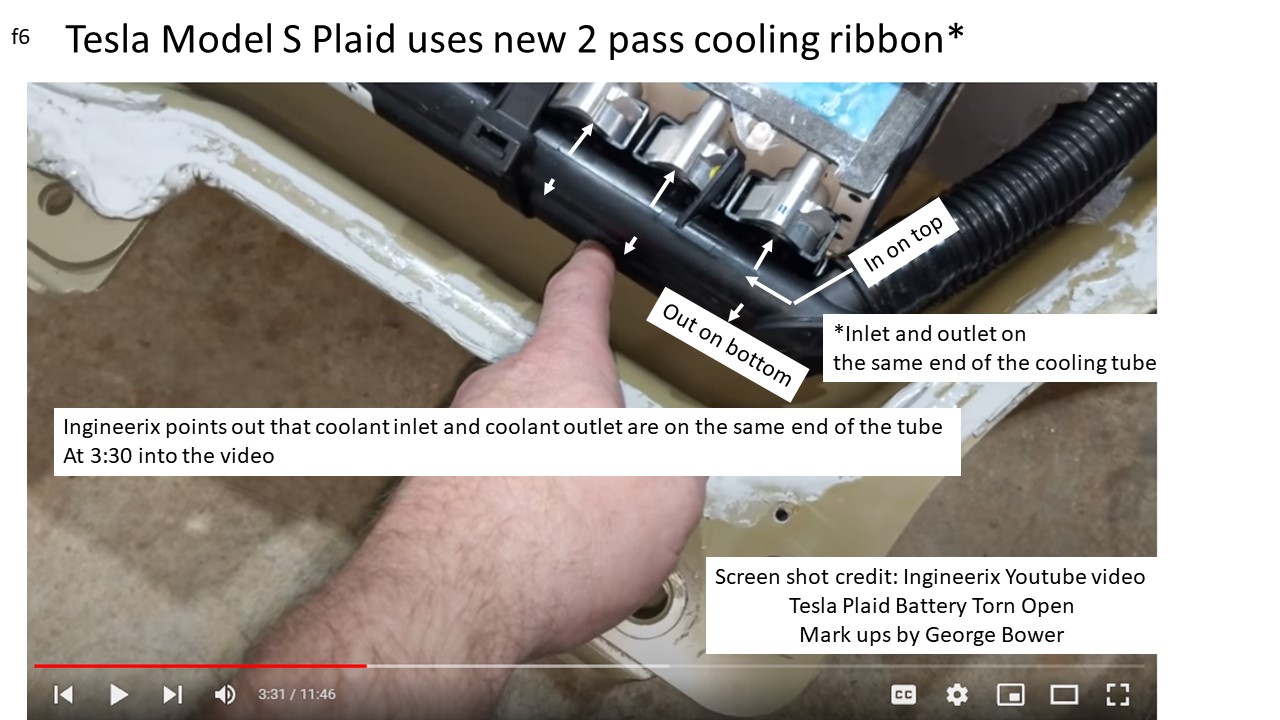 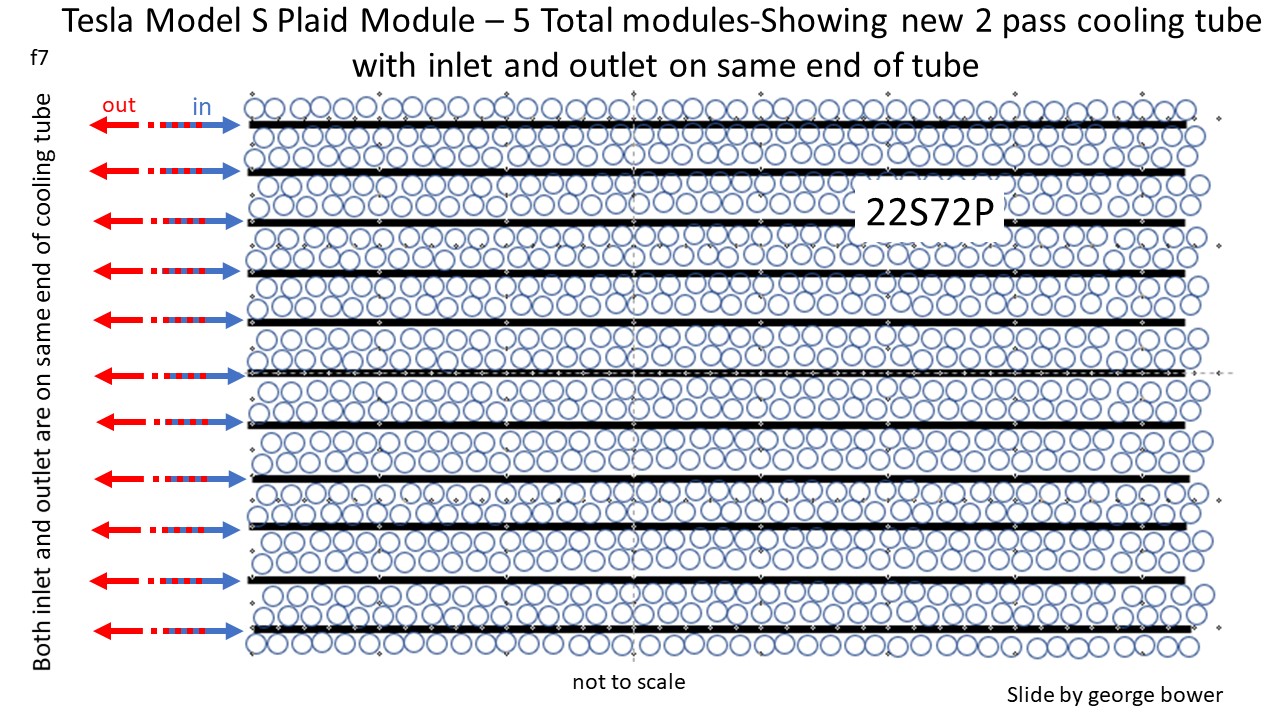 The way the cooling system is controlled is based on the maximum cell temperature, not the average. If the high-to-low spread on the cells is 7° F with single-pass, the new U-Flow arrangement evens out the temperature, and the max temp is reduced 3.5°. This allows more power before hitting the temperature limit during charging, and more power on the track. We estimate an approximate 10% increase. 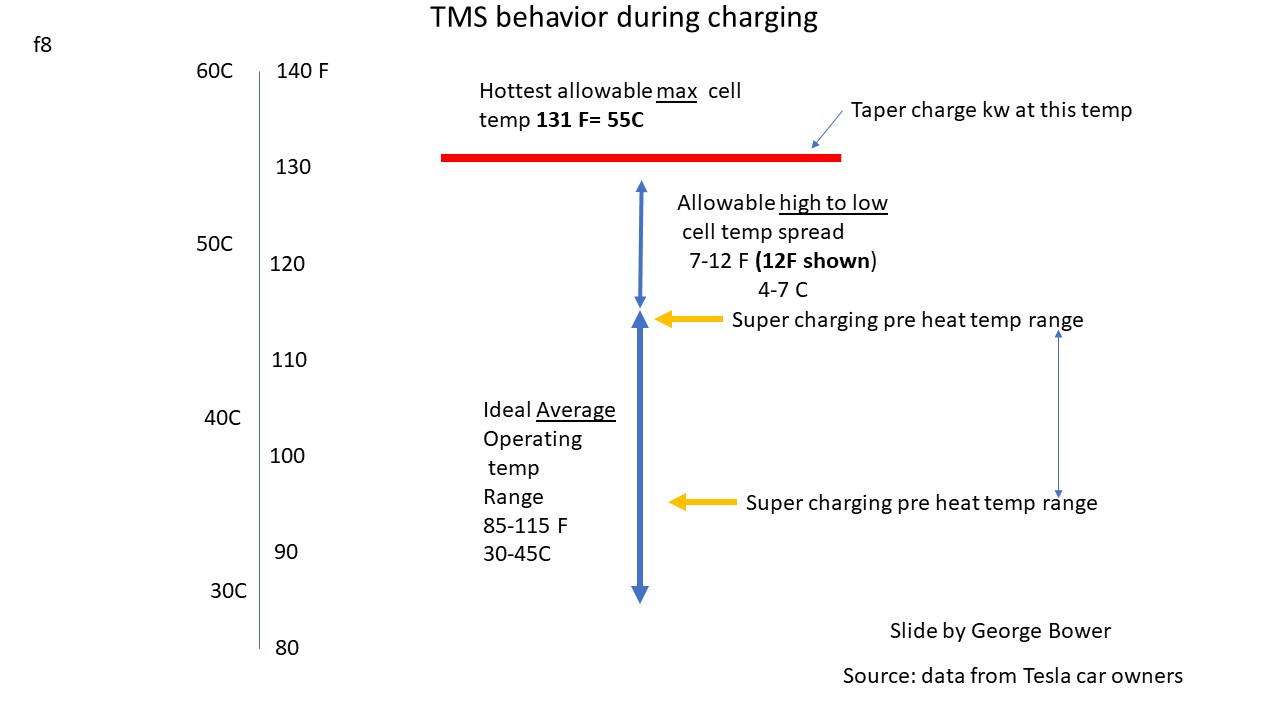 With 2-pass, every cell experiences cooling from both passes. The "1st cell" gets both the coldest glycol on half the cell and the hottest glycol on the other half. The last cell, before the turn-around, gets mid-temperature glycol on both halves. The "average" cell-to-glycol delta T, factoring in both passes, is the same for every cell. Assuming the cell’s outer can has sufficient conductivity to "even out" the cooling within the cell, the net effect is that all the cells get the same cooling effect and are cooled at the same temperature.

To keep the same snake flow velocity, you cut the flow in half and double the in-to-out glycol delta T. Same overall heat transfer over the same overall area. The pump has to generate twice the pressure and half the flow rate per snake, so it is sized differently.

This also affects how the stack chiller is designed...lower flow, higher delta T, which means more series flow through it from plate to plate and less parallel flow. This is usually done with the stamped internal passage routings. You wouldn't see any change in the chiller exterior shape or size. The chiller is exactly what is says. It chills the glycol coolant that runs through the pack and transfers the cell heat to the refrigerant.

We use this 2-pass effect all the time in HVAC. 2-pass glycol or refrigerant heating or cooling coils make sure all the air going through a coil is heated or cooled the same. When we do floor-slab heating, we snake half the heating supply evenly around the slab, then double back and snake the second half right next to it. This ensures the entire slab is heated evenly and there are no "hot" or cold spots.

The Hyundai plate does the same thing, except instead of individual module plates, it does it with a single plate using an elaborate snaking of a single passage out to contact half of every cell and then doubling it back, similar to how we do the slab-heating tubing.

LG attempted to do that with the Chevrolet Bolt EV, but it messed up the tee concept and ran the snake passages the wrong way and got some cells in each module getting all cold glycol and others all hot glycol. Each module overall got even cooling, but you have to get it at the cell level, not the module level. 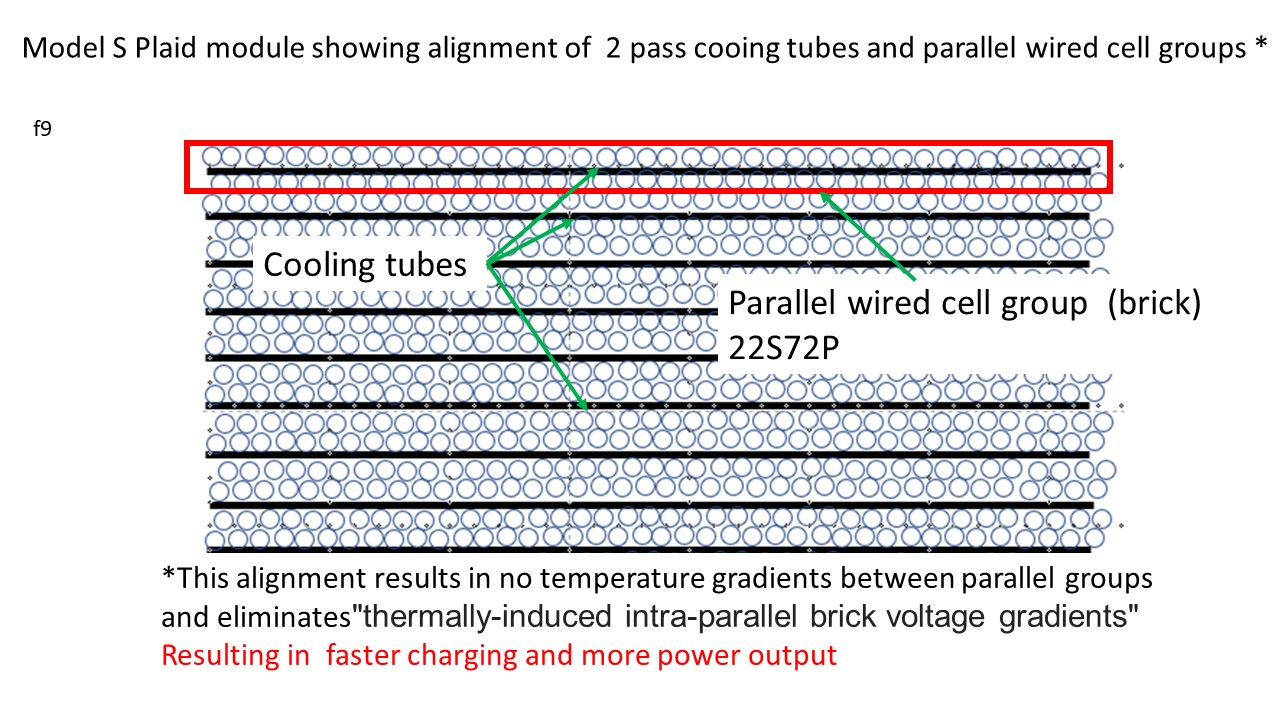 Tesla claims the primary advantage of this "U-FLOW" channel is it keeps every cell within a single "brick" at the same temperature, which ensures that every cell within that brick has the exact same thermally-based internal resistance and voltage. This would be specific to the new Model S module, as the module's "bricks" consist of 72 cells, all running in a single line laterally from one side of the pack to another.

With 22 rows of cells, each module has 22 "bricks" and 11 snakes. By running one "U"-flow channel for each brick, all 144 cells in those two bricks will be at exactly the same temperature. if Tesla ran a single-pass snake with the same lateral routing, the first cell in the brick to get glycol cooled would be a lot cooler than the last cell, and the first and last cells would have different internal voltages, creating "thermally-induced intra-parallel brick voltage gradients" unbalanced current flows, and uneven temperatures, which impacts the Supercharging speed (which was my original main point).

[0037] In one embodiment there exists within each cooling channel there is a separated "supply" and "return" section, also known as "U-FLOW", which can be used to collapse thermally-induced intra-parallel brick voltage gradients that negatively impact performance via current balance and supercharge temperature limits. The "U-FLOW" arrangement may also be used to reduce cell array overhead packaging volume by consolidating/more efficiently nesting bulky components/interfaces along a single side of the cell array. Another benefit of consolidating the hydraulic interfaces to a common face of the cell array is a reduction of sealing interfaces to be included on the resin container (potential leak points) which may also consequentially ease the packaging of nearby measurement & sensing electronics components.

So, the U-FLOW concept was essential for making the new module's cell-brick design work. The Model 3/Y 2170 modules and the 4680 pack are both designed to run the snakes longitudinally, but each snake passes through 23-25 bricks, so the maximum thermal gradient in each brick is only about 4% of the total snake delta T.

The "intra-parallel voltage gradient" therefore is apparently negligible, and Tesla decided it could continue with the simpler 1-pass snake for the new 4680 cell pack, even though it does create some cell temperature differences that negatively impact the maximum Supercharging speed. The old Model S with misaligned cooling tubes and parallel cell groups is shown in figure 10. The misalignment is obvious. 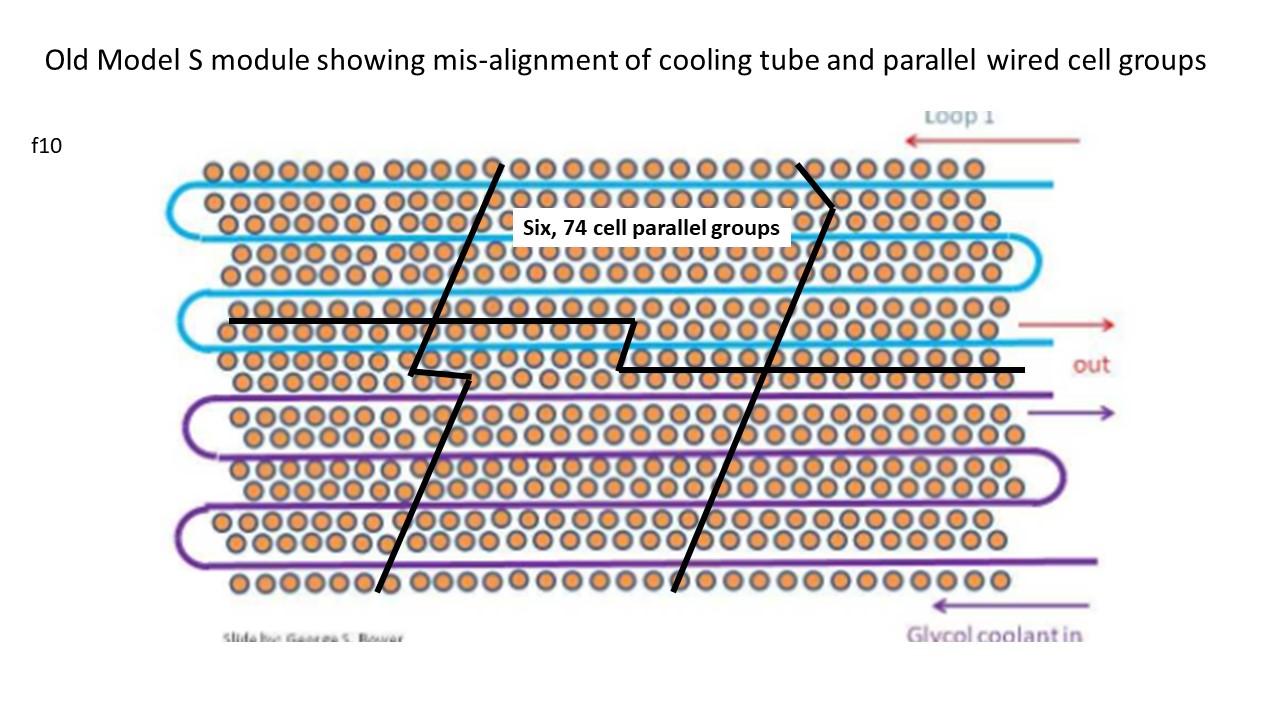 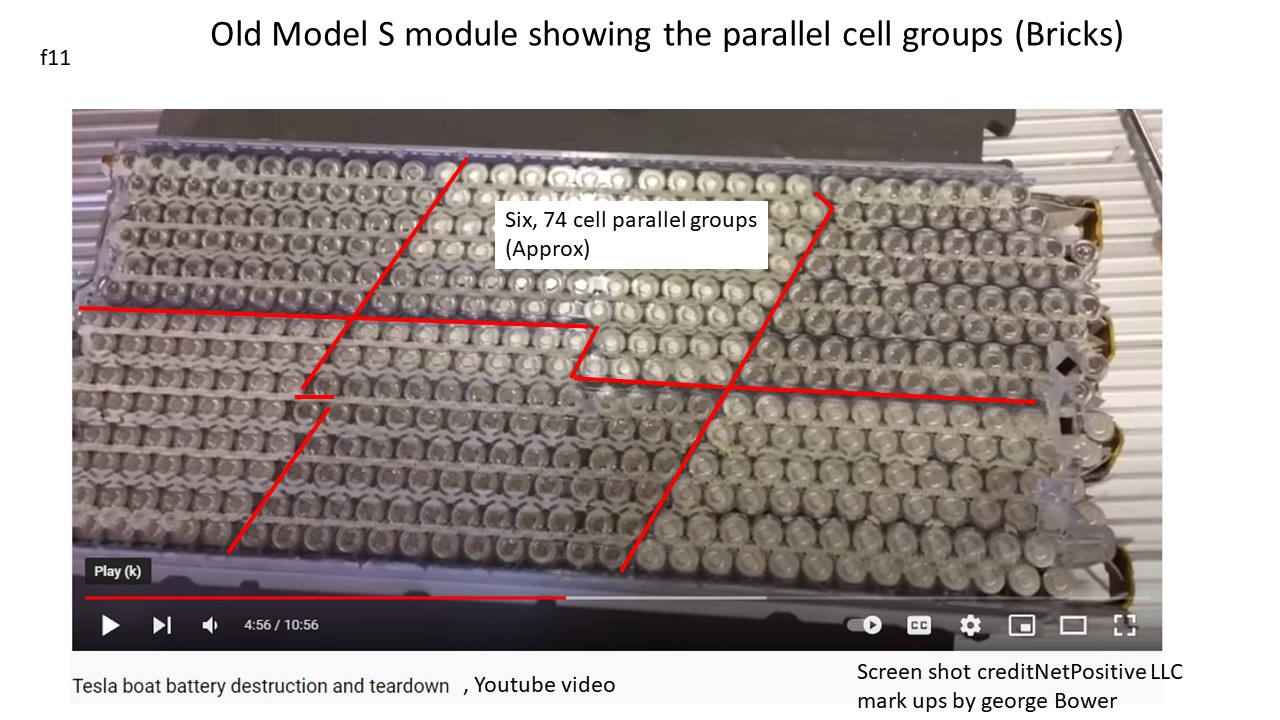