A Rivian Owners Forum poll shows that almost 63% of respondents plan to cancel their R1T and R1S orders.

Rivian's major price hikes announced for the R1T and R1S electric vehicles are not going down well with the company's early supporters.

Reservation holders have seen the prices of their trucks and SUVs skyrocket after receiving emails from Rivian informing them that their preorders are are affected by the price hikes.

While the company says the adjustments are necessary due to "inflationary pressure, increasing component costs and unprecedented supply chain shortages and delays for parts," some customers see the price increases—as high as 20%—as hard to swallow and say they will cancel their orders.

A Rivian Owners Forum user has created a poll asking how reservation holders are reacting to the news, and the majority of respondents say they intend to walk away from their preorder.

At the time of writing, 223 voters out of a total of 355 said they won't be staying with Rivian after the price increase. That's 62.8% of respondents, a percentage that's bound to worry Rivian if it's remotely representative of the entire group of customers who have booked R1Ts pickups and R1S SUVs.

About a quarter of poll voters—83 people or 23.1%— declared themselves undecided, with only 50 or 14.1% saying they are sticking with Rivian.

Another issue many forum members have with the price hikes is that the R1T and R1S will exceed the $80,000 threshold, meaning they won't be eligible for a federal tax credit anymore under the new Build Back Better framework. 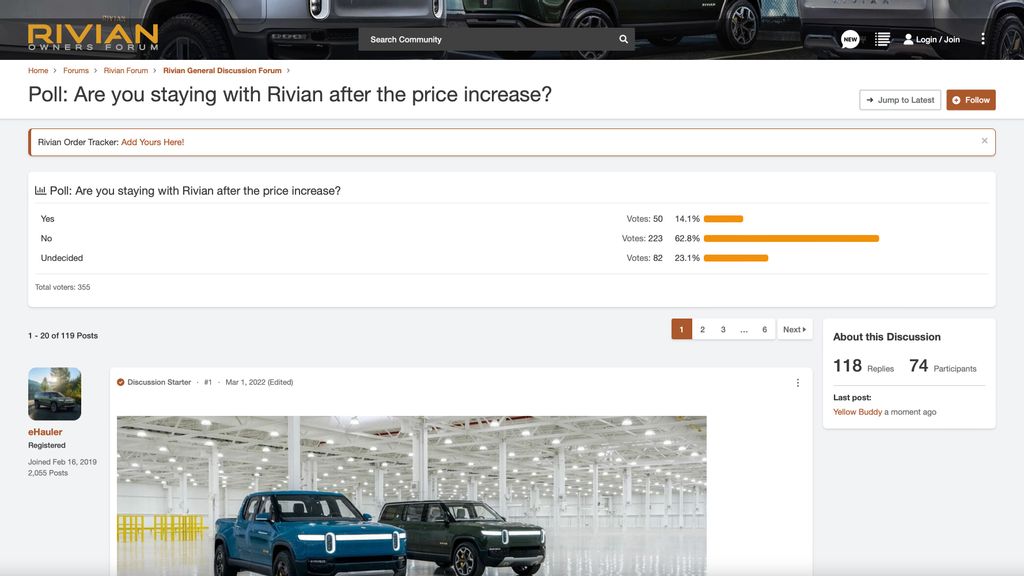 The comments in the Rivian Owners Forum and Rivian Forums are overwhelmingly against the price hikes and Rivian's treatment of early reservation holders, so it will be interesting to see the effect this pricing adjustment will have on reservations.

Some forum members seem to believe there's more to the price increases than the reasons cited by Rivian, namely that the EVs were priced too low to begin with to attract orders. Their sentiments are echoed by former Rivian executive Laura Schwab.

Last fall, the EV startup abruptly terminated Laura Schwab as head of sales and marketing. In a recent lawsuit against her former employer, she said one reason she was fired was because she questioned Rivian's pricing strategy.

The former Aston Martin executive said in her suit that the R1T's starting price of $67,500 was too low. Automotive News reports she claims she raised this issue with several execs, including Jiten Behl (Chief Strategy Officer), Stuart Dixon (Director of Product Management), and Andy Zicheck (Principal Product Manager).

"Mr. Behl brushed her off. Eventually, Mr. Hunt raised the issue with Mr. Behl, at which point Mr. Behl agreed that they would need to raise the vehicle prices after the IPO."

Excerpt from the Laura Schwab lawsuit

With the litigation still ongoing, this serious allegation only reflects Laura Schwab's side of the story. Rivian made no comments about the lawsuit when it was filed in November 2021, citing a mandatory quiet period ahead of its IPO.

Fully Loaded Rivian R1S SUV Shows $106,515 Price On Configurator
Rivian R1T: How Much Is A Maxed Out Version With The New Pricing?