Solid Power is already backed by Ford and BMW.

SK Innovation and Solid Power announced today a partnership to develop all-solid-state batteries under a memorandum of understanding and joint development agreement.

As part of the deal, SK Innovation will invest $30 million to acquire a stake in Solid Power, which is already backed by multiple companies, including Ford, BMW, Hyundai, Samsung, A123 Systems and Umicore.

The start-up, founded in 2012, has developed (as of 2020) a 22-layer, 9 x 20 cm automotive battery cell with 20 Ah capacity, which was independently tested by automotive OEMs. We assume that the results are promising and now SK Innovation will step in to bring the solid-state battery to the market.

Solid-state batteries use a solid electrolyte instead of a liquid electrolyte or a gel electrolyte and should reduce the risk of fire, improve volumetric and gravimetric energy density, as well as other performance (like fast charging).

The development target is a volumetric energy density of at least 930Wh/L (33% higher than currently available, according to the press release). According to estimates, the range of electric cars could be increased from 700 km to 930 km.

"Under the JDA, the two companies are committed to set out to produce all-solid-state batteries employing the NCM (nickel, cobalt, manganese) cathode materials used in lithium-ion batteries and high-content silicon anode materials. These materials are expected to realize a target energy density of 930Wh/L or higher. If achieved, this signifies approximately 33% higher performance than that of current lithium-ion batteries. In other words, assuming a battery of the same size, an electric car capable of running 700 kilometers on a single charge could travel up to 930 kilometers with the new all-solid-state battery." 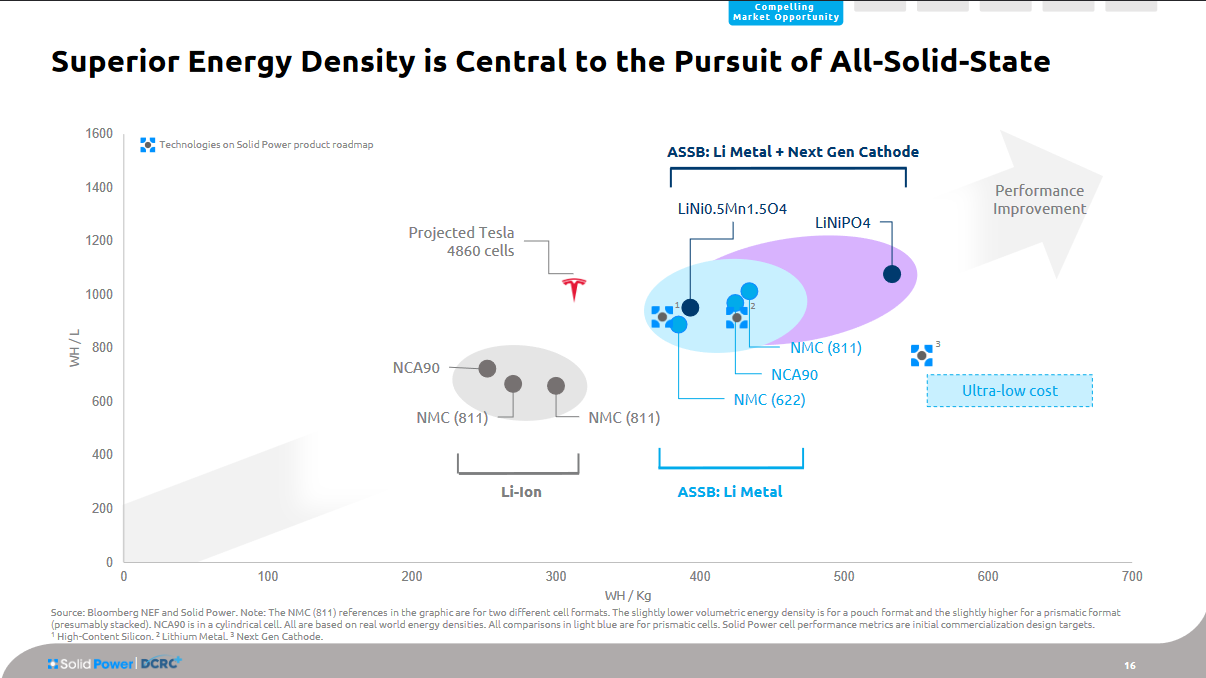 The second point of the partnership is the production of solid-state batteries at existing lithium-ion battery plants to reduce investment costs and time for facility establishment.

"The two companies also plan to validate that Solid Power’s all-solid-state-cells can be manufactured on existing lithium-ion battery manufacturing equipment, thereby obviating the need for expensive and time-consuming re-tooling of battery manufacturing plants. Under the JDA, Solid Power will leverage the plants owned by SK On, SK Innovation’s battery business subsidiary, to produce all-solid-state batteries."

"Solid Power is already producing prototype all-solid-state cells on its pilot production line at its headquarters located in Louisville, Colorado, in the US. It also is producing sulfide-based solid electrolyte at its headquarters and recently announced it will be bringing on additional electrolyte manufacturing capacity at its new facility in Thornton, Colorado, in the US. SK Innovation plans to work with Solid Power to further develop Solid Power’s existing all-solid-state battery development technology by raising energy density and jointly tackling the technological challenges of commercialization."

Doug Campbell, CEO, and co-founder of Solid Power, notes that the partnership is designed to validate that Solid Power’s all-solid-state production processes are scalable and compatible with existing lithium-ion production technology.