It is a momentous time for electric vehicles throughout Europe.

September sales have brought fresh records throughout the continent’s major car markets, and all this is happening in the background of a wider crisis for traditional powertrains. In a quarter-end month filled with expectations for market share as well as individual model exploits, Italy’s car market does not disappoint and boasts historical highs and new entries.

Unrae statistics are out and once again we find ourselves updating recent highs (and lows, depending on the technology). The overall car market slows down by a whole third year-on-year (YoY) to just over 106,000 registrations – they were more than 157,000 a year ago – with traditional petrol and diesel engines more than halving their numbers and reaching new lows, at 25% and 19.1% respectively, well below the 50% mark combined. Traditional hybrids now make up 31.3%, near August records, thus consolidating their status as most popular powertrain ahead of petrol, a position they’ve been holding since July.

Full electrics are the absolute star of the month. With a record 8,492 units, BEVs more than double YoY (from 4,099 registrations a year ago, when current incentives started), update the previous March high and reach a fantastic 8% market share, helped by the lower than usual total registration numbers. With such a quarter-end performance, can we hope for an even stronger push in the remaining three months? Certainly, however, this will depend on supply by manufacturers meeting demand. 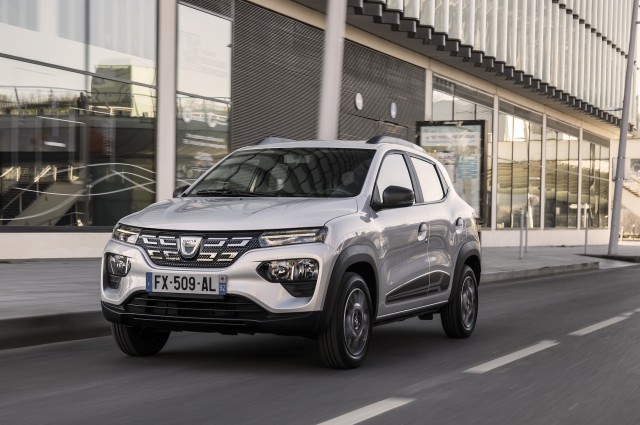 Plug-in hybrids score 5,507 registrations, far from recent levels but nonetheless an almost 90% increase YoY. This figure is worth 5.2% market share, in line with the rest of the year but much lower than BEVs’ result. With PHEVs registrations steady, we could be witnessing a return to favour for full-electric models over plug-in hybrids, as was the case until the end of last year. In the era of the chip shortage, are legacy carmakers finally ready to push their full electric offerings “full steam” (!) over ICE and hybrid variants? It would seem wise to do so, and we shall see how they position themselves in the last quarter of 2021.

With this exceptional month, combined plug-in registrations soar to an outstanding 13.2% market share, itself a new record (they broke past 10% for the first time in July) and closing in on the now quickly declining levels of diesel powertrains. At this pace, we are poised to witness a historic shift soon, when plug-ins will overtake diesels for the first time, perhaps as early as December. So which models are responsible for September’s unprecedented performance? Let’s find out in the monthly Top 10 BEV chart below. 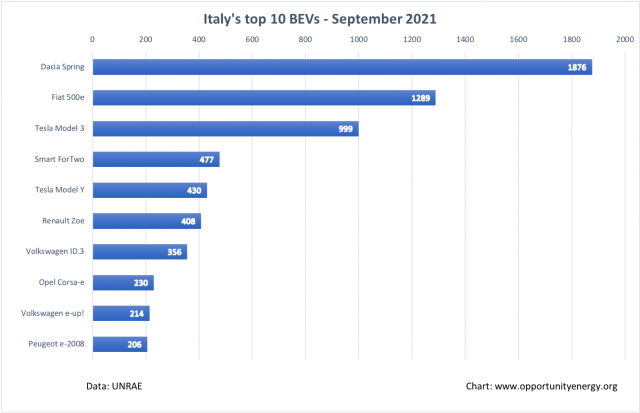 Perhaps overdue, but we finally see the new Dacia Spring taking Italy’s market by storm with an all-time record for any single BEV model: 1,876 monthly registrations. The Romanian mini made its first appearance in June, and it now comes back with a bang overtaking market-leading Fiat 500e, which has to settle for second place with a still outstanding 1,289 units (own second-best monthly result after December 2020). Will the Spring be the new queen of this minicar-loving European market? If they can make enough of them, this will easily be the case. Fiat is forewarned!

A strong Tesla Model 3 scores 999 units to complete the September podium, its own second-best showing to date. The American D-segment BEV is a consistent outlier in this A- and B-segment-loving market, and has a strong chance to consolidate this position in the final year’s rankings, as we will see in a separate update. Given the current waiting times for deliveries and the imminent start of production at Tesla’s Berlin Gigafactory, no doubt we will see Model 3 growing even further in the coming months. 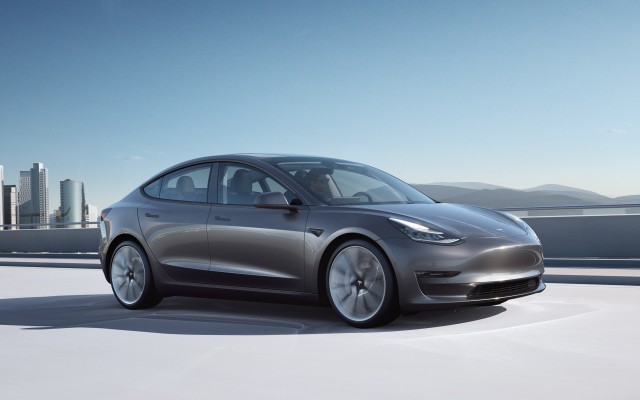 Out of the podium, Smart ForTwo follows a distant fourth with 477 registrations – still among Italy’s super-favourite mini BEVs. It’s the fifth position, however, that we are most interested in: Tesla Model Y lands with its very first batch of 430 units and opens a new era which will likely see a consistent presence of two Teslas in the Top 10. Will the popular crossover BEV match or improve on Model 3′s success? It would seem a sure bet but its higher price tag makes for a tough challenge in this market, particularly now that competing, competitive full-electric SUVs are a reality.

The lower half of the chart is populated by a fairly standard group. Renault Zoe, once queen of Europe, trails Model Y in sixth place with 408 registrations, followed by VW ID.3, seventh with 356 units. The German BEV is now consistently among Italy’s top 10 models on a monthly basis, however not as successfully as in other European countries, where it usually challenges Model 3 in the top spots. Opel Corsa-e, VW e-up! and Peugeot e-2008 – with over 200 units each – close this hot Q3-end chart.

Things are starting to move fast in Europe and Italy alike. The exponential growth of electric mobility is showing its daring face to shocked mainstream media as BEVs reach the tipping point, while ICE sales continue declining at a remarkable pace. Rising fossil fuel prices will only speed up the process, as we head towards 2022, which will be full of electric surprises and fossil failures.