Electric Cars In US Listed From Most To Least Efficient

All the currently available all-electric models (and multiple upcoming ones) listed by EPA efficiency rating.

Let's take a look at the comparison of EPA energy consumption for all-electric cars currently available in the U.S., (and some upcoming models) for which we have data.

The list includes dozens of cars, including the latest high-profile ones like the Lucid Air and Rivian R1T/Rivian R1S.

We must note however that it's just a general comparison (the only consistent one that we have for the entire market), and in some cases the results might be different than real-world tests (especially Porsche Taycan/Porsche Taycan Cross Turismo).

The most efficient electric car (and overall, regardless of the powertrain) is the entry-level Tesla Model 3 Standard Range Plus (RWD). Its efficiency in the EPA Combined cycle is 237 Wh/mi (147 Wh/km). On the highway, it's 253 Wh/mi (157 Wh/km).

The second is the Tesla Model 3 Long Range AWD at 251 Wh/mi (156 Wh/km). A noticeable difference of almost 6% is a result of a bigger battery and an dditional front motor that makes the vehicle heavier.

The third best overall is the Hyundai IONIQ Electric at 253 Wh/mi (157 Wh/km), which continues to be one of the most efficient cars for a few years now. However, we must remember that it's not a large car, and it has a relatively small battery (38.3 kWh).

The Lucid Air Grand Touring with 19" wheels comes right behind with 257 Wh/mi (160 Wh/km), which is amazing considering its size, battery capacity, range and performance. For comparison, the Tesla Model S Long Range AWD (also 19" wheel) is over 9% behind at 281 Wh/mi (175 Wh/km).

The Tesla Model Y Long Range AWD is fifth as the most efficient crossover/SUV type, at 270 Wh/mi (168 Wh/km).

One thing that we would like to point out is the Rivian R1T pickup at 481 Wh/mi (299 Wh/km) and Rivian R1S SUV at 488 Wh/mi (303 Wh/km). Those two are basically the biggest electron guzzlers on the market right now. Not because they are particularly bad, but just large, with huge battery packs (about 135 kWh), four individual traction motors and equipped with large wheels. Energy-wise, they are probably still at least three times more efficient than conventional models in their class.

In the not too far future, we will see up to around 200 kWh battery pack in the largest types of vehicles. On the small car segment (below Tesla Model 3), at some point, we should see results of around 200 Wh/mi (124 Wh/km). 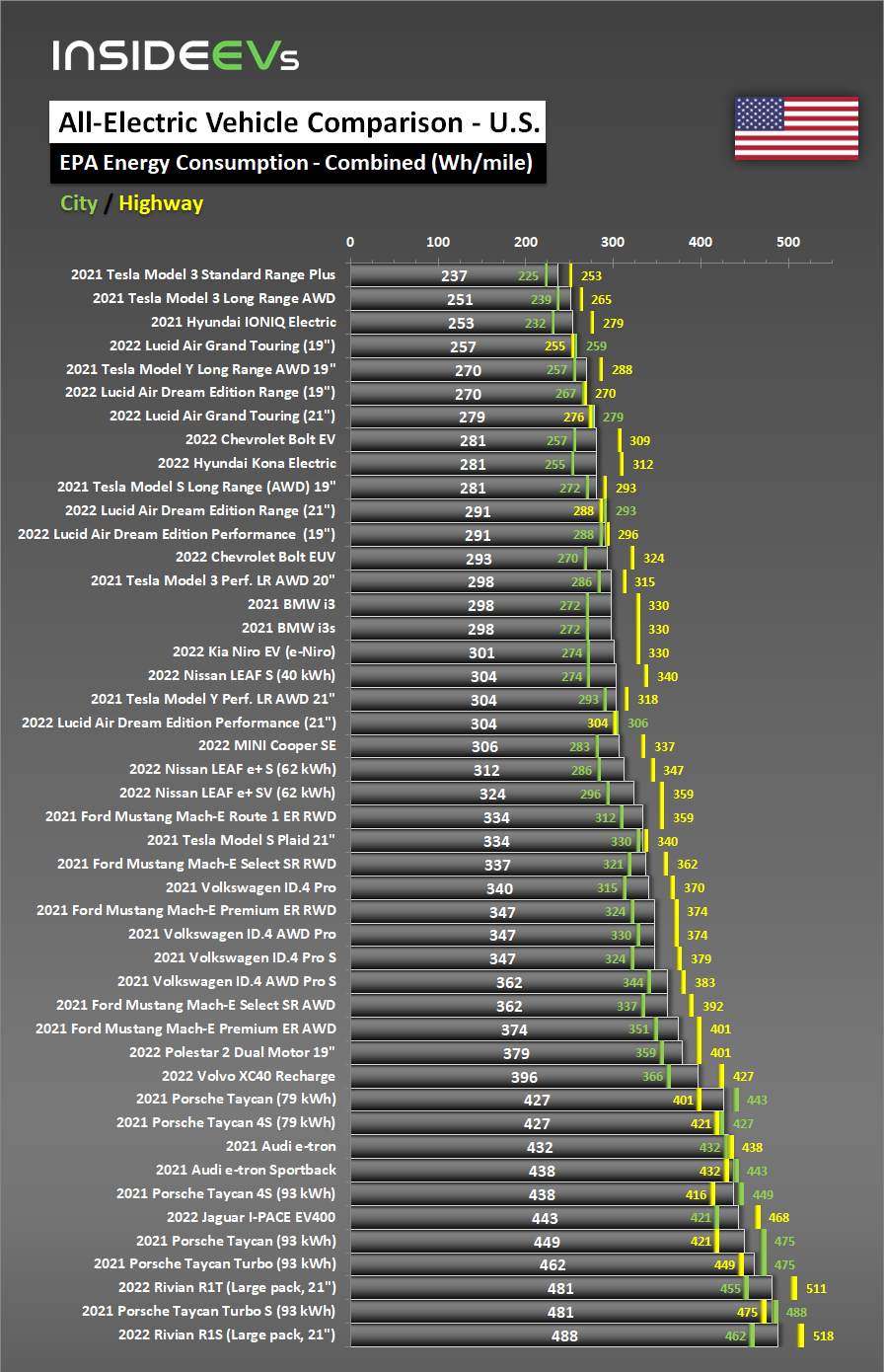