It is estimated to be equivalent to 85 mpg according to the Union of Concerned Scientists (UCS).

How clean an electric vehicle is we already know is heavily dependent on how the power used to charge it is produced. We also know that even in countries whose electricity generation is not the cleanest, an EV will still be responsible for fewer emissions - according to the Union of Concerned Scientists (UCS), the new Ford F-150 Lightning electric truck is about as clean as an ICE truck that returns 85 mpg (this only applies to California, though).

The concept of MPGe, which stands for miles per gallon-equivalent, is not new and it was thought up to give people a means to compare their electric vehicle to an ICE vehicle and roughly gauge how much cleaner it is. And this is what UCS is referring to here, putting the F-150 Lightning in quite a positive light compared to gas-burning F-150 variants.

For reference, the UCS rates a brand new 2021 Tesla Model 3 Standard Range+ (also driven in California) as using the equivalent of 177 mpg, or about one fifth of what the average car in America uses. Talking about the difference between a Lightning and an ICE version of the truck, David Reichmuth, senior engineer for the UCS Clean Transportation Program, explains that

For over 70 percent of the population in the US, driving the electric version of this vehicle should produce less than half the global warming emissions of the gasoline model.

The Ford F-150 Lightning will produce fewer emissions than the gasoline-powered F-150 while driving, even on the dirtiest electric grids in the US. And on the cleanest grids, the electric pickup will likely be responsible for less than a quarter of the global warming emissions of the gasoline truck. 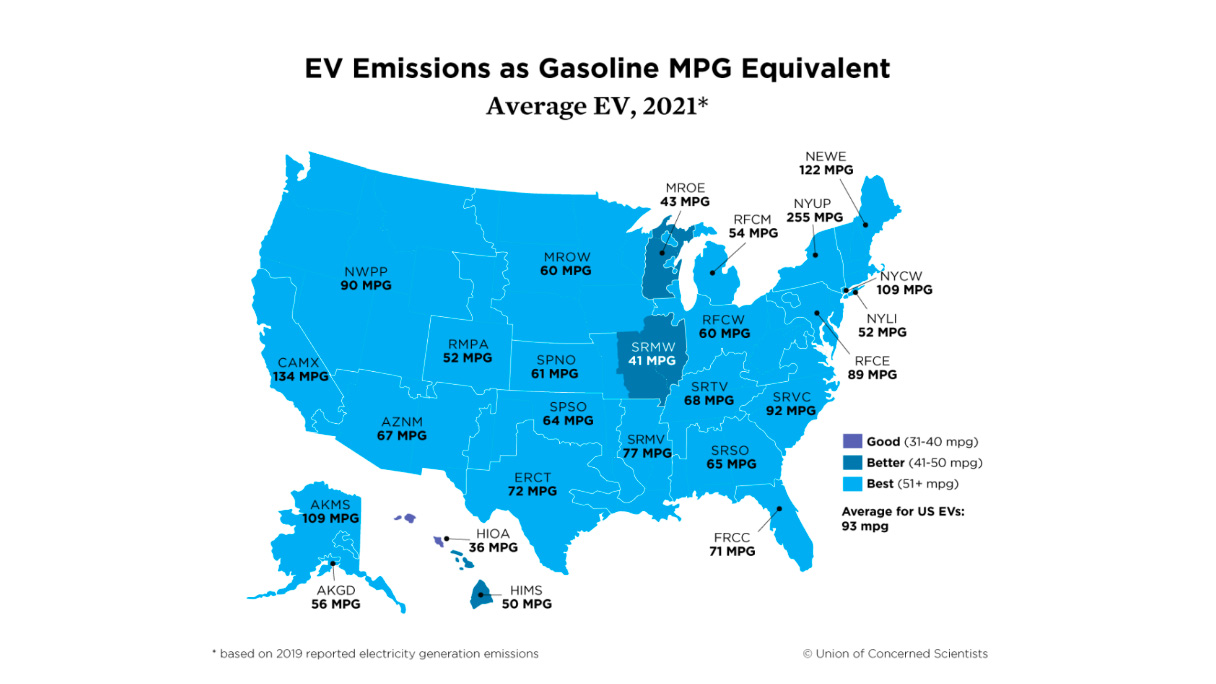 He also goes into more detail about how and why EVs are cleaner to run than ICE vehicles in the lengthy, well-written post linked as the source below. He also points out which US states produce the dirtiest electricity and where running an EV is cleanest.

More on the F-150 Lightning