When Ford announced that the Mach-E was going to be a part of the Mustang family, it irritated many people because not only is it an SUV, it's an EV, the opposite of a Mustang pony car.

Now, according to a document obtained by Car and Driver, the F-150 EV will carry the Lightning name. For those that don’t remember, the previous Lighting models were street/sport trucks. Street/Sport trucks are normally single cab trucks with powerful engines, large wheels, and low-profile tires. Something the upcoming F-150 electric pickup truck won’t feature.

It of course makes sense why Ford went with the electrifying Lighting name, but this time, SVT (Special Vehicle Team) won’t be in front of it. Also, Ford was never going to bring back a Lightning sport truck, so why not reuse the name.

The first F-150 SVT Lightning graced us with its presence for the 1993 model year. The single cab truck packs an upgraded version of Ford’s 5.8-liter V-8 that produced 240 horsepower and 340 lb-ft of torque. It's backed by a beefed-up four-speed automatic transmission.

The second-generation SVT Lighting was a big improvement. It’s powered by a supercharged 5.4-liter V-8 that cranks out 360 hp and 440 lb-ft. An upgraded version of the four-speed automatic was the only transmission choice. In 2001, power was increased to 380 hp and 450 lb-ft.

As for the upcoming F-150 Lightning electric truck, we still don’t know much about it. The Blue Oval is keeping that information close to its chest until the EV’s reveal late this year. At that time we should learn battery pack size, power, range, and other important information. 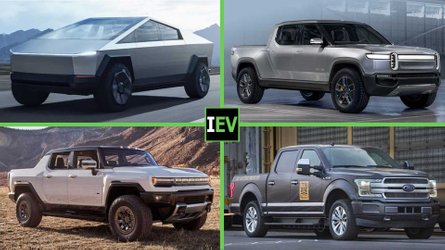 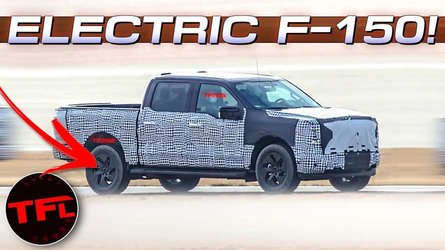 Where Are The Electric Pickup Trucks? This Video Sorts It Out

What we do know is that it will feature a large light bar that spans the grille and production should start in the first quarter of 2022 at Ford’s Rogue Complex in Dearborn, Michigan. Ford claims the electric truck will have a dual-motor layout and will be the most powerful F-150 ever.

Source: Motor1 via Car and Driver