Revealed: CyberLandr Is A Truck Camper For The Tesla Cybertruck

A kitchen, living room, office, bathroom, and bedroom all in one tiny package that fits in the Cybertruck's vault.

The Tesla Cybertruck will be in the hands of reservation holders late this year or early next year. With hundreds of thousands of people already plopping down a deposit for the electric truck, aftermarket companies are quickly working on Cybertruck gear and accessories. Many owners will be using the pickup truck for camping, fishing, and other outdoor activities. Towing a travel trailer is one way owners will explore the outdoors, but what if you don’t want to lose driving range or maneuverability? Well, a product developed by a company called CyberLandr might be the solution.

The CyberLandr is a truck camper, but unlike any in the world – just like the Cybertruck it’s built for. It fits in the Cybertruck’s vault (Tesla talk for bed), which is 6.5 feet in length. But unlike regular bed campers, the CyberLandr isn’t always up and seen; it’s actually collapsible and can completely retract under the vault’s powered cover. When it raises up in a telescopic sort of way, it appears to double the height of the truck at full staff.

The camper extends to the edge of the lowered tailgate and has retractable stairs that lead to a sliding (upward) door. There is also a retractable solar roof that extends beyond the edge of the camper, providing some shade for the entrance area and also generating 500 watts of power. According to the company: “Like CyberTruck, CyberLandr has no plans to include exterior door handles. The door will open when an authorized person puts their foot on the steps or uses the app to open the door.”

Inside, the Cyberlandr reminds me of a tiny home with lots of windows. The main compartment faces the front of the truck and can be used as a kitchen, office, living room, and bedroom. For kitchen use, it has a large sink, automatic open and close drawers, a heated floor, a touchless and voice-controlled faucet, an invisible induction stovetop, a compressor fridge, and a five square foot porcelain countertop. You can see how the sink operates in the video at the bottom.

The main compartment also has two free-standing chairs with pivoting tables for office work, eating, or entertainment. There is also a 32-inch wall-mounted TV for entertainment or to use as a second monitor for work. Internet connectivity is done through an included StarLink satellite dish that provides high-speed internet virtually anywhere (except Antarctica) for things like video conferences or for streaming movies. Wi-Fi is included too and allows for Wi-Fi calling in case your cell phone has no service.

The two chairs can converted into a queen-size bed for sleeping. When converted into a bed, the bed lies at counter height, allowing two children or an adult to sleep underneath. The chairs can even be taken outside. Lighting and climate are voice and/or app-controlled. There is also an alarm system with 360-degree surveillance and motion detectors for nighttime security.

The bathroom is located behind the main compartment, basically sitting on the tailgate. It features a recirculating shower with a four-stage filter that allows for longer showers. The fresh water tank will go in the Cybertruck's under-bed "trunk" space and effectively equal 40 gallons of capacity when used with the water recirculation system. The floor is one large porcelain tile that’s heated and there is a compact sink that folds. Since there isn’t a blackwater tank, the toilet is a dry-flush unit with a self-cleaning bowl. See how the shower works in the video at the bottom.

Since the CyberLandr collapses into the vault, there is of course no air resistance or drag, but it does have some mass. The dry weight is 1,200 pounds and the wet weight adds another 160 pounds (Cybertruck's max payload is 3,500 lbs). The company claims the added weight reduces the Cybertruck’s driving range by only five percent. The CyberLandr carries no power system, instead connecting to the Cybertruck and using up to 20 kWh of its massive battery back. The CyberLandr gives back, though, with 500 watts of solar panels sending juice back into the Cybertruck's batteries.

With the Cybertruck's production less than a year away, the company is quickly workly towards the final design but won't have one until the Cybertruck's final design is ready and Tesla releases the truck's final dimensions. The CyberLandr will be built close to where the Cybertruck will be manufactured in Austin, Texas (Gigafactory Texas). The camper company hopes that one day customers can order the two together and have the CyberLandr already installed at delivery. We don't have the details yet, but the company says installation and removal of the CyberLander will be easy.

The CyberLandr will cost $49,995 minus the launch promotion discount of $5,000. The length of the promotion isn’t mentioned. You can reserve one now with just a $100 deposit. Interestingly, a $5,000 deposit will get you towards the front of the delivery line and $10,000 off MSRP, but there are only 20 slots available. Check out Cyberlandr.com for more information.

According to the company, “Fulfillment priority is based on down payment amount and order date. However, we will work diligently to have your CyberLandr ready when your CyberTruck order is fulfilled.”

What Do You All Think?

There are lots of questions to be answered, and CyberLandr will release more information soon. No, this camper is not for everyone, but many will purchase it because it’s extremely innovative, just like the Cybertruck. The CyberLandr is a great option for those who don’t want a large travel trailer, and the fact that it can be used as a mobile office or as a hotel on the go will be very convenient for some. Another benefit is not having to haul around a power generator or being forced to find a power outlet at camping spots. And the best part is how it stores itself completely away, allowing owners to go places a traditional truck camper normally can't go, like rugged off-road trails or drive-thru lanes. 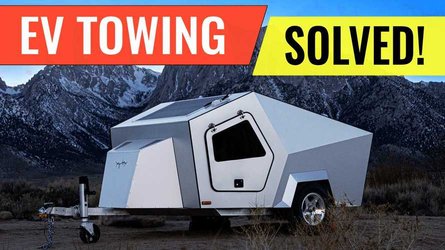 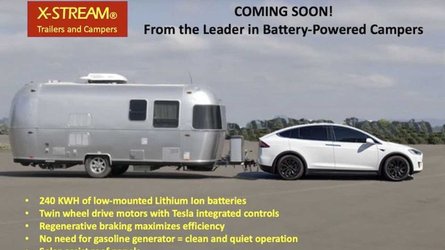 This Camper With 240-kWh Battery, Twin Motors Is An Electric Car Owner's Dream