US: Tesla Connectors To Be Integrated Into EVgo Charging Stations

EVgo chargers with integrated Tesla connectors will be incorporated into the Tesla navigation system.

EVgo, one of the largest EV fast-charging networks in the U.S., announced bold news today about the expansion of its offer for Tesla drivers through the integration of Tesla's proprietary connectors across its network.

The plan is to add more than 600 integrated Tesla connectors in 2021, including more than 400 at the existing EVgo sites and an additional 200 at new stations, scheduled for installation this year.

This is one of the biggest bits of news in the charging business because Tesla is focused on building its own Supercharging network. We guess that Tesla was very interested in the addition of hundreds of EVgo points because of the outstanding locations of those sites.

The power output of many of those sites is not especially high like 50 kW (the new ones are higher power), which also hints that the locations were the crucial advantage. Over time, EVgo can also increase the power depending on needs.

Tesla drivers will no longer need a Tesla-CHAdeMO adapter to charge at EVgo.

It's definitely big success also for EVgo, because Tesla's fleet is the largest EV fleet in the country. That means a huge boost to revenues and pride in becoming Tesla's partner.

"Today, Tesla represents as much as 80% of the U.S. market for EVs and its drivers, like all EV drivers, need convenient, reliable options to charge. EVgo’s strategic and convenient locations in grocery stores and retail outlets across the country meet that need. And now, EVgo’s increased footprint with hundreds of additional integrated Tesla connectors mean Tesla drivers can charge without the need for an adaptor."

"EVgo’s site host partners, including The Save Mart Companies, Sheetz, and shopping malls across the country, see significant value in offering easy access to fast charging right outside their stores."

Tesla will incorporate EVgo chargers with Tesla-compatible connector in its navigation system. According to the press release, EVgo will become the only third-party fast-charging network that will appear in the navigation system. Will other networks join later? We don't know.

For EVgo it means also that most of its stations will be able to handle all of the electric cars on the market:

"This will further EVgo’s reach as the only EV charging platform that is both 100% renewable electricity powered and capable of charging all three fast charging standards (CHAdeMO, SAE Combo or CCS, and Tesla) without the need of a separate adaptor."

The first stations were retrofitted with Tesla connectors quite some time ago (December 2019), but as we can see, it took more than a year to hammer out a business deal:

The EVgo stations probably will not be as easy to use as the Tesla Supercharging network. Besides plugging in, the driver will have to start the session using the EVgo app/card/or credit card.

“EVgo’s expansion of integrated Tesla connectors underscores our commitment to delivering convenient and reliable fast charging to all EV drivers. EV drivers seek efficiency and convenience in how they charge their vehicles, including the ability to shop while they charge. Today’s exciting announcement will make it even easier for Tesla drivers to top up while they grocery shop and run other errands, while driving greater utilization across our growing charging network.”

The EVgo network currently consists of more than 800 fast-charging stations in more than 67 metropolitan areas across 34 states. The number of registered customers exceeded 220,000. 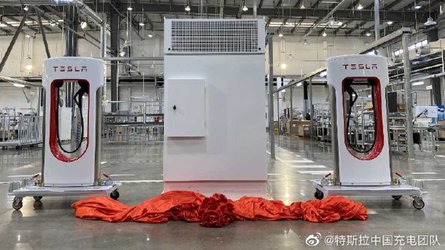 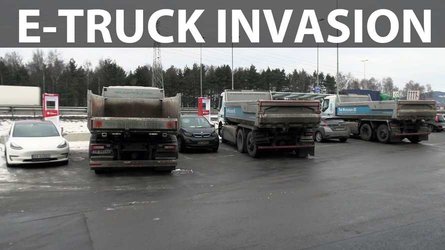 Electric Trucks Take Over Fast Charging Station
By: Mark Kane
++
Got a tip for us? Email: tips@insideevs.com