Rivian Van For Amazon Caught Testing In White With Camouflage 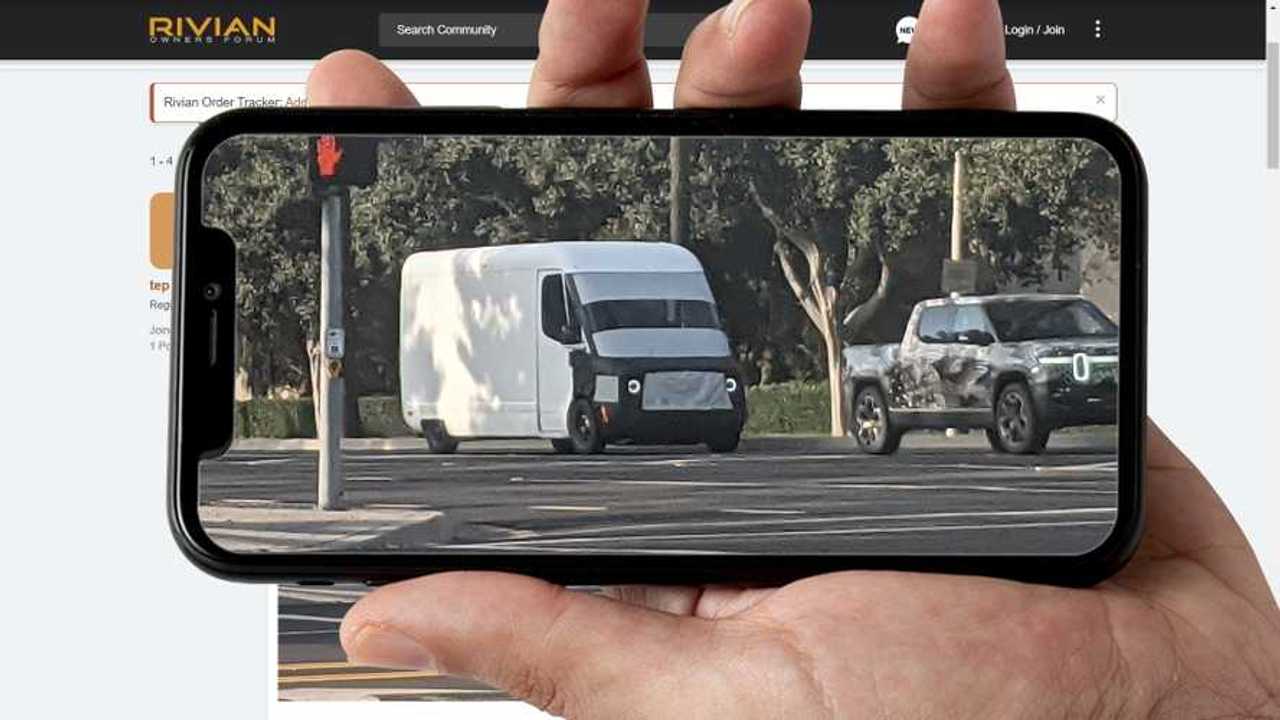 A Rivian Owners Forum member saw it escorted by Rivian R1T prototypes: three of them!

While many may think that people are anxious about getting Rivian’s electric pickup truck, another popular product for the brand will probably be the electric van. It is currently under development, and images of its tests are multiplying on the internet. The latest one came from a Rivian Owners Forum member who photographed it in Irvine, California – and this one seems to be special.

First of all, it is painted white. It can be an effort to make it go unnoticed among all the other white vans we have in cities. We prefer to think it is a way to show new potential buyers, such as hospitals in need of moving ICUs and campers looking for an all-electric campervan to see how it looks in the right color, the most popular one in the world for the 10th year in a row.

For the first time, the van was photographed with camouflage at the front and rear. While nothing protects its sides, the rear and the front of the electric van are completely covered. If you are wondering why – since the van design is not a mystery for a long time – the rear may help answer that. It seems to be slightly different from what we have seen so far.

In one of the pictures shared by Tep, we can see that the taillights seem to be much smaller than the ones photographed by The Kilowatts back on November 16. Those early taillights were more like a light bar in the format of an inverted U that framed all the van's rear.

The new pictures show that the white van has what seems to be more conventional lights, limited to a small part of each side of the rear. The disguise lets only that little part without protection.

That leads to interesting conclusions: either the van photographed in November was not the real deal, or Amazon vans will be just one of the versions of this delivery vehicle Rivian intends to produce.

The first hypothesis is not unlikely because the van had Amazon stickers and seemed like a finished vehicle. If that were the case, it would be already for sale. These pictures show that the van was taking the highway, followed by three R1T vehicles. Our guess is that they will work as support vehicles for the van testing.

Rivian Delivery Truck For Amazon Is Photographed Driving Without Camo
⠀

We are more inclined about the second hypothesis, though. Amazon has indeed ordered 100,000 units of this vehicle, but it is doubtful that Rivian does not intend to sell it to anyone else. The front disguise would be to hide that the badge on the nose is not from Amazon but Rivian.

At this point, we have very little information about the future Rivian van, including what the company intends to call it. The Rivian van is supposed to use the same platform the R1T and the R1S have, which would give it more than 400 miles of range with its biggest battery pack. If you consider delivery vans work mostly in urban cycles, that range could be even higher if the cargo is not too heavy.

Whatever the answers are, the new electric van seems to be on a good way toward production. Expect to hear more about it in 2021.