There's Now More Than One Million CHAdeMO Vehicles In The World

Half of that falls on the Nissan LEAF, which is already above 500,000.

The CHAdeMO Association announced recently that the number of plug-in vehicles that are equipped with the CHAdeMO DC charging inlet has reached one million, globally, as of October 2020.

That's a huge achievement for the Japanese global standard. The only other standard with a higher number of vehicles deployed (over two million) is the Chinese GB/T, but it's used almost entirely in China.

Tesla sold more than 1 million EVs, but is inconsistent in terms of charging inlets (different in the various parts of the world or even in various models). The CCS Combo, on the other hand, exists in two different physical versions - CC1 and CC2.

If CHAdeMO would add Tesla cars that are compatible through the CHAdeMO adapter, it would be at two million, but this is just a theory as not many have the adapters: 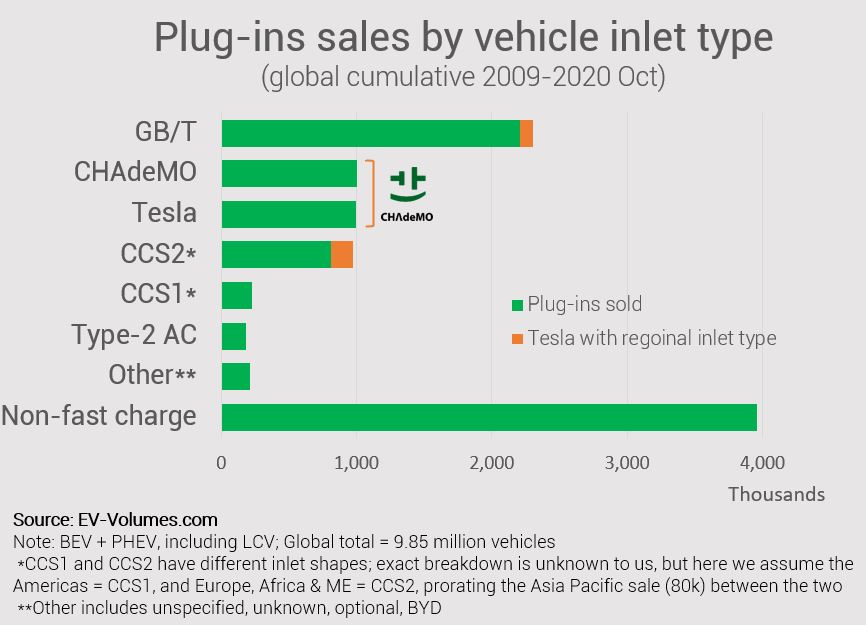 The core members of the CHAdeMO fleet are electric Nissan and Mitsubishi cars:

The strong point of the CHAdeMO standard is that it's the same everywhere you go: "CHAdeMO inlet shape remains the same wherever you go, which makes transcontinental moves easier for those who are up for it!".

The future of CHAdeMO

The future of the CHAdeMO standard is not clear, as the CHAdeMO Association is trying to develop a new standard with China, under the ChaoJi project. It will be a new, more capable solution (mostly for Asia we assume), that will however require an adapter for older CHAdeMO cars.

Nissan is expected to retire from CHAdeMO in North America and Europe, so we guess that Mitsubishi (controlled by Nissan) will do the same. As Tesla switched to the CCS2 in Model 3 in Europe, Europe is set. North America has CC1 and Tesla proprietary standard, while CHAdeMO is gradually fading.

US: Number Of CCS Chargers Outnumber CHAdeMO By 28%
CHAdeMO Association Introduces CHAdeMO 3.0 Protocol (ChaoJi)
By: Mark Kane
++
++
Got a tip for us? Email: tips@insideevs.com