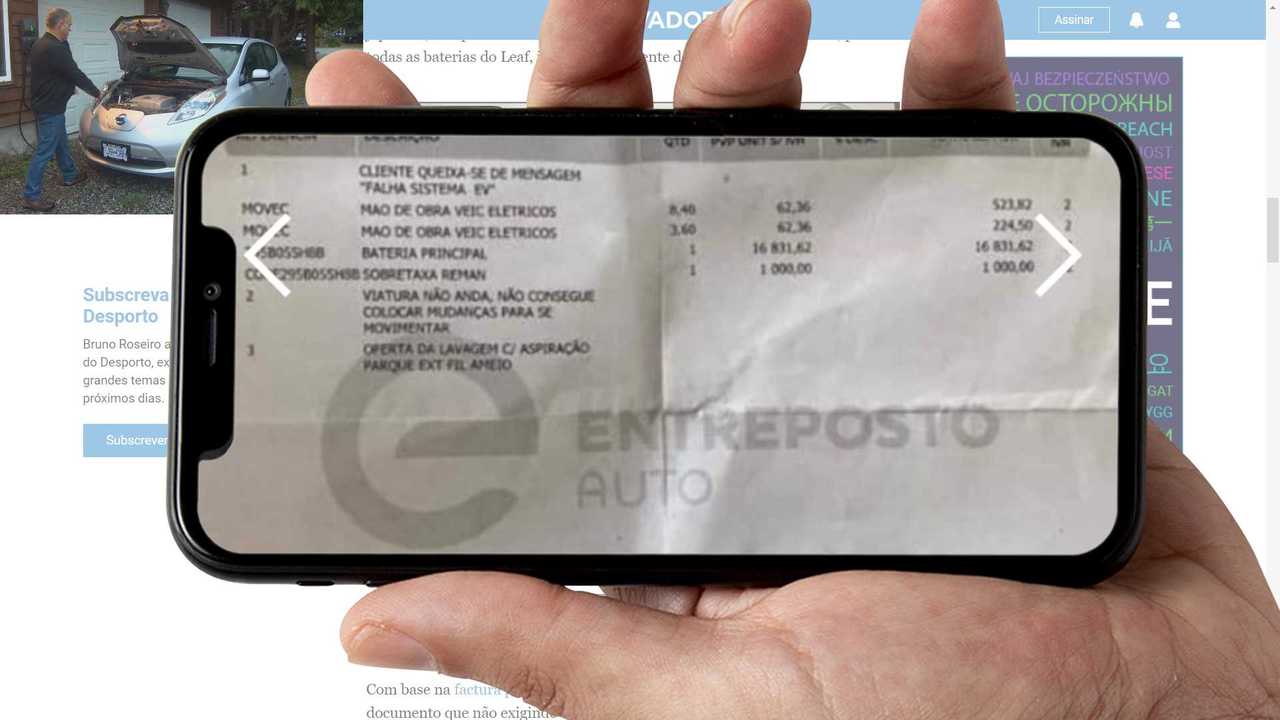 If that’s the case, why is Nissan charging a Canadian Leaf owner C$11,533 for a new 24 kWh battery pack?

On October 28, we told you about Clayton Brander’s struggle to get a battery pack for his 2013 Nissan Leaf. Soon after that, we managed to talk to him about the whole situation. By coincidence, Nissan was again in the Portuguese media with another absurd price for battery packs, and it revealed it has two different values for them. Yet, Brander would only be able to have a new 24-kWh battery pack for C$11,533, more than his car costs.

In our first article about Brander’s story, we said the global database for Nissan Leaf batteries did not have any companies listed in Canada, but that was wrong.

Sal Cameli warned us there are four of them there. To find them, you have to zoom in a lot. Fortunately, Brander already knew about that. Sadly, none of the companies close to him were able to solve the situation.

“Scott, down at Precision Auto Service, sounds like a pretty knowledgeable guy but he too has a hard time getting batteries because they're snapped up by the off-grid community for their solar panels. When I spoke to him, he had one 24-kW battery at 80 percent capacity and the cost was $7,000 plus taxes. The demand for the batteries drives the price up.”

This is where Brander’s story meets with an article at Observador, a Portuguese newspaper that went after another story of very high prices for the Leaf battery pack.

Nissan told Observador that this was probably a mistake the dealership made and that there are two prices for these battery packs. These €16,831.62 are the effective cost for the 40-kWh unit. With the 23-percent tax called IVA, it would reach €20,700. Leaf customers would have a subsidy to pay €7,000 instead of €16,831.62. With the tax, the price would be €8,610, regardless of its capacity – which only makes sense if the company wants to kill the smaller ones.

The full price would only be charged to people that do not have a Leaf but are willing to buy the battery pack. These customers would be using them as stationery packs. If Nissan made a profit from them, it could see this as a business opportunity. The fact that it believes there are better solutions for those applications shows it may lose money even charging the full price, which is a tragedy for keeping these EVs running.

Sandy Munro confirmed how much battery packs could cost back in February 2020. At the time, he said powertrain expenses represented 51 percent of the manufacturing costs of most EVs. Most of these costs came from battery packs.

Back to Brander’s car, the C$11,533 would represent €7,506.24, or a price closer to the subsidized value than to the effective battery pack value, at least in what relates to the 40-kWh unit. Brander wants the 24-kWh battery pack, which should be much cheaper. As we already told you, it isn’t.

If he decided to buy a brand new battery pack, his car’s depreciation along these seven years would make it a terrible financial decision. According to KBB.ca, the average price for his 2013 Leaf in a dealer would be C$11,366, or C$ 167 less than a new 24-kWh battery pack alone.

This Canadian Leaf owner lives in Powell River, British Columbia, which he defines as “a small, isolated community” where you “can't travel far.” It is only accessible by ferry or plane. This is why his Leaf, even with a diminished capacity when he bought it, seemed like a good deal.

Right after purchase, Brander’s Leaf had a 120-km (75-mile) range. We wrote that the range fell to 80 km (50 miles), but the Canadian customer said it was even lower than that.

“Quite literally, the furthest I can drive from my house is approximately 45 km before I run into water.”

In other words, he did not think his Leaf would lose range so fast, which seems to be a common issue with air-cooled battery packs.

If Nissan were to live up to its promise that the Leaf is environmentally friendly, it would have made its battery pack live longer than the car body, which is not currently happening. When capacity gets so low you have to think about getting a battery pack replacement, you either find a way to live with that – charging multiple times a day – get a used battery pack in good conditions, or dump your car in a junkyard. Brander is already looking for the second option.

“I can get the same battery at EV Rides in Portland, Oregon for less than half the cost, after taking the exchange rate into consideration, and there are no taxes in Oregon.”

Nissan Is Charging $35,000 For LEAF Batteries In The Virgin Islands

The bad news is that all Leaf owners are probably aware of that at this point, as well as people willing to live off-grid. They will compete for these battery packs, which will make them even more expensive.

If you want to look on the positive side, this can be a great opportunity for aftermarket companies to recover these Leaf battery packs for lower prices – if that is even possible. If you can't help to look on the negative one, we’ll probably see many of these early EVs turn into scrap while they could still be running if their battery packs did not die so soon.