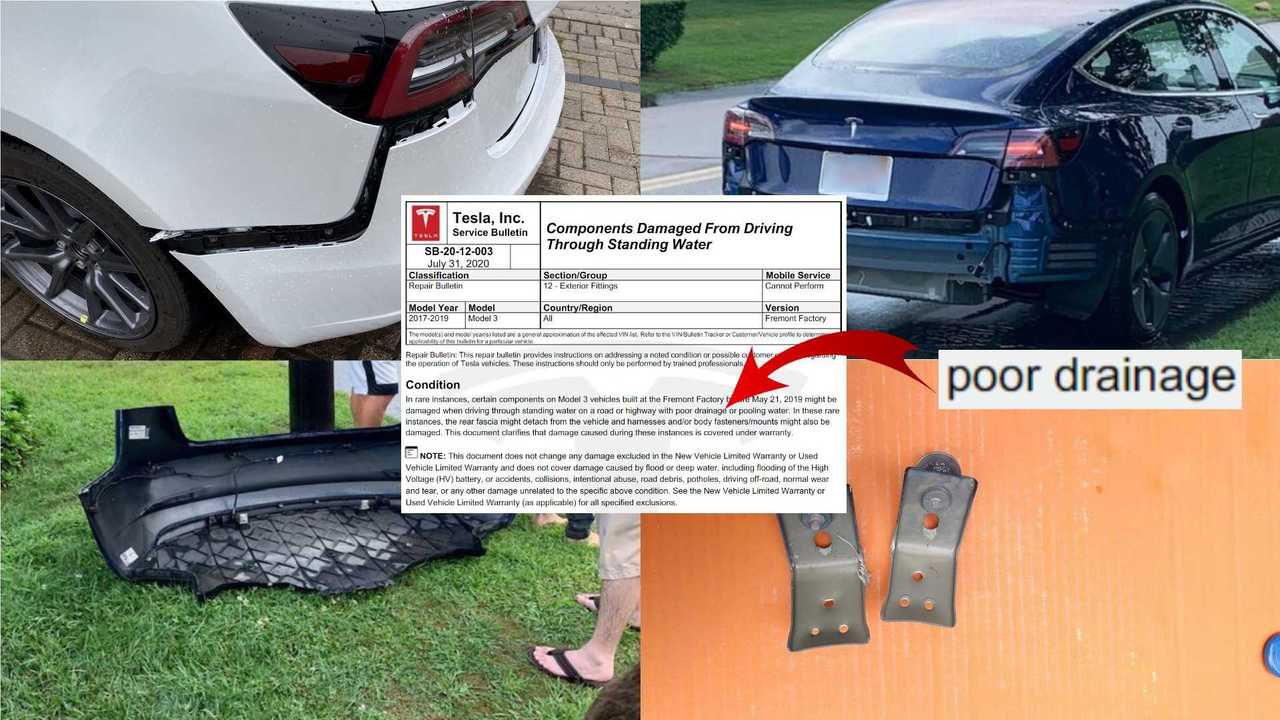 Tow hitch access cutout could have solved the matter, but did it? The answer is no.

InsideEVs reported the first case of a Tesla Model 3 losing its rear bumper on rainy days back on August 13, 2018. Rithesh Nair tweeted that he had his car for half an hour and was bringing it back home when the bumper came off. More cases followed until Tesla decided to recognize the Model 3’s rear bumper had a design flaw in a service bulletin. Well, sort of.

The tone of the document obtained by Electrek is still pretty defensive and unapologetic. It states that those issues occur “in rare instances,” which is not accurate. It is more common than it should be.

Something else that caught our attention is that the Tesla Service Bulletin SB-20-12-003, published on July 31, 2020, does not inform what is wrong with the Model 3’s rear bumpers. Instead, it blames roads with “poor drainage or pooling water” for that when the “poor drainage” is actually on the rear bumper.

Tesla only says that “the rear fascia might detach from the vehicle and harnesses and/or body fasteners/mounts might also be damaged.” This is what we have seen in all the cases we have reported ever since.

Another crucial part of the document states “that damage caused during these instances is covered under warranty.” If the issue is with the roads, as the service bulletin implies, why is Tesla willing to pay for the repairs?

The document includes a note stating there is no change for “damage excluded in the New Vehicle Limited Warranty or Used Vehicle Limited Warranty.” That’s understandable while it lists “damage caused by flood or deep water, including flooding of the High Voltage (HV) battery, or accidents, collisions, intentional abuse, road debris, potholes,” and “driving off-road.” At this point, the document also mentions “normal wear and tear, or any other damage unrelated to the specific above condition.”

“Normal wear and tear” was the excuse given to most customers that had to pay for the rear bumper repairs. Tesla specifically denied engineering or design flaws to these clients when they asked it for the warranty repair.

The company also stated that all cars made until May 21, 2019, are included in this service bulletin. What changed? According to a Reddit thread, it was the tow hitch access cutout that was added to the rear bumper on that date. The user blake9410 not only pointed this out but also presented the Tesla page that shows it.

The problem is that we have at least one case in which the car was brand new. Luís Terceiro’s Model 3 was bought on May 29, 2020. It was a test drive car, but bought directly from Tesla and still manufactured in 2020. Theoretically, it would not be subject to the problem with the new tow hitch access cutout. Yet, you have already seen with your own eyes that it is. Terceiro is currently suing Tesla to get his $3,800 back.

If the issue was not solved, why is Tesla replacing the bumpers for new parts that will likely fall off again under heavy rain? Does it hope that few roads have "poor drainage or pooling water?" Is it too expensive to develop a rear bumper that would have proper drainage? If Tesla has to replace all these bumpers again, won't it cost more to the company?

We have tried to find the Tesla Service Bulletin at the NHTSA site but it is not there. Isn’t this considered a safety issue? Having such a big part falling off of a car should be a concern not only for the ones driving, who could be scared of the situation. It is also something drivers around that car may be affected by. Yet...

We are still trying to contact NHTSA regarding the glass roof recall-like inspection that Tesla is performing on the Model Y but received no reply so far. Here’s a second thing we would like to learn more about from the agency. Let’s hope it did not adopt Tesla’s strategy regarding the media.