Troy Bosman, Luís Terceiro, and Mr. B decided they had to speak up about their cases too.

Any article that exposes issues from Tesla gets apologists claiming it is irrelevant, regardless of what it is. The story would be an attempt to harm the company. As we already explained, it is the opposite: it is an effort to convince it to do the right thing. In the story about the rear bumper that flew off of a Model 3, the right thing is to pay for the damages under warranty. Tesla did it only for Logan Derouanna, but not for Troy Bosman, Luís Terceiro, and Mr. B.

These Tesla owners – some of them big supporters of the brand – only got in touch with InsideEVs because of the video posted by Derouanna. When they read it, they decided to share their stories about the same problem, which they heard from more than one Tesla Service Center that is a “known issue.” Here are their stories: 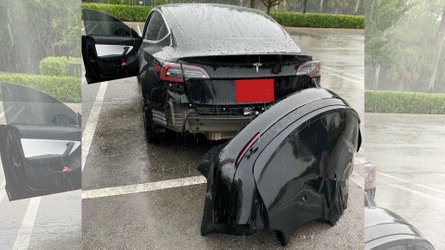 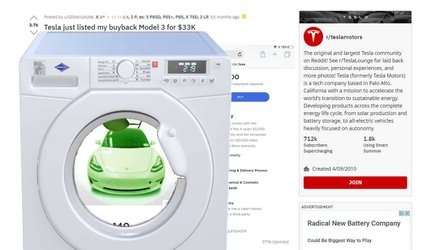 Tesla May Call Warranty Repairs Goodwill Due To Lemon Laundering

The first reader to get in touch with us was Bosman. He thanked us for the article and told us Tesla did not pay for the repairs.

“After the Tesla Service Center said they wouldn't fix it, I didn't pursue it any further. Honestly, getting a lawyer never crossed my mind. I never thought that was something I could afford anyway. I'm one of the people who did the ‘Tesla Stretch,’ purchasing a vehicle that would normally be out of my price range.”

“I was driving through a puddle that was about ankle deep when I heard a loud thud coming from the back of my car. When I looked out through my rear-view mirror, I could see my bumper laying on the road behind me. My friend, who was in another car driving in front of me, went through the same puddle without issue. I was able to get the parts that fell off my car home through the help of my friend and some people who were in the area at the time who loaned me their tools. The next day at home I assessed the damage and reattached the bumper fascia more securely.”

Bosman’s via Crucis started on August 19.

“On Monday, I contacted Tesla Service Center. They told me that it wouldn't be able to be fixed through mobile service and I would have to come into the service center or go to a body shop.

Through September and the first week of October, I went to a couple of body shops to see what they could do. One of them, Hollis Auto Body, in Ashland, MA, thought that it may be something that would be covered under warranty so they said they would contact the local Tesla Service Center and find out for me. Eventually, they did get back to me and told me that Tesla service told them it would be a warranty repair since it's a ‘known issue.’”

That sudden hope that Tesla would take care of the problem did not last.

“Unfortunately, that conversation happened over the phone so I don't have a record of it. Once they told me that it might be covered under warranty, I made an appointment on October 9 to bring my car to the Service Center on November 11. The next after that, they told me that they actually wouldn't be able to fix it, despite having ‘ordered all the parts.’”

Bosman’s Model 3 is still waiting for a proper repair.

“Since then, nothing has changed. The bumper fascia is being held on by one bolt and the plastic clips that didn't break when it fell off. It hasn't fallen off since, but I'm always a little worried that it will one day.”

As sometimes happen, Mr. B preferred to remain anonymous. Not because he works for Tesla, but instead because he is a very active member of the so-called Tesla community. He helps his Tesla Service Center organize owners’ gatherings, for example. Since the point is to help, not to cause him any sort of embarrassment, he became Mr. B.

Mr. B’s Model 3 was bought in May 2018, and it currently has around 30,000 miles on the odometer. Despite his excellent relationship with his local Service Center, he had to hear a “no.”

“They simply told me that it wasn't something Tesla would cover. They did not explicitly use the 'Act of God' wording, just a generalized statement about not covering damage done by the vehicle operator or something. I'd have to take it to a body shop because some brackets on the undercarriage (where the bumper cover and/or undercarriage covers attach to) had ripped.”

This is something that seems to happen with all the cars we have seen so far. When these brackets collapse, the bumper falls off, as the body shop Mr. B chose is well aware of.

“When the body shop called me, they actually said they read your story and watched that dashcam clip and thought, ‘This sounds like what happened to this car.’ They felt it was ridiculous and that any other car would have been fine.”

We spoke to Mr. B for almost a week. In his last message to us, he was going to pick up his car from the body shop. He was also making plans to bring more awareness into this apparent engineering flaw.

“I think this is getting more attention. Perhaps a compiled list of some data points regarding these incidents is good. We need data points like year or mfg date, miles, VIN or VIN-range, state it was owned and/or the incident occurred in, and what kind of conditions (actively raining/snowing/etc.). I suggested on another article that someone get ahold of you if they haven't already. I hope the other folks can provide the same type of info as above. I bet we are going to see a correlation of either VIN or Mfg Date, or both. Config will probably vary, depending upon whether or not Tesla actually fixed this issue on later models.”

Sadly, that was not true, as Luís Terceiro’s case proved. Terceiro, in Portuguese, means third. Ironically, he was the third Tesla owner to warn us about the bumper issue – so far.

Terceiro is a nurse, the sort of professional that deserves a lot more respect in these COVID-19 days. Or at least fewer concerns than the ones he already faces every day. On June 23, at 6:30 AM, his Tesla became another source of worry.

“I was driving to work in low traffic and heavy rain. I take two major highways to get to work (I-35 and President George w. Bush Turnpike tollway, both in Dallas, Texas). After parking my car, I saw that my rear bumper was hanging by one bolt on the left side. The whole bumper was dragging on the road for who knows how long!”

Terceiro immediately tried to make an appointment to get his car fixed. The only one available was on July 6.

“I looked for a number to call. At that point, all I wanted was to be able to drive my car until they could find a permanent solution. I could not find any number to talk to a person at Tesla. So I later contacted the sales team (who we bought the car from) at Legacy West, Plano Texas, about the issue. They said the Service Center was going to reach out to me directly the same day.”

The nurse went back to work and waited. He finished it by 3 PM.

“No one from Tesla reached out. I attempted to snap the bumper back in place. All I wanted was to be able to drive home and wait on an answer from Tesla. After many attempts, I was able to snap most of the right side back in place. I hoped if I drove really slow, I could make it home (14.5 miles away from work). After about driving 2 miles, the bumper completely came off my car onto the road. It almost hit the car behind me. I had to stop in the middle of traffic, pick up the bumper from the road, and shove it inside my car. Still no response from anyone at Tesla.”

At 3:31 PM, Terceiro received an email message for him to take his car to the Service Center as soon as he could.

“I arrived there at 3:45 PM. Nobody outside, no number to call. There was a QR code to check-in, but it was not readable by my phone. I emailed the store again so they could contact the service center. While we waited outside (it was raining lightly at that point) the SC employees saw us from inside but never came to check on what we needed.”

The technician showed up at 4 PM, and he told Terceiro they would investigate the issue and get back in touch with him. The nurse got a 2014 Model S as a loaner and was contacted the following day.

“Tesla said that I was driving at 100 mph when the bumper detached and that it happened because of my speed and it was not their responsibility. When I asked to see the records, they said I had to request that through their website. The SC reported that the camera footage was too blurry due to heavy rain.”

That’s a new one: a car that can reach 145 mph cannot do 100 mph because its rear bumper falls off. The issue is that Terceiro denies he was so fast.

“How I can drive 100 mph in heavy rain and live to tell the tale is beyond me. They also said the SC did not perform that kind of repair (contrary to what the SC manager said the day before). The car had to be sent to a Tesla authorized collision shop. Here is the kicker: they could not send my car there, either the body shop had to pick it up or I would have to drive there myself. The second kicker: they would only release my car once I returned the loaner since the incident was not Tesla’s fault!”

The burden of proving its accusation on Terceiro is on Tesla. The nurse filled the data request on the company’s website the same day. On June 25, Tesla denied access to it.

“It said that such data can only be released in California or The European Union. On July 10, after over $3,800 in expenses (repairs and rentals), I received my car.”

Can Tesla use the data from its clients against them? This is an interesting discussion, especially if these customers can opt-out of such control over something that does not belong to the company.

“When picking my car up from the collision center, the service advisor said they had another Model 3 with the same issue, and two days after they received my car they received another Model 3 with the same issue. Three Model 3s with a failed bumper in two weeks! During this whole process, we tweeted and private messaged Tesla on Twitter several times only to get absolutely no response.”

As you can see, our article put us in touch with three more cases. Terceiro alone learned about three more only at the collision center where he took his car. There are probably way more that we are not aware of.

What is clear is that the rear bumper issue has not been corrected and that it is more common than Tesla apologists are ready to admit. If the Model 3 had been tested as Philippe Chain wanted to do with the Model S, perhaps this would not have happened to all these customers. If Elon Musk asked us about this, we would tell him that this is something Tesla has to fix. We hope he realizes that by himself.