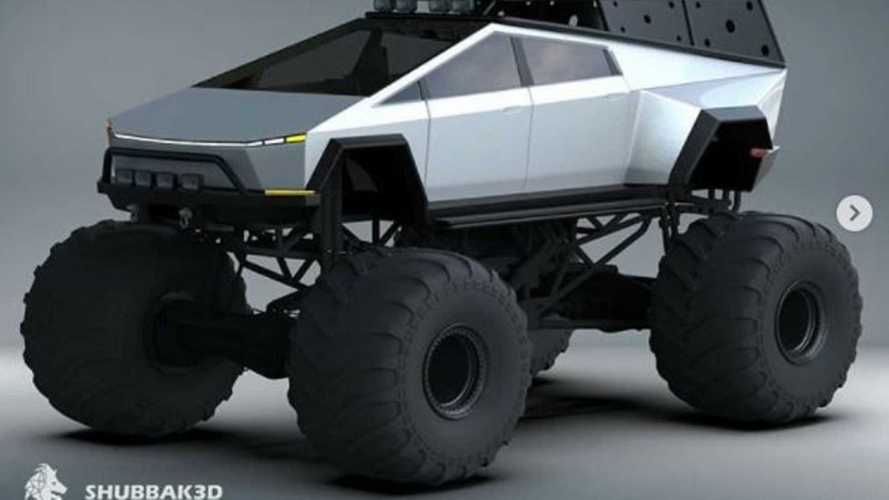 This version of the Cybertruck is an absolute beast.

Ever wonder what the Tesla Cybertruck would look like in monster truck form? Well, wonder no more as here it is thanks to a rendering on Instagram.

Before Tesla officially revealed the Cybertruck, InsideEVs had a render artist mock up a massive version of an electric pickup truck that we thought might be something like described by Elon Musk. Remember, Musk stated that the Cybertruck would look something like an armored personnel carrier:

“We are going to come out with the Tesla pickup truck, or we call it ‘Cybertruck.’ I mean, it looks like an armored personnel carrier from the future. It doesn’t look like a normal car. You may like it, you may not. I like it. It’s going to look like it came off a movie set. When it goes down the road. Like, ‘Whoa, What’s that thing?”

So the images below are what we came up with and we placed it next to a Ram truck for a size comparison:

And we even had one done in all black, mostly because you can order a Ram in all black and we thought why not give the Tesla truck a more sinister look.

As badass as those renders looked, this monster truck version of the Cybertruck looks equally as intimidating. The monster truck render comes to us via shubbak.3d on Instagram. Shubbak offers rendering services too.

As much as we like the mega truck look, we should point out that there are a few notable flaws. For one, what's the reason/use for the gas cans up top? To fill up a generator, perhaps? Secondly, that tiny tire up top would not fit this monster truck, so it too seems out of place.

However, the overall monster truck setup sure does look fitting with the Cybertruck body and we're rather certain that we'll see a real-life monster Cybertruck in the future. Or, at the very least, a Cybertruck with huge tires and a big lift kit.