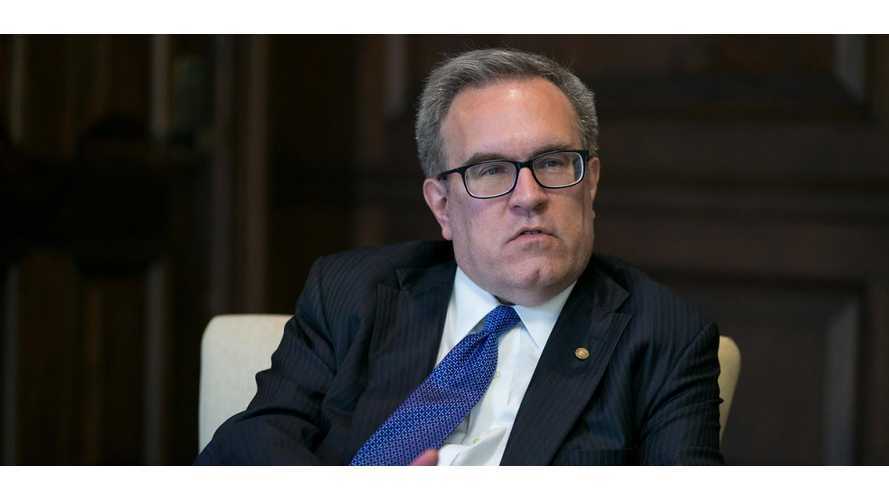 California just announced a goal to mandate zero-emission cars by 2035, but Wheeler isn't on board.

We really have to take another step back and ask exactly what is happening with our country. For years, the Environmental Protection Agency (EPA) has worked to protect the environment. It seems fitting based on the organization's name.

However, with the current administration, the EPA seems to almost barely exist, it has reversed many of the protections we've enjoyed over the years, and it's working to assure that the environment is not protected into the future.

As we recently shared, California has publicized a new plan to accelerate its efforts toward zero-emission vehicles. According to California Governor Gavin Newsom, the state plans to require that all new vehicles be zero-emission models starting in 2035.

U.S. EPA Chief Andrew Wheeler isn't on board with Newsom's plans. In fact, he says it "raises serious questions regarding its legality and practicality." Wheeler also believes it could have a negative impact on California's electric grid. The EPA chief cited numerous blackouts, as well as adjacent states' need for more power as some of the reasons behind his skepticism. He also encouraged Newsom to stop focusing on singular technologies. Wheeler continued:

"California’s record of rolling blackouts -- unprecedented in size and scope -- coupled with recent requests to neighboring states for power begs the question of how you expect to run an electric car fleet that will come with significant increases in electricity demand, when you can’t even keep the lights on today."

Interestingly, California actually set the blackouts into place during a few recent heatwaves. Apparently, gas plants dropped offline, and there wasn't enough wind to assist with energy production. However, the state also has grand plans to increase wind and solar power generation.

Sadly, the EPA isn't on board with wind and solar power either. President Trump is a self-proclaimed expert on wind power and says he has studied it better than anyone. He believes wind turbines kill birds and reduce property values. He's also imposed steep tariffs on solar panels. Meanwhile, Wheeler doesn't even try to validate CAFE rollback and he says EPA standards are "social engineering."

California accounts for 11 percent of all vehicles sold in the States. With its aggressive future plans, we could see a surge of electric cars on the road, which will lead to cleaner air. However, Wheeler and the Trump administration actively support fossil fuels, so they'll work to make it difficult for states like California to mandate progress. Last year, the EPA already made new rules banning California from requiring electric car sales, though the court hasn't come to a final decision.

It's important to note that with California's plan, people can certainly own gas-powered cars. The state is not going to confiscate vehicles. You'll also still be able to buy any used car you choose. However, the hope is, 15 years from now, the only new cars available for purchase in the state will be of the zero-emission variety.