Zeno's Paradox And The Perpetual Race To Catch Up With Tesla 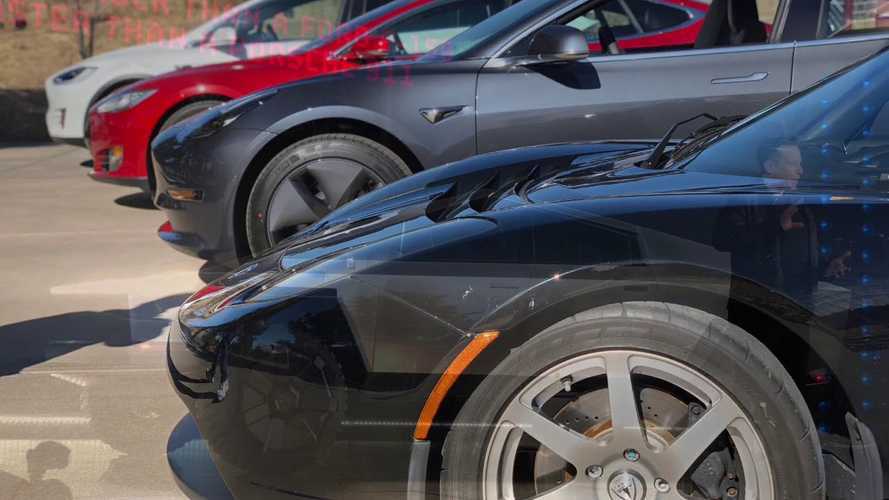 Tesla's head start is huge, and it grows quicker than other automakers are leaving the starting line.

Posted on EVANNEX on September 22, 2020 by Charles Morris

Even auto industry execs acknowledge that Tesla has a substantial lead over the legacy brands, not only in battery tech, but in connectivity, autonomy and EV manufacturing. Spurred by tightening emissions regulations in Europe, and by Tesla’s ominous inroads into their market share, traditional automakers are racing to catch up. However, there’s one little problem: Tesla isn’t standing still, so by the time they try to catch up, the California Crusaders have already moved on.

Gene Munster, writing for Loup Ventures, likens the situation to Zeno’s Paradox. The ancient Greek philosopher Zeno imagined a foot race between the mighty Achilles and a lowly tortoise. He proposes that, even though Achilles can run much faster than the tortoise, he can never overtake it, because he must first reach the tortoise’s original starting position, then reach the position to which the tortoise has advanced, and so on ad infinitum.

Of course, Zeno’s Paradox rests on a logical fallacy (in reality, Achilles and the tortoise are in constant motion, so the number of intermediate points they must pass through on the way to the finish line is irrelevant). Feel free to explore the philosophical and mathematical implications if you wish, but here we are concerned with the auto industry. The analogy might be more apt if we posited a particularly clever tortoise that had grasped some pertinent facts about the racecourse that Achilles had missed, and that was somehow able to increase its speed during the race (and an Achilles who had never wanted to be in the race at all).

Be that as it may, the analogy is a thought-provoking one. Like Achilles, Big Auto has enormous logistical advantages in its vast financial resources and economies of scale. However, like the tortoise, Tesla had a large head start. In 2003, when Tesla was founded, the legacy automakers had unequivocally decided not to pursue EVs. By the time Tesla was producing Model S, the old guard was still piddling around, building electric compliance cars in low volumes. Only now, as Tesla appears to be on target to deliver half a million vehicles this year, are the legacy brands making plans to produce EVs in volume. They’re tearing down Teslas and trying to build similar vehicles, but the cars they’re copying are already yesterday’s models.

As Mr. Munster writes, “Over the next few years, it’s unlikely that traditional auto will close the EV market share gap.” He believes Tesla’s head start is not equivalent to the five years most writers cite, but more like seven or eight years, and calls it “a business miracle that very few companies ever achieve.”

Tesla totally rules the EV market in the US (it’s a different story in China, but Tesla is coming on strong there as well). Loup Ventures predicts that by the end of 2021, Tesla will own 70-80% of the US EV market.

The specific reasons for this are many, but, as we have argued many times in this space, the underlying issue is motivation. Caught in the Innovator’s Dilemma, the legacy automakers’ most logical strategy (at least in the short term) is to keep cranking out profit-spinning gas-guzzlers as long as they can, while deploying their marketing and lobbying power to delay the day of electrical reckoning.

The Achilles automakers may someday succeed in mounting a challenge to turtle Tesla, but Munster identifies a couple of advantages that the California carmaker enjoys at the current juncture. For one thing, the pandemic hasn't had the same impact at Tesla. At the time COVID crashed the party, Model Y was already rolling off the line. Despite Elon Musk’s outrage at being asked to keep the Fremont factory closed for an extra week, the brief production pause turned out to be a minor hiccup—Model Y deliveries are proceeding apace, and there’s no reason to doubt that, as widely predicted, the new model will turn out to be the most popular Tesla to date.

The legacy automakers, on the other hand, were caught in the middle of designing and developing their new generation of EVs, and as overall auto sales cratered, they faced pressure to cut costs. As Loup points out, out of seven new EV models that were slated to be released in 2020, five have been delayed until 2021.

The health crisis has also caused the online shopping trend to shift into high gear, and this can only benefit Tesla. Munster cites an April survey of US car buyers by CarGurus, which found that 61% of respondents were open to buying a car online, up from 32% before the pandemic. Here’s a perfect example of how Achilles tries to catch up to the tortoise, only to find that the terrapin has already moved on. The legacy brands are taking tentative steps toward an online sales model—Ford has opened an online showroom, and GM, in response to customer demand, has expanded its limited online ordering options. Meanwhile, Tesla has been adding new offerings to make its already comprehensive online sales process even easier, including Direct Drop delivery, a “touchless” delivery option for virus-wary buyers; and the ability to use Apple Pay for the $100 reservation fee.

At the moment, there are 14 or 15 EV models available in the US, and 4 of them are Teslas. Furthermore, several of the other models are available only in limited markets, and few dealerships outside of California are likely to have any decent selection of cars on the lot. All of Tesla’s EVs can be ordered from anywhere in the US with a couple of clicks.

Yes, the traditional brands have some very interesting new EVs coming out soon. Ford’s Mustang Mach-E, which is expected to have a price and range comparable to the Tesla Model Y LR, is scheduled to arrive later this year (by which time Tesla may just have introduced a new, cheaper variant of Model Y). Ford recently released some details of its electric F-150, but it won’t start rolling off the line until mid-2022 (by which time Cybertruck will have been on the road for a year).

Alas, poor Peleus’s son. Weighted down by thy massy armor, the spoils of past deeds of glory, thou strainest to draw nigh to yon temerarious tortoise, but it springeth ever forward.