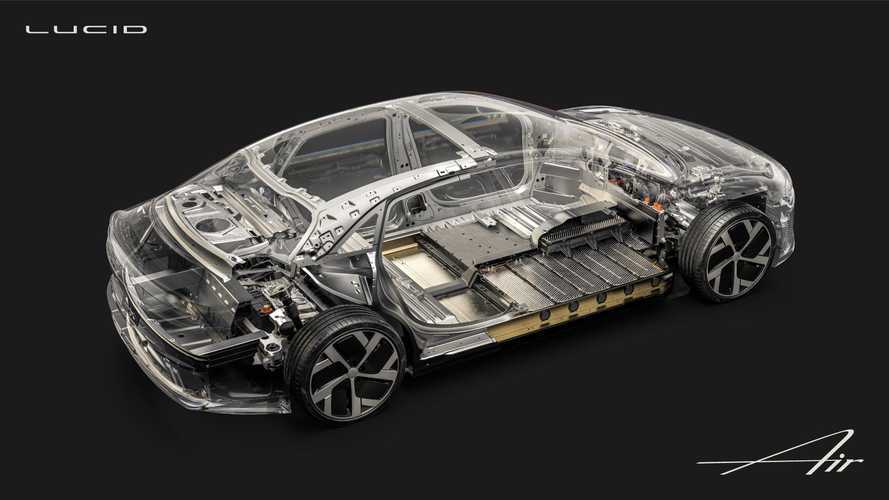 When the Lucid Air comes to market next year, it will arrive with "an innovative new design layout that provides more interior space and comfort than competitive luxury and EV offerings, including the largest EV frunk ever."

Lucid tells us that's possible because its "Space Concept" design, and due to the company's never-ending obsession with efficiency, one that extends beyond the drivetrain, and includes spatial efficiency as well.

We also learned more about the Air's world-class powertrain efficiency. We previously reported that the Lucid Air was EPA Range tested by a 3rd party, and achieved an amazing 517-mile estimated range. Up until now, all Lucid has said about the size of the battery was that it was less than 130 kWh. That lead us - and most other's reporting on Lucid, to assume the battery pack was just slightly under 130 kWh. We now know that wasn't a correct assumption.

“By pursuing this ‘smart range’ approach, Lucid shall not only be able to offer the Air with this unprecedented absolute range, but also offer future models that achieve competitive range from proportionately smaller battery packs, thereby saving cost, weight, and space. Lucid’s breakthrough is not merely just a few percent; we are talking about a significant improvement, which I shall cover further on September 9th. This represents a true breakthrough and what excites me the most for the future and for Lucid’s role in advancing electrification and sustainable mobility,” Rawlinson added.

In today's press release, Lucid has also announced the Air's battery pack will be 113 kWh. While we're not sure if that's the gross or usable capacity (we asked, they wouldn't offer that information), but either way it's pretty impressive. Even if it is the usable capacity, and the Air does have an EPA-range rating of 517 miles, that means it will have a consumption rating of 4.57 mi/kWh (13.55 kWh/100km) and will be one of the most efficient vehicles available when it comes to market. If 113 kWh is the gross capacity, then it's even more efficient.

Lucid's CEO and CTO Peter Rawlinson explained that any EV could have long-range, or "dumb range" as he called it if the manufacturer simply crammed more batteries into the vehicle. But that's not what Lucid did, they have achieved an incredible 500+ mile range by focusing on powertrain efficiency and class-leading aerodynamics.

The Lucid Air will also have the largest frunk in any electric vehicle, and boasts a capacity of over 280 liters. Lucid tells us that's 89 percent larger than the current leader in the Lucid Air’s vehicle class (Tesla Model S) and 40 percent larger than the current EV leader in the SUV class (Tesla Model X). Combining the frunk and the trunk, the Air will have a total of 739 liters of luggage space, which Lucid says is best-in-class for both electric and internal combustion engine vehicles.

Lucid will premier the production version of the Lucid Air in an online reveal on September 9, 2020. We're told that in addition to the vehicle’s final interior and exterior designs, new details about specifications, configurations, and pricing information will also be shared. We may also get to see more on Lucid's next vehicle, their SUV that was recently caught and pictured without any camouflage.