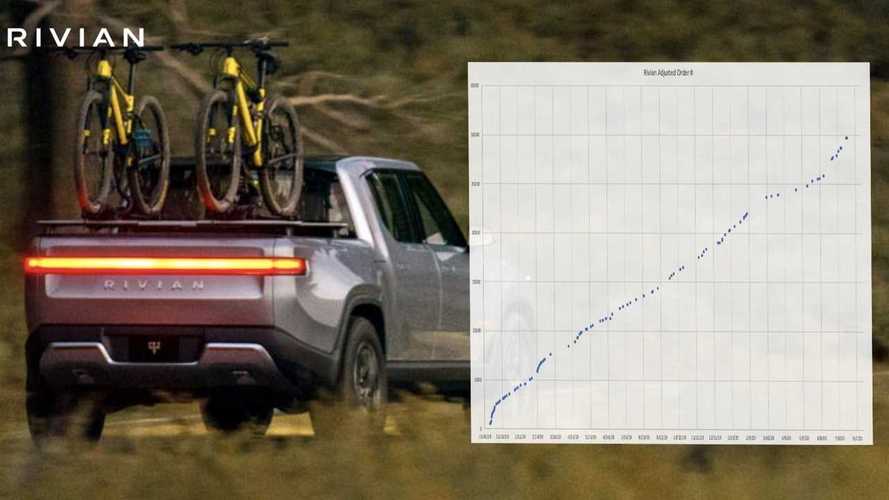 That’s much less than the Tesla Cybertruck, but the required deposit is much higher.

This article starts with a big "thank you" to our readers. We asked them to tell us their reservation numbers for the Rivian R1T, and R1S after a video from Detached Garage showed us how to obtain it. We thought we'd have a hard task getting the real amount of preorders, but that was spared thanks to Skyler Williams and John King. The answer is not 43: it is approximately 30,000, even if the reservation numbers are now around 56,000. How?

Williams was the person that discovered the method for getting the reservation order number. He posted it on a thread at RivianForums.com on July 28, 2020, and also on Facebook. King made some engaging projections based on the numbers they obtained from other forum members.

Williams made the graph below based on the reservation numbers he obtained.

The explanation for the real numbers is on something Williams observed from the numbers he managed to get: some jumps in the numbers that were not natural.

The first people to reserve their Rivian cars were apprehensive because they would not be the very first to receive their EVs, but that may have to do with the Shopify reservation system.

“Rivian used Shopify for the preorders.  It is standard for Shopify to start order numbers at 1,000.”

John King helped ease anxiety among reservation holders. He made timetables showing when the current reservations will get their cars based on the projected production of Rivian.

If it starts delivering the pickup truck by July 2021 and producing 20,000 per year, as promised, it will let everyone that order an R1T have their cars by August 2022, according to King's calculations. That happens because he works with a more precise number of preorders: 24,832. Williams is more careful and says his figures are based on big assumptions.

In another scenario, in which Rivian increases production by 1,000 units every six months, King predicts that all cars ordered so far will have been delivered by April 2022, as the inferior part of the image above shows.

King made another graph that shows the progress of the reservations related to the investments Rivian received. Check it below:

It would be nice to check the proportion of R1S clients compared to R1T customers, but only Rivian would be able to clarify all this in the most precise way possible. The question is if the company is willing to do that, especially when you compare the 30,000 reservations for the Rivian R1T/R1S with the more than 600,000 Tesla Cybertruck preorders we last reported.

If that is 20 times as much, the reservation fee for the Rivian vehicles is also 10 times higher, which is a factor to consider. The 30,000 people that decided to give Rivian $1,000 may be more confident of their decision than all the people that placed $100 for the Cybertruck. On the other hand, Rivian reservation holders can have their $1,000 back at any time. Cybertruck prospective clients either buy the electric pickup truck or say goodbye to their 100 bucks.

We have contacted Rivian to get the exact number of reservations. We also want to check if it can disclose how many are for the R1T and how many for the R1S. We'll keep you posted if the company is willing to talk.