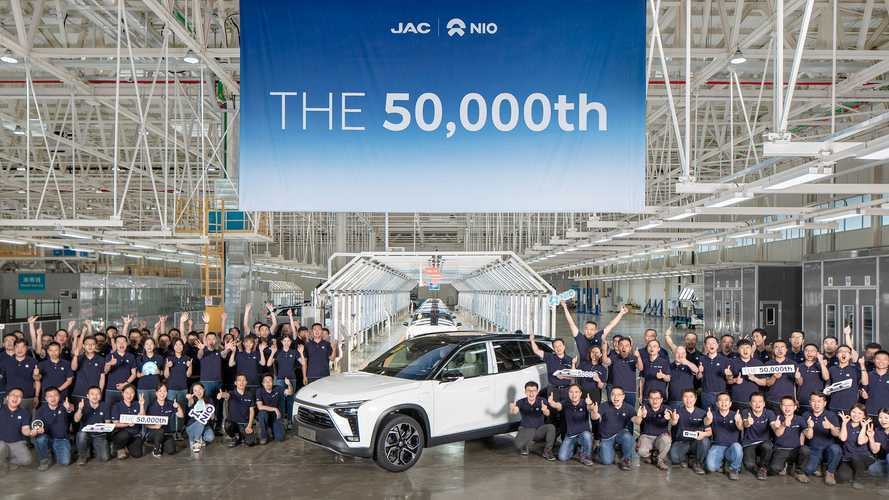 NIO and JAC Motors signed a joint cooperation agreement to establish a new manufacturing facility in April of 2016, and in October of that year, began construction of the facility in Hefei. The first NIO ES8 was produced in May of 2018 and 26 months later NIO has made its 50,000th vehicle at the plant.

NIO Shows Video Of Making Of The NIO ES6

NIO has been riding high of late and seems to have found its footing after a rocky few years. A key element to that success is the fact that NIO received nearly 1 billion in funding in April. The new investment group was led by the Chinese state-controlled Hefei City Construction and Investment Holding.

But that's just the beginning of the good news for the upstart EV maker. NIO set company sales records in April, again in May, and then again June, which is especially notable since China was still dealing with the lingering effects of the COVID-19 shutdown during that time.

Part of that success can be attributed to NIO thinking outside of the box and hosting a livestream event in May to showcase its vehicles. The livestream was presented by Li Bin, the founder, chairman, and CEO of NIO, and with well-known Chinese personality and NIO owner, Li Rui.

During the 40-minute livestream, NIO raked in a total of 320 orders (with non-refundable deposits) totaling $18 million. NIO also scheduled 5,288 test drive appointments during the event.

While 50,000 vehicles aren't a huge number for established automakers, startups have to start somewhere, and producing 50,000 vehicles in a little over two years is very good compared to many other startups. Tesla, for example, is perhaps the most successful automobile startups in recent times and they produced their 50,000th Model S in roughly the same time frame that it's taken NIO to reach 50,000 vehicles.

The good news for NIO is likely to continue as the company is about to begin customer deliveries of its 3rd vehicle, the EC6. The EC6 is a Sportback version of the ES6 mid-sized SUV. For comparison, the EC6 is 4" longer, 1" wider, and 5" taller than a Tesla Model Y. I had the opportunity to see the EC6 at its unveiling event last year and to me, it looked like it would fit perfectly between a Model Y and a Model X, size-wise at least.

The EC6 will be available in three battery sizes; 70 kWh, 84 kWh and 100 kWh. Like all NIO vehicles, the EC6 will come with unlimited free battery swapping at NIO battery swap stations. If you're too busy to stop at the swap station, a NIO employee will pick up your vehicle while you're working, swap the battery, and return it to your parking spot - also for free.

Are you a NIO fan or not? How about their battery swap service, is it a genius move or a waste of time? As always, we want to hear your opinions in the comment section below.