BMW bets on in-house production of high-voltage batteries and electric motors in Dingolfing.

BMW Group has officially opened its new Competence Centre for E-Drive Production at the Dingolfing manufacturing site in Germany.

Its production capacity was set for more than 500,000 electrified vehicles annually by 2022, with an option for more.

The new facility will supply the company with 5th generation E-Drives, which combines the electric motor, transmission, and power electronics in a central housing. The first model with 5th gen E-Drive will be the BMW iX3.

The huge Dingolfing plant was already producing battery modules and packs since 2013 (starting with the BMW i3) and then also electric motors since 2015.

The site is able to produce everything necessary for EVs, from complete electric drive units, to battery modules and packs, and finally electrified versions of some models. 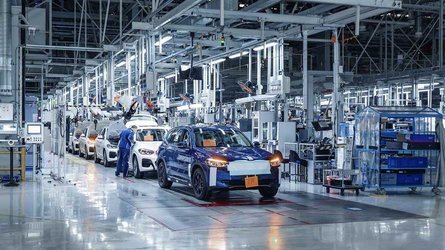 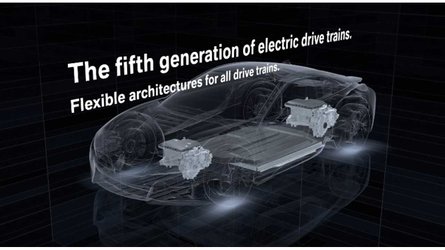 BMW Preferred Flexibility But It May Soon Switch To Dedicated BEVs

The total investment in the Competence Centre for E-Drive Production in Dingolfing is estimated to reach €500 million ($562 million) by 2022.

The number of employees dedicated to the electrification has increased from 600 to 1,000, and should further increase to 2,000 in the medium term.

"At the Competence Centre in Dingolfing, the BMW Group will produce electric powertrain components such as battery modules, high-voltage batteries and electric motors on eight production lines. Over the coming years, the company will set up four additional lines, which will boost the location’s production capacity significantly."

"In the next few years, the production area of the Competence Centre for E-Drive Production will be expanded to ten times the original size: from 8,000 square metres in 2015 to 80,000. The number of employees will also be increased. In the first half of 2020 alone, the workforce grew from 600 to 1,000. Up to 2,000 employees will work in production of e-drives at the Dingolfing location in the medium term."

The second site of EV electric motor production is in Landshut, Germany.

From 2021 Dingolfing will start production of the all-new, all-electric BMW iNEXT, along with conventional and plug-in hybrid 5 Series and 7 Series models, as well as a conventional 8 Series.

In the near future, the next generation of the BMW 7 Series will be produced in four versions, including gasoline, diesel, plug-in hybrid, and – for the first time – a fully-electric variant.

The modules and packs are however assembled by BMW at four sites:

Additionally, BMW has an all-new R&D facility in Munich, and partnership deals with Northvolt and Umicore.

BMW Group steps up electromobility: E-drives for half a million electrified vehicles

Munich/Dingolfing. The BMW Group is stepping up its e-mobility ramp-up and setting new standards for the transformation of the industry with its production. Today, at its largest European manufacturing location in Dingolfing, the company opened the Competence Centre for E-Drive Production. Having produced electric powertrain components in Dingolfing since 2013, the BMW Group is now expanding its capacity significantly. Bavarian Minister-President Markus Söder and Chairman of the Board of Management of BMW AG Oliver Zipse symbolically launched production of the new, highly integrated BMW e-drive, which combines the electric motor, transmission and power electronics in a central housing. The new generation of the BMW e-drive will be used for the first time in the new BMW iX3, which will go into production in China in late summer.

At the Competence Centre in Dingolfing, the BMW Group will produce electric powertrain components such as battery modules, high-voltage batteries and electric motors on eight production lines. Over the coming years, the company will set up four additional lines, which will boost the location’s production capacity significantly.

Chairman of the Board of Management of BMW AG Oliver Zipse said at the inauguration: “We continue to ramp up electromobility and set standards for the transformation of our industry. By 2022, in Dingolfing alone, we will be able to produce e-drives for more than half a million electrified vehicles per year. At the same time, we will produce a mix of fully-electric vehicles, plug-in hybrids and models with a combustion engine on a single line, as required by demand, so we can offer our customers the ‘Power of Choice’. This shows how we have paved the way for making the shift in our industry a real success story.”

In the next few years, the production area of the Competence Centre for E-Drive Production will be expanded to ten times the original size: from 8,000 square metres in 2015 to 80,000. The number of employees will also be increased. In the first half of 2020 alone, the workforce grew from 600 to 1,000. Up to 2,000 employees will work in production of e-drives at the Dingolfing location in the medium term.

“Our unique expertise in producing high-voltage batteries and electric motors ensures our technology is always state of the art and we are able to ramp up production quickly and systematically in line with demand,” explained Michael Nikolaides, head of Planning and Production Engines and E-Drives. A quarter of BMW Group vehicles sold in Europe should have an electric drive train by 2021; a third in 2025 and half in 2030. By 2023, the BMW Group will offer its customers no fewer than 25 electrified models – around half of them with a pure electric drive train.

The BMW Group possesses extensive expertise throughout the entire value chain. Both the new, highly integrated e-drive and new high-voltage batteries were developed in-house in close cooperation between development departments and production. The company is pooling its expertise in large-scale standard production of electric drive trains at the Competence Centre for E-Drive Production and thereby ensuring efficient production that can respond to demand for drive trains for fully and partially-electric vehicles at short notice. “Experience with our flexible production system for combustion engines has been fed into the design of our e-drive production. As a result, e-drive production is also able to respond quickly to demand for BEV and PHEV vehicles. In this way, we are realising the ‘Power of Choice’ for our customers,” explained Nikolaides.

The Competence Centre has also standardised the technology used in production of battery modules for new fifth-generation high-voltage batteries, refining the process to reflect the growing range of electrified models and allowing different module variants to be produced on the same line. In this way, the company is not only setting the course for production technology, but also securing jobs and key qualifications.

Dingolfing site transforms itself for electromobility

“BMW Group Plant Dingolfing is a perfect example of how the automotive industry is transforming itself for e-mobility. We have everything under one roof here: production of batteries, electric motors and electrified vehicles,” explained Christoph Schröder, head of BMW Group Plant Dingolfing. Today, around ten percent of the vehicles produced in Dingolfing are already electrified. With the launch of the BMW iNEXT in 2021, Plant Dingolfing will be capable of producing fully-electric vehicles, plug-in hybrids and models with a combustion engine on a single line. “That’s how we are implementing the ‘Power of Choice’ in car production,” Schröder added. These highly flexible structures will also benefit the next generation of the BMW 7 Series, which will be produced at the site and released onto the market as petrol, diesel, plug-in hybrid and – for the first time – fully-electric variants.

Dingolfing has years of expertise building components for electric vehicles. Series-produced high-voltage batteries for the BMW i3 have been coming off the line here since 2013. This location has also produced electric motors since 2015. The majority of high-voltage batteries and electric motors for all BMW Group electrified vehicles come from the Competence Centre for E-Drive Production. The existing structures of a large former parts warehouse belonging to BMW Group aftersales logistics have been retrofitted and used for this purpose in recent years.

“At the same time, we have driven the long-term shift of competence at the location by providing employees with targeted training for new tasks and extending development into electromobility as an area of future activity,” said Chairman of the Dingolfing Works Council Stefan Schmid. “Further education and qualification are key to a successful transformation.”

The BMW Group has a highly flexible production network for electric drive trains. The high-voltage batteries needed for electrified vehicles come from the company’s three battery factories in Dingolfing, Spartanburg (USA) and Shenyang (China). The BMW Group has also localised battery production in Thailand, where it is working with the Dräxlmaier Group. BMW Group Plants Dingolfing and Landshut produce electric motors. The Battery Cell Competence Centre in Munich covers the entire battery cell value chain, from research and development to battery cell composition and design, all the way to large-scale manufacturability.

On the same day as the official opening, the Competence Centre also began production of the fifth-generation electric drive train. This highly integrated electric powertrain component combines the electric motor, transmission and power electronics in one housing. Materials considered rare earths are also no longer required. The drive train is compatible with all vehicle concepts and will be available with various power levels for different models. The system’s highly integrated design increases power density significantly.

The fifth-generation BMW eDrive technology features new and more powerful high-voltage batteries. Thanks to their scalable modular design, these can be used flexibly in the respective vehicle architecture and at the respective production locations. The Competence Centre is currently preparing to ramp up production of these new high-voltage batteries.

Sustainability and security of supply are important factors in the expansion of electromobility. The BMW Group sources the battery cells needed for production of high-voltage batteries from leading system suppliers who manufacture the cells to the BMW Group’s exact specifications.

For the BMW Group’s purchasing experts, ethically responsible raw material extraction and processing starts at the very beginning of the value chain: They take a keen interest in battery cell supply chains – all the way down to the mines themselves. Compliance with environmental standards and respect for human rights are top priority.

For its new fifth-generation electric high-voltage batteries, the company has restructured its supply chains and will source cobalt and lithium for battery cells directly from 2020. This ensures full transparency over where these two important battery raw materials come from. Supply contracts also guarantee supply security up to 2025 and beyond. Going forward, cobalt will be sourced directly from mines in Australia and Morocco, while the lithium will come from Australia and other countries.