According to the company, as long as the distances between the ground pad and vehicle pad are "reasonable" (assuming the same size 'matching and good alignment), electricity transfer through system, including air induction via magnetic field, is very efficient - comparable to copper.

In the case of Momentum Dynamics, the total efficiency (from the grid to the battery) at 300 kW is between 92% and 94% at an air gap of about 7" (19 cm). That's actually similar to a standard 50 kW DC fast charger. The air gap can be made greater or smaller.

Here is a side-by-side comparison, provided by Momentum Dynamics, at our request: 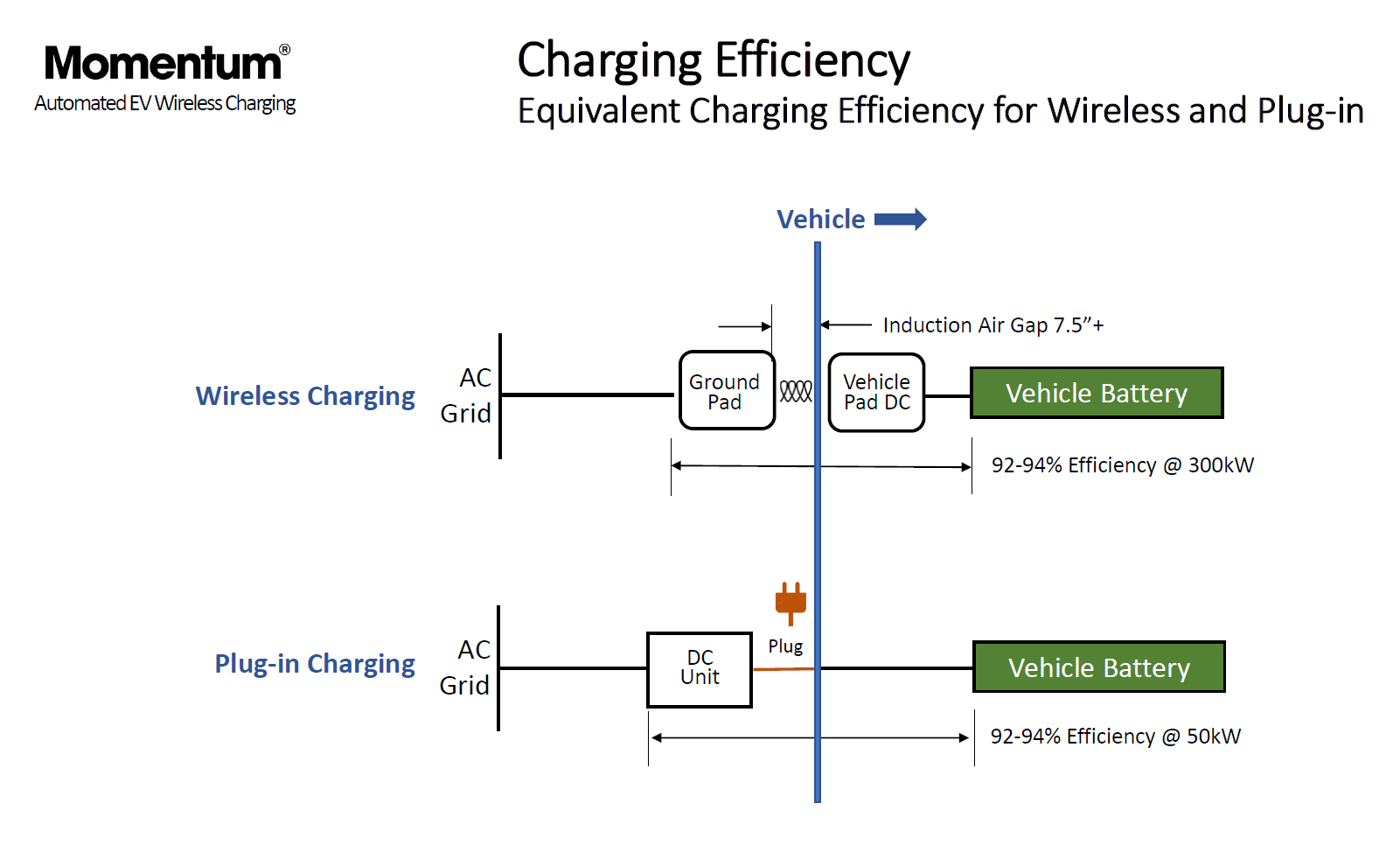 The company explains that most of the losses are really in the cables to the equipment and in power electronics (similarly in both cases), because the air is not a resistor: "Up to the air gap, and after it, we look just like a DC fast charger."

Momentum Dynamics points out that the charging losses increase in conductive chargers together with an increase of power, because the losses increases in a square of the current (assuming the same cable length, diameter, and voltage). This means that the 350 kW chargers, at least in this aspect, might be less efficient than 50 kW units (plus, there is a need to power the cable cooling system).

The other aspect to consider is that the ‘charging’ on an AC plug-in charger for your car sits on the car itself and needs cooling. The DC charger actually sits on the ground but requires significant cooling - and thus more losses.

In its wireless charging system, Momentum Dynamics keeps the current below 125 A in the primary inductor (ground pad). One would ask how they can do that if the power is 300 kW? Well, they are using a modular system, with up to 75 kW per single wireless charging module or pad. By increasing the number of modules, the power can be scaled up. As a result, you can achieve high power and limit power losses.

We guess that an equivalent of this approach in conductive charging would be to have a few cables and plugs in parallel. Just imagine four cables/plugs to increase the total diameter and limit the losses. 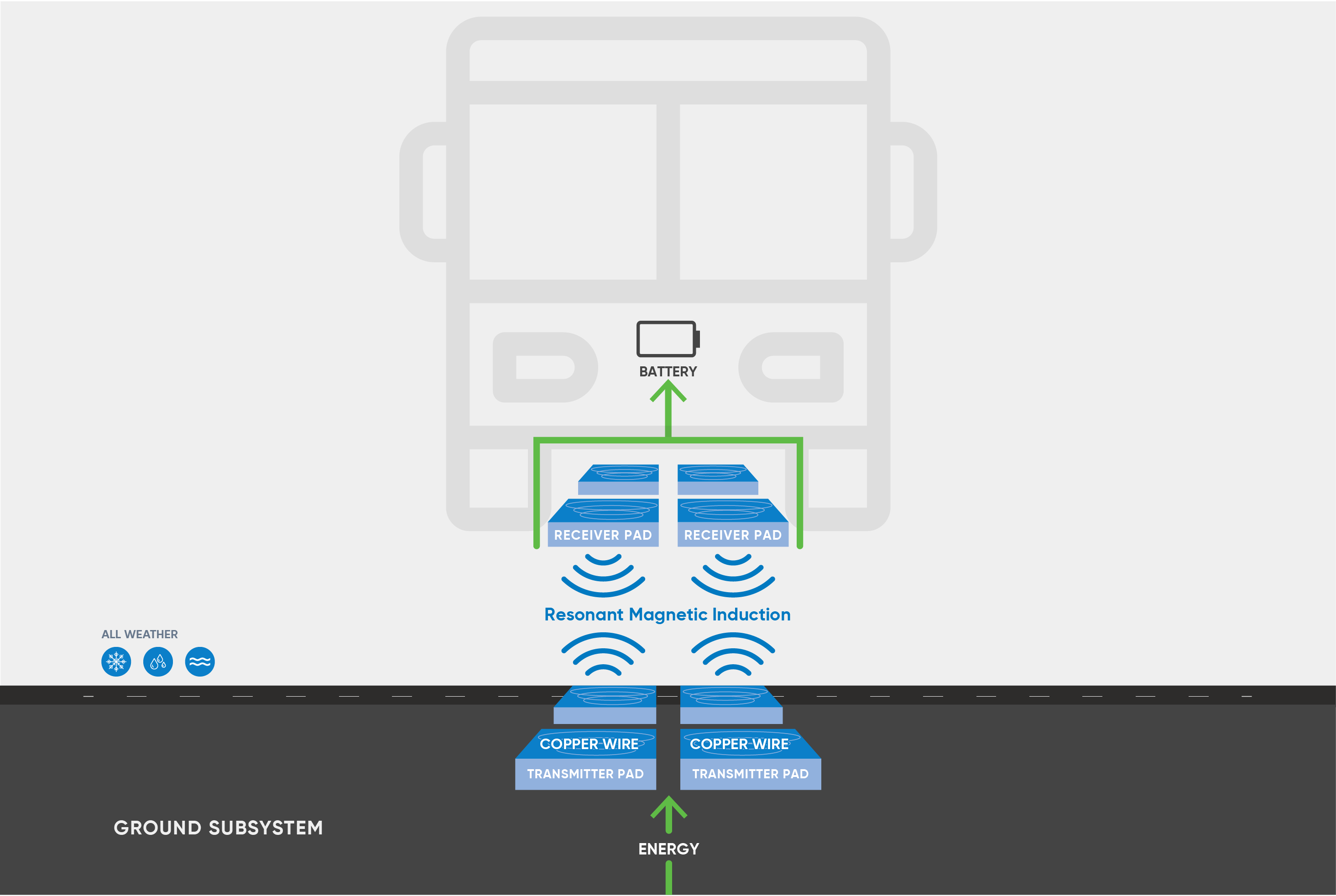 The first wirelessly charged bus in the Link Transit fleet (from our earlier story) was the BYD K9S (266 kWh and 145 miles/233 of range), equipped with four 50 kW modules for a total of 200 kW. Most recently the company ordered 10 new buses with a 300 kW system.

From an environmental point of view, the company reassures us that the pads don’t radiate energy and actually don't even get hot.

Finally, Momentum Dynamics said that the total cost of installation is about the same as the conventional charging infrastructure.

However, the main benefit of using wireless charging is the simplicity of operation, as once the vehicles stop over the charging station, it can start charging automatically. There is no need to go plug in and then disconnect. This saves on labor time and keeps a vehicle in-service all day. This is worth considering even if the stop is just for several minutes at the end of the route (similarly to pantograph fast charging but without the mechanical alignment). Another benefit is no visible cables - something that matters to depot owners and increasingly to city planners. 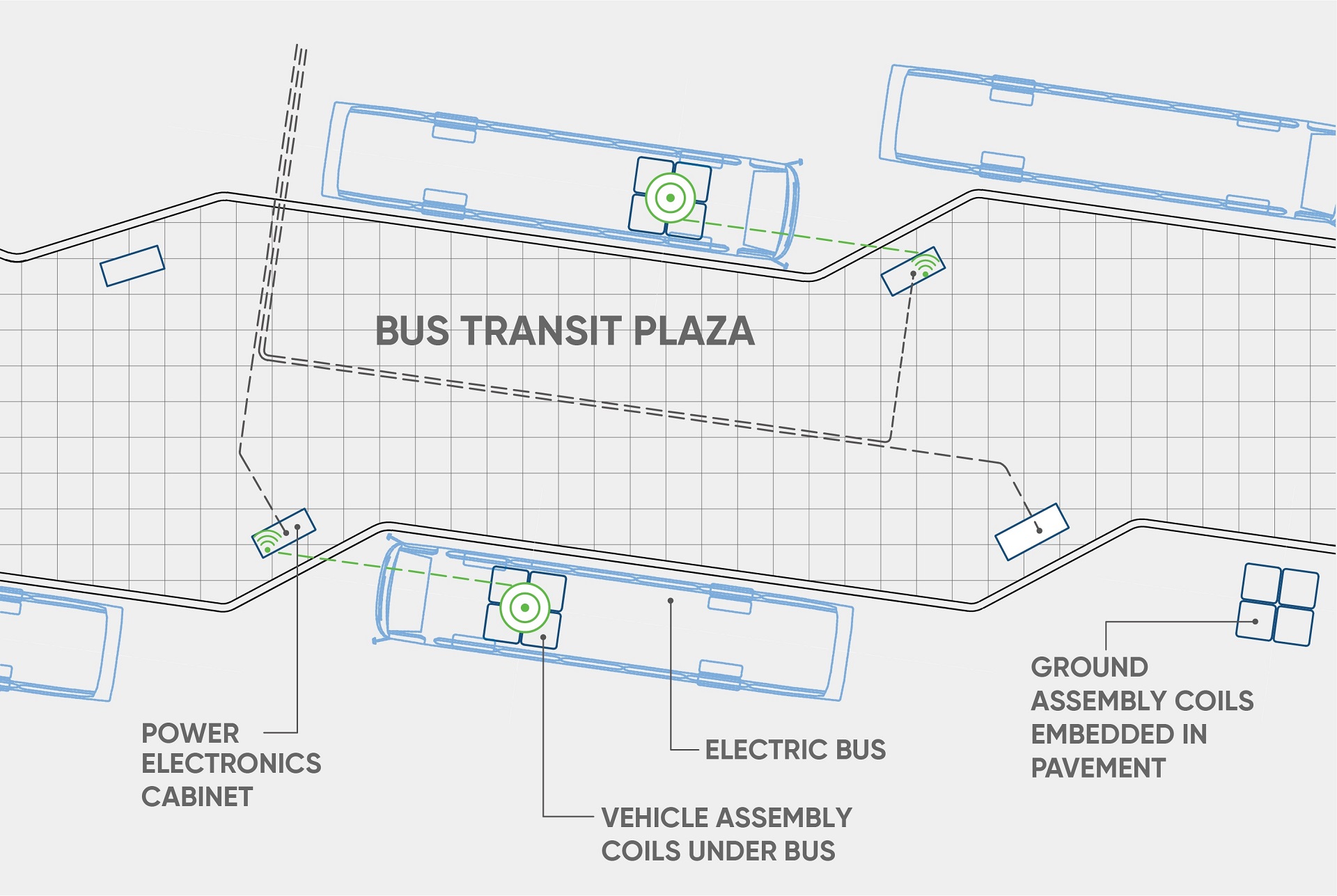 According to Momentum Dynamics, regardless of the difference in efficiency (1% gain or loss here or there), the much more important concept is the high utilization of vehicles that are already quite expensive.

By keeping these vehicles in service through ‘opportunity’ or partial charging while, for example, boarding passengers, rather than having to return to depot for charging, fewer vehicles are needed to service a route.

Increasing the range of EVs for fleets is vital if adoption is to increase. This looks like a very effective means of doing that. And maybe the ‘range wars’ of bigger batteries don’t need to happen.

If a flexible system allows for limiting the battery pack size, take more passengers on-board, and stay on the route through the day, it's the most important measure overall. As shown below, in terms of overall operational efficiency, the advantages are clear. 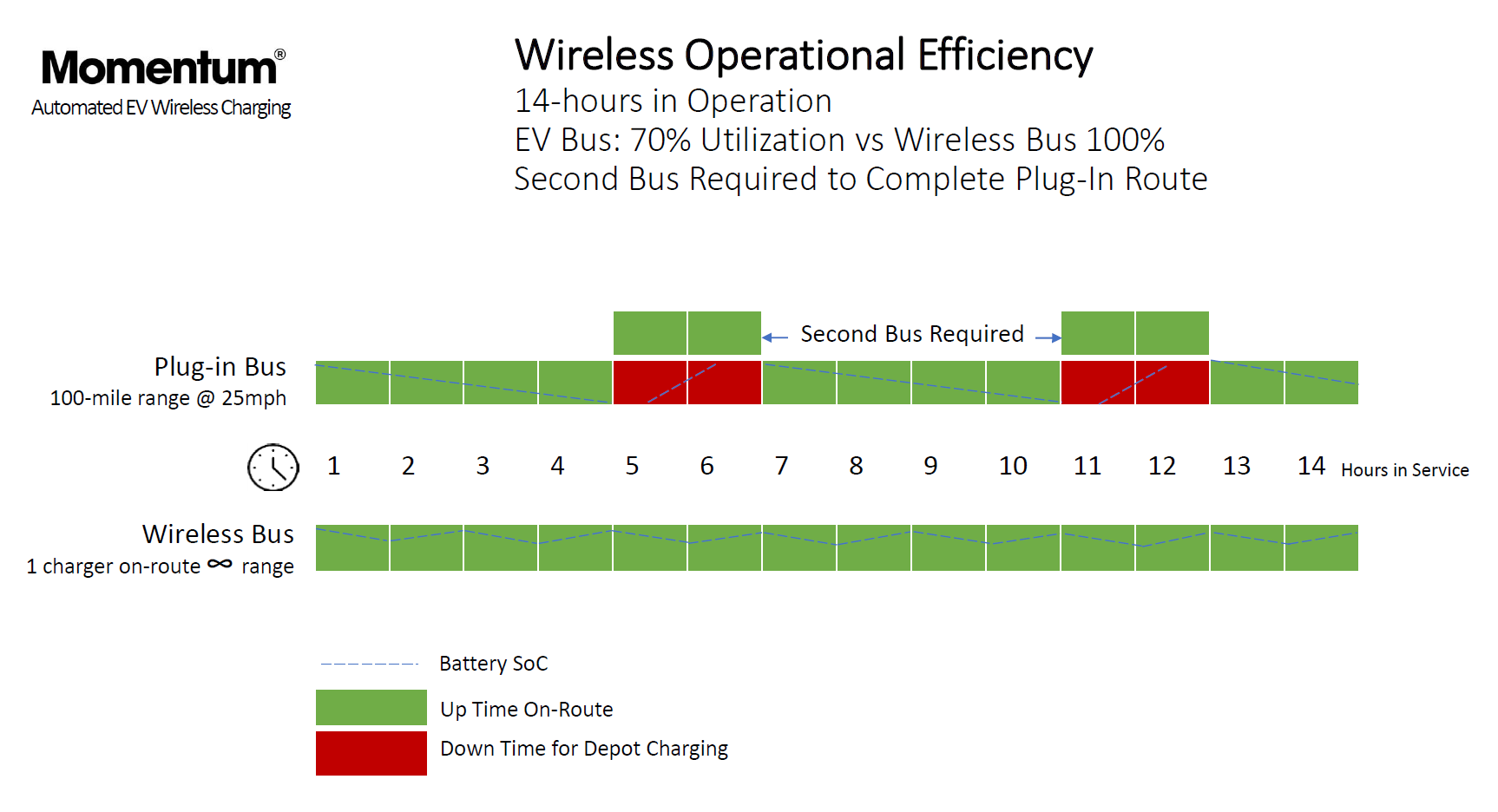 *Charging takes place after each route, when the bus would stop for at least several minutes or more. No time is lost compared to a diesel bus.

That would probably explain the popularity of roof charging systems in Europe to date. This system looks even simpler and just as effective.