April was really bad... let's hope it will gradually improve in the following months.

France was severely affected by the COVID-19 lockdown and new car sales collapsed 88.8% year-over-year to just 20,997. New plug-in electric car registrations also followed the general trend and are down 67% year-over-year to 1,745.

The only positive thing is probably that 1,317 new passenger plug-ins allowed EVs to maintain a high market share of 7.8%.

Sales after the first four months:

One of the biggest surprises for the month of April is that for the very first time we see that Renault ZOE is not the top-selling model!

It is, of course, an exceptional situation, but this time the highest number of new registrations was achieved by the Peugeot e-208 (360, compared to 322 ZOE). Tesla Model 3 was third with 189 registrations.

And here is another surprise: Citroen C-Zero (one of the triplets with Mitsubishi i-MIEV and Peugeot iOn) was the fourth-best BEV with 89 registrations! That's quite an achievement, especially since that, for example, the Nissan LEAF disappeared from the top 10. 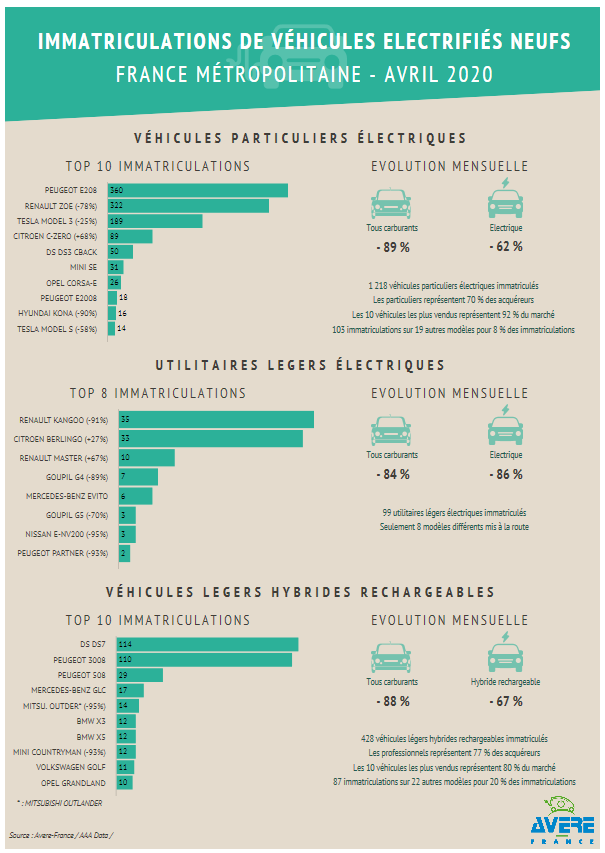